A walk on the bright side 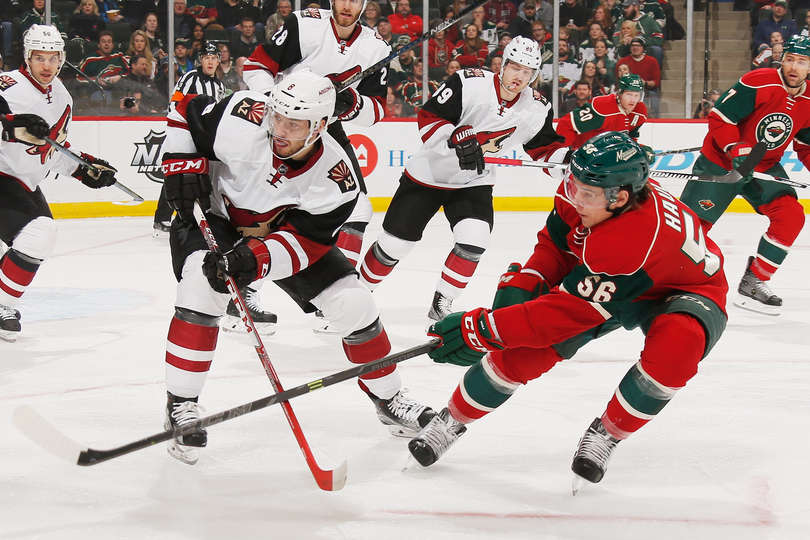 St. Paul – Following a 2-1, come-from-ahead, shootout loss to the Arizona Coyotes, this could be another in what has become a series of Minnesota Wild stories detailing the team’s struggles to put pucks in the net. But that’s not the case.

I could bore you with the fact that the Wild had been held scoreless in five consecutive periods at home before Charlie Coyle’s third-period goal on Monday night. And I won’t mention that Coyle’s goal was just Minnesota’s fourth in its past four games at Xcel Energy Center.

I could point out the obvious that the Wild have lost all five home games in calendar year 2016 (0-3-2) marking just the third winless month at the ‘X’ in franchise history (March 2001, December 2001).

I’m even going to leave out the continuing struggles of “top liners” Mikael Granlund and Jason Pominville who are doing Zach Parise no favors whatsoever. You certainly won’t see Minnesota coach Mike Yeo address it by saying, “It’s not like we have anybody else that’s exactly lighting it up right now. We’re talking about some major, major slumps.”

You won’t read here about how Coyle’s goal midway through the third period nearly stood up as the game winner. That was until Wild goaltender Devan Dubnyk mishandled a puck behind his own net with his team on a power play.

Arizona’s Tobias Reider capitalized on the turnover and quickly fed teammate Antoine Vermette whose shot from the right circle clipped the diving Jared Spurgeon before landing in the vacated Minnesota net with 1:13 to play in regulation. Mum’s the word on that, however.

You’ll have to look elsewhere to learn how penalties led to an entire overtime without 3-on-3 hockey and how a questionable goaltender interference call cost the Coyotes what would have been an overtime winner. But it didn’t matter as Arizona’s Anthony Duclair scored the lone shootout goal of the night giving the Coyotes an improbable 2-1 win.

Nope, tonight is going to be all about the positives.

Outside of his late-game mishap, Devan Dubnyk was very good in his All-Star game tune-up. After seeing little action through two periods, Dubnyk made 17 of his 23 saves in the final period alone, including a spectacular glove save on Arizona’s Viktor Tikhonov with 8:53 to go.

“I think we played a good game, a game that we should have won.” Dubnyk said. “That’s the way you have to look at it, I think.”

That Dubnyk had little to do through 40 minutes was a credit to a suffocating Minnesota defense which limited the Coyotes to just six shots entering the third period. Coyle’s 13th goal of the season is a career high and gives him a three-game goal streak.

“I thought we played okay,” Parise said. “I didn’t think we played a bad game, I mean, we just couldn’t get a second goal.”

Eight of Minnesota’s 10 January losses have been by one goal including one in overtime and two by shootout.

“It’s not like we’re losing by three, four goals right now,” Yeo said. “We’ve got guys who have scored before, we’re not scoring right now, and we’re creating chances but the puck’s not going in.”

Minnesota has points in 17 of its 25 home contests this season in compiling a 14-8-3 record in St. Paul. Entering the All-Star break, the Wild is in a much better position than a year ago as their 55 points is nine more than 2015 when the team was on the outside looking in as far as the playoffs were concerned.

“I’m certainly not going to point to excuses of bad luck or misfortune or whatever,” Yeo said. “It’s in our control, we’ve got a group that’s good enough to win and we’re giving ourselves a chance but we’re not grabbing it.”