I Wanna Be Phil Pritchard 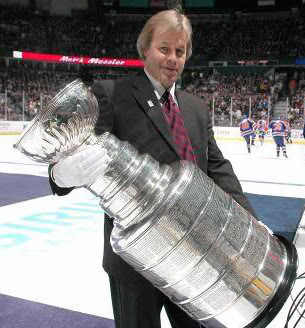 Everywhere Lord Stanley’s Cup goes, so does Phil Pritchard.  He is the man with the timeless flowing blond locks and the owner of the classy white gloves who is known as “The Keeper of the Stanley Cup.”  We see him during the Stanley Cup finals as the case that holds the most recognizable trophy in all of sport is wheeled in when a potential Cup clinching game is played.

He has over 41,000 Twitter followers and now has a song written by Twin Cities Blues and Jazz artist J. Elliott Parker.  The song titled, “i Wanna Be Phil Pritchard” was released just in time by Parker as Pritchard, the subject of the song, may be presenting the Stanley Cup to the Los Angeles Kings who are looking to close out the New York Rangers with a four game sweep Wednesday night.

The song was inspired by a 2004 encounter at the NHL All Star game that was hosted at the Xcel Energy Center in St. Paul, MN.  The Cup was on hand and so was Pritchard.  The Keeper of the Stanley Cup was standing watch over the Cup watching as thousands of fans poured by and took in the trophy.

Parker, a hockey fan, felt as though there could be some great stores that ‘The Keeper of the Stanley Cup would have in his travels.

Parker approached Pritchard who was standing alone at the X for a conversation.  What Parker wanted to lear were the stories of the individual players and their customary day with the cup.  Parker instead learned those stories would stay as sacred as the Cup itself.  Pritchard would not budge in sharing stories.

“I tried to gently shake lose a few nuggets,” Parker recalled.  “But he wouldn’t budge.  So, the one story he could tell was his own.”

Pritchard’s story was enough to inspire Parker to write a song about young Pritchard’s early job at the NHL Hall of Fame which eventually led to his current title.  It is one that he has held for more than two decades  According to Parker who tells stories in his music and brings an old school approach to his pieces.

“It’s old school, but I have to fully believe in what I am writing otherwise I am wasting my time and anyone else who listens,” Parker stated.  “Whether famous or unknown, there are incredible stories out there to tell.  Phil just happens to live a life millions would love to live.  I am surprised no one picked up on his story.”

Parker spent considerable time with Pritchard and said,  “I spent 15 maybe 20 minutes with him but, sometimes that is all it takes,” Parker said of his meeting.  “My take away was that he was born to do what he is doing.  Fate.  I know that sounds odd, but I think this guy was born with white gloves.  Phil is soft spoken, at ease and seems to be in complete control.  Perhaps the aura of the cup plays a part of it, but he is just a likable guy.”

Out of that discussion came a likable tune by Parker and we have it here exclusively for you to hear on the MNHockeyMag.com.  If you would like to purchase the song from Itunes, a link is included below this article.