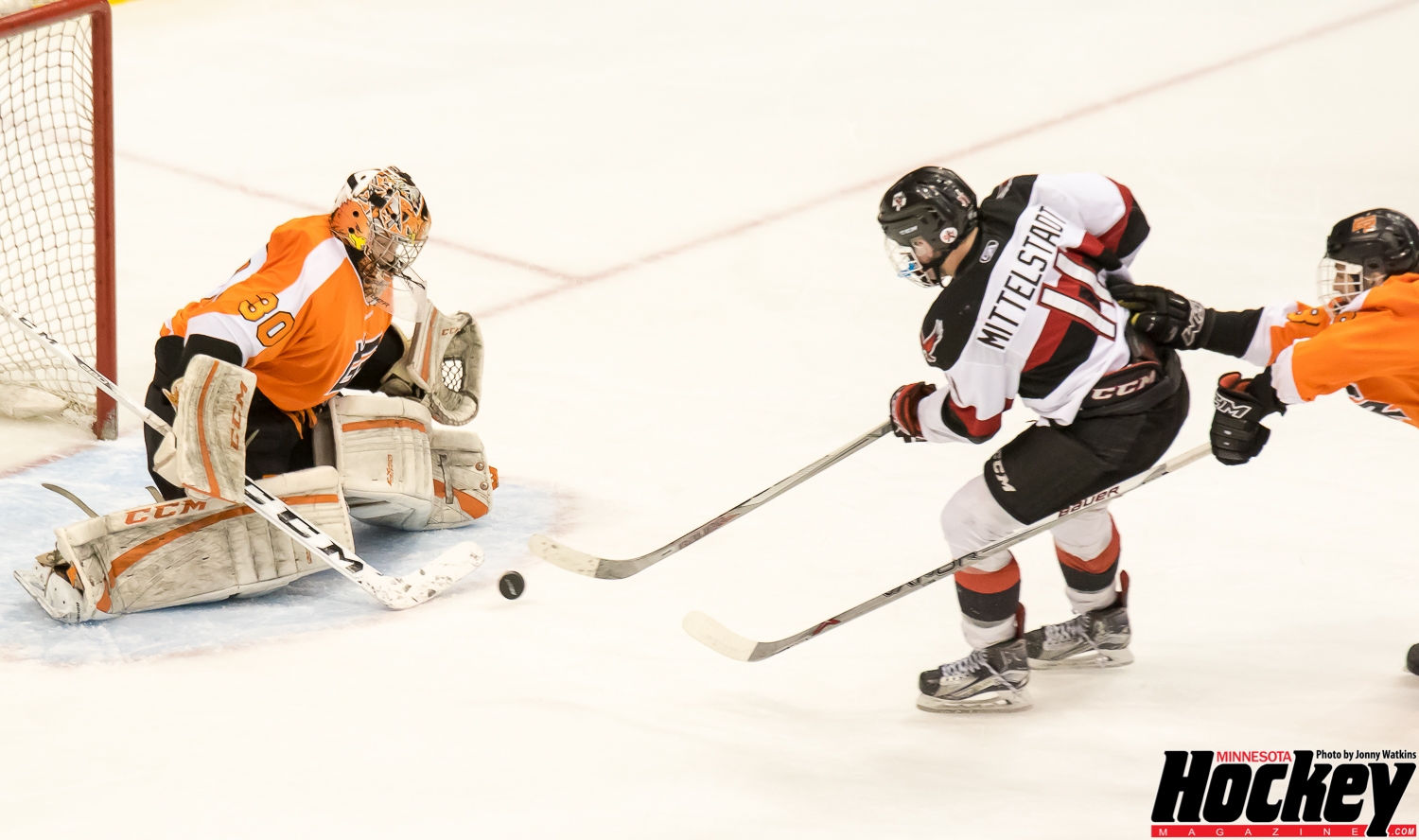 After his team’s Class 1A quarterfinal win over St. Cloud Cathedral on Wednesday night, St. Paul Academy coach Matt Funk said, “Big players step up in big games.” While Funk was referring to one of his own players, he could have just as easily been describing Eden Prairie’s Casey Mittelstadt.

The junior forward notched a hat trick and chipped in a pair of assists before the second period was finished in the Eagles’ 6-2 Class 2A state tournament semifinal win over Grand Rapids on Friday night at Xcel Energy Center.

The five-point night comes on the heels of a six-point masterpiece (1 goal, 5 assists) in Eden Prairie’s 7-3 quarterfinal win over Anoka on Thursday night. In five career state tournament games over two seasons, Mittelstadt has racked up 13 points (6-7–13).

“He picked us apart pretty good tonight and he’s a heck of a hockey player, he’s gonna play for a long time,” Grand Rapids coach Trent Klatt said. “In high school hockey when you have guys of that ability it’s very hard to defend.”

Mittelstadt’s second and third goals, the first one shorthanded, sparked a four-goal second period for the Eagles. The outburst snapped a 2-2 second period tie and launched the Eagles on their way to their third state championship game in school history.

“Talk about a guy taking over a game,” Eden Prairie coach Lee Smith said. “He can be humble about it, but at 2-2 he decided to really crank it up another notch.”

While the record-breaking 22,244 session attendees were treated to a double dose of entertaining contests, the contrast between Friday night’s two Class 2A semifinal matchups could have hardly been more stark. Wayzata and Stillwater, with a combined six state tournament appearances, opened the evening deciding which school would earn its first title game berth and the Trojans prevailed in dramatic fashion.

Eden Prairie and Grand Rapids, on the other hand, stepped on the ice for the nightcap toting 24 trips to state and five championships between them. The game did nothing to diminish their tournament pedigrees as the Eagles and Thunderhawks delivered a semifinal with championship caliber speed, intensity and physicality, particularly in the second period.

First period goals by Mittelstadt and Michael Graham gave the Eagles a 2-0 lead after one period and Eden Prairie appeared to be in control with a 17-8 advantage in shots.

But Grand Rapids came out of the intermission flying on fresh ice with 1:45 of power play time carried over from a first period penalty to Eden Prairie’s Nolan Sullivan. Micha Miller’s power-play goal at 1:29 got the Thunderhawks on the board and Thursday night’s overtime hero, Alex Adams, tied it just 11 seconds later.

“I think we might have got a little too loose,” Mittelstadt said. “We were pretty excited after the first [period].”

The Grand Rapids surge was on at that point as the Thunderhawks picked up their speed and physical play. Miller, whom Klatt referred to the night before as “a difference maker” with his speed, used his gift to draw another Eden Prairie penalty and the momentum was all with the orange and black.

After watching his team get off to a slow start in the opening period, Klatt felt his team was finally playing, “the way we wanted to.”

“It was a breath of fresh air,” he said. “It was a good response by our guys, we just weren’t able to sustain it.”

With teammate Louie Roehl still in the penalty box, Mittelstadt seized the momentum right back in a matter of seconds.

Mittelstadt stripped the puck from Grand Rapids forward Jonah Bischoff along the right wing boards, drove below the circle and deposited the puck behind stunned Thunderhawks goaltender Gabe Holum.

“I think it just showed our character and we kind of came together after they got the two [goals],” Mittelstadt said. “We just kind of settled it down … and started rolling again.”

“They all responded well when No. 11 got going,” Smith said.

Mittelstadt broke in alone on Holum who stopped the shot. But as Brendan attempted to clear the loose puck from the crease he inadvertently swept it across the goal line. Mittelstadt, who was at the end of a long shift, had already turned toward the bench by that time and thought a linemate had scored.

“I was about to change; I was dead,”Mittelstadt said. “I thought he hit it in because he started yelling my name. I just saw it on the board, it was pretty lucky, but obviously I’m not going to complain.”

Senior forward Lawrence Cole delivered back-breaking goals late in the second and early in the third to give the Eagles some breathing room.

But it was Mittelstadt’s performance which made the difference and evoked memories of another accomplished Eden Prairie star.

“When we had Kyle Rau he always had that warrior in him,” Smith said. “Casey really showed that tonight.”