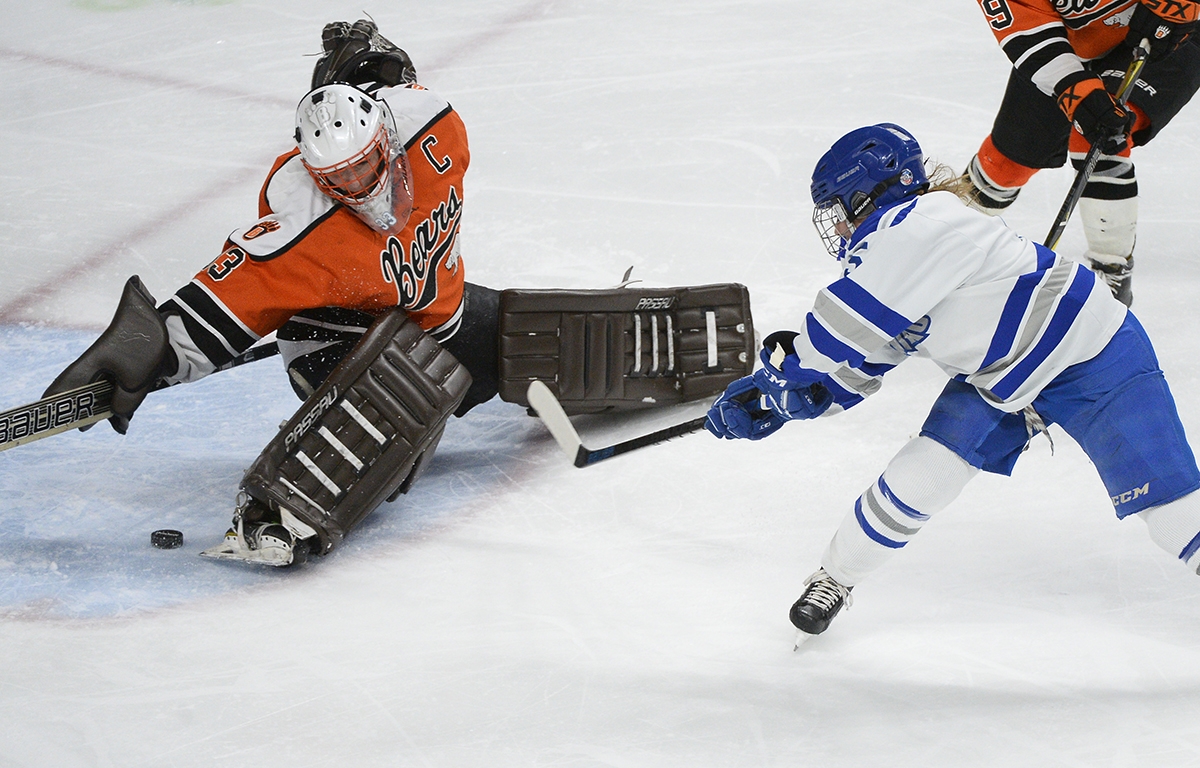 So naturally the storyline heading into the Brainerd/Little Falls Warriors and the White Bear Lake Bears quarterfinal game at the Class AA 2019 state tournament was all about goaltending. Both netminders had strong numbers and low scoring was anticipated.

Frank hadn’t allowed a goal since the regular season and had stopped all 115 shots in section play.

Meanwhile, Warriors goaltender Olivia King had a GAA of 1.66 in the regular season.

But it was Brainerd who cracked the code and ended up scoring a pair of first period goals five-minutes apart; ending Frank’s impressive shutout streak in a 4-0 win.

“One of the things we did stress was that we needed a good start,” said head coach Jim Ernster after the win. “Anytime you can start out and score first, that’s a huge advantage. Especially for us because coming down the stretch of sections we were struggling a bit to score.”

Frank admitted she got beat on the first goal by Warriors senior Cheyenne Abear, but wanted the second one back.

“For sure the second one,” said Frank, who faced 39 shots in the loss. “I ramped up my stick a bit and it’s just a fluky goal and I don’t really have those. So I should’ve had that one. They capitalized on their chances and there’s nothing much more I could do.”

Frank will continue her career at Minnesota State Mankato, where she’ll play college hockey but she was happy to lead White Bear Lake back to the tournament.

“Just getting to the tournament I think is pretty amazing. We haven’t gone since 2002 and just being here is great. I couldn’t ask for anything more.”

Meanwhile at the other end of the crease, King was happy to show the metro schools what northern hockey is all about.

“Here, we’re northern and people think we live in Antartica,” said King. “So it’s pretty nice to come to the cities and beat these teams and show what it’s like to play northern hockey.”

Brainerd will face Andover in the Class AA semifinal’s on Friday. Both teams made the tournament last year, but departed in the first round. Now, the two teams will be playing for the rights to go the Class AA championship.

“The experience of having been here last year helps you settle into the whole process,” said Ernster. “And also having played against them, there’s that sense of familiarity and anytime you’re familiar with an opponent, that just gives you a bit more level of comfort as well.”