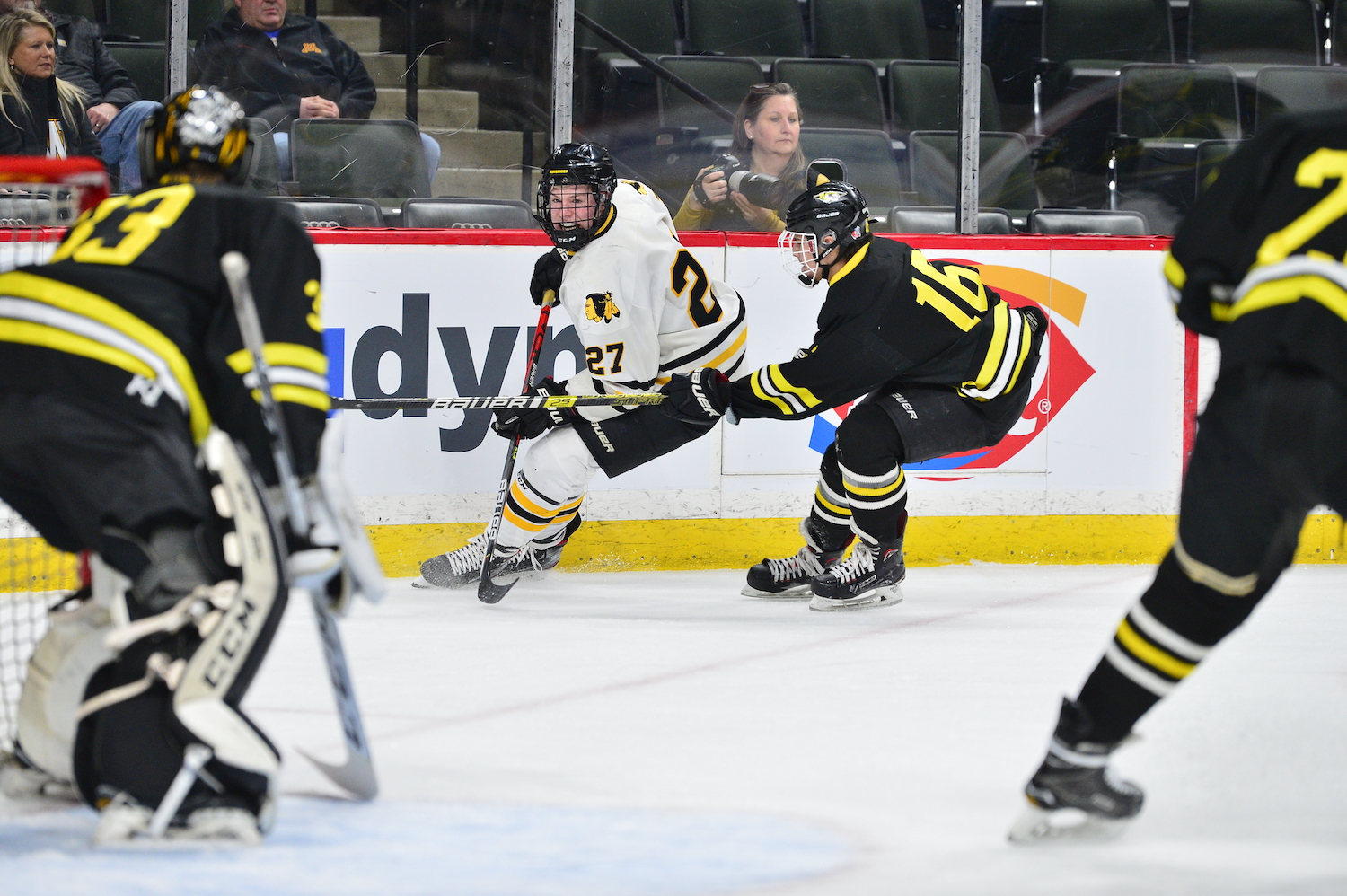 Warroad's Grant Slukynsky's focus was solely on the net in leading the Warriors to a 9-3 Class 1A state quarterfinal win over Hutchinson on Wednesday night at Xcel Energy Center. (Photo: Tim Kolehmainen / Breakdown Sports USA)

No, that honor would probably have to go to his senior teammate Grant Slukynsky, who scored a natural hat trick at the 6 minutes, 22 seconds mark of the first period to give the top-seeded Warriors (27-2-0) an early 3-0 lead on their way to a 9-3 victory over Hutchinson in the first Class 1A quarterfinal of the evening session at Xcel Energy Center.

“Couldn’t even dream of a better start than that,” Slukynsky said.

Slukynsky is no stranger to putting points on the scoresheet. He had a nine-point game in a 10-1 win at Detroit Lakes on Jan. 4, with four goals and five assists. Shaugabay threw a little joking sarcasm his teammate’s way during the postgame press conference.

“He scored three before two commercials,” Shaugabay said. “Why don’t you get nine while you’re at it, Grant?

The Mr. Hockey finalist Slukynsky nearly reached another record. His three goals and four assists for seven points just missed Mayasich’s record of most points in a single tournament game with eight.

“Usually not too many of his records are going to ever get touched,” said Warroad coach Jay Hardwick. “So, to do that is something special that I’ll never forget, he’ll never forget.

“It’s not every day that you witness something like that.” 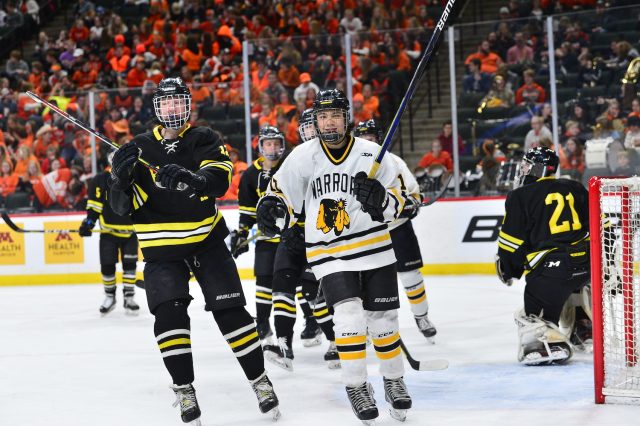 Warroad freshman Jayson Shaugabay is all smiles after one of his three goals in the Warriors Class 1A state quarterfinal win over Hutchinson Wednesday night at Xcel Energy Center. (Photo: Tim Kolehmainen / Breakdown Sports USA)

Shaugabay scored a pair of goals later in the first period before completing his hat trick with about 7:30 left in the game during the mostly-running-time third period. The freshman has 30 goals and 67 points this season.

Hutchinson got a pair of goals 1:02 apart from sophomore Brady Knorr to briefly stop the running time in the third period, but the deficit was still 8-3 at that point. Telecky said his team played uncharacteristic defense, especially early in the game. The Tigers (19-9-1) also used all three goaltenders during the game, Jacob Huls, Austin Hagen and Griffin Telecky.

It was a tough task to contain Warroad’s top line, specifically Slukynsky.

“That kid can shoot,” said Hutchinson coach Matt Telecky. “Even when we had guys close to him, he got rid of the puck so quick. He’s probably one of the fastest guys we’ve seen this year.”

Warroad is making its first trip to state since Brock Nelson led the squad to a third-place finish in 2010. Hardwick said he wasn’t happy with the two quick goals his team allowed in the third period, adding that he didn’t think the Warriors were very sharp, with the exception of Shaugabay and Slukynsky.

“We’ve got to be better on Friday for sure,” Hardwick said. “Because whoever we play is going to be a very good hockey team, and we’re going to have to bring our best effort.”

It was the tightest game of the day, a one-goal difference headed into the final period between 5-seed Delano and 4-seed Mahtomedi. The Zephyrs already hold the tournament record for most losses with 17, and No. 18 looked wasn’t out of the question.

But then the last five minutes of the game happened and Mahtomedi scored three times in a 3:32 span and added an empty netter for good measure to capture a comeback, 5-2 victory.

Mahtomedi put shots on net and hovered around the crease for much of the game, with only one goal to show for it through two periods.

“We’ve been throwing pucks at the crease for a month and with not as much to show for it as we’d like,” said Mahtomedi coach Jeff Poeschl.

With the minutes ticking away, junior Ethan Peterson made a solid pass through the neutral zone up to Adam Johnson to spring him for a breakaway. Johnson went five-hole to tie the game with 4:22 on the clock.

“Obviously the thought of scoring is going through your mind,” Johnson said. “But for the most part, you’re just like, ‘alright, get some momentum, at least. If it goes in, it goes in. If it doesn’t, there’s hopefully a rebound that a teammate could bang in.

“Fortunate enough that it found the net the first time.” 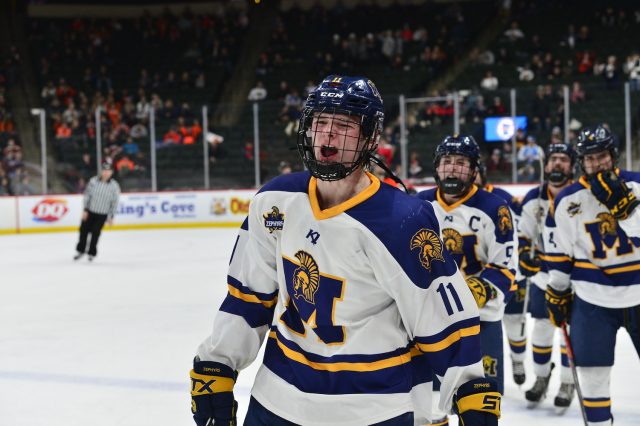 Mahtomedi’s JD Metz celebrates his third-period goal which turned out to be the game winner in the Zephyrs stunning come-from-behind 5-2 Class 1A state quarterfinal win over Delano on Wednesday night at Xcel Energy Center. (Photo: Tim Kolehmainen / Breakdown Sports USA)

One minute, 8 seconds later, the Zephyrs had the lead. Playmaker Nikolai Dulak passed over to JD Metz who finished the play with a backhand move in front of the net to go up 3-2 with a little more than three minutes remaining in regulation. Dulak put the game away with his 27th goal of the season with 1 minutes, 50 seconds left before the empty-netter with 7.7 ticks left.

Delano grabbed a 2-0 lead in the game with a power-play goal from Jesse Peterson and another tally from Gunnar Paulson less than two minutes later in the first period.

Delano (22-7-0) held the 2-1 lead despite getting outshot 15-5 in the second period alone. Mahtomedi’s power-play goal form Billy Buttermore to get on the board in the second period was not ideal for the Tigers, said coach Gerrit van Bergen, even if they didn’t feel out of the game and still had the lead.

Not only the victory but how the Zephyrs (21-8-0) won their quarterfinal is a huge momentum boost for the team, according to Poeschl.

“When you win in the manner that we were able to tonight, it gives us some momentum,” Poeschl said. “And we’re going to need it. Warroad is a heck of a hockey team. We’re going to need to be firing on all cylinders to compete with them and to put ourselves in a position to win.”