It’s a Race For the Carla Berg Cup 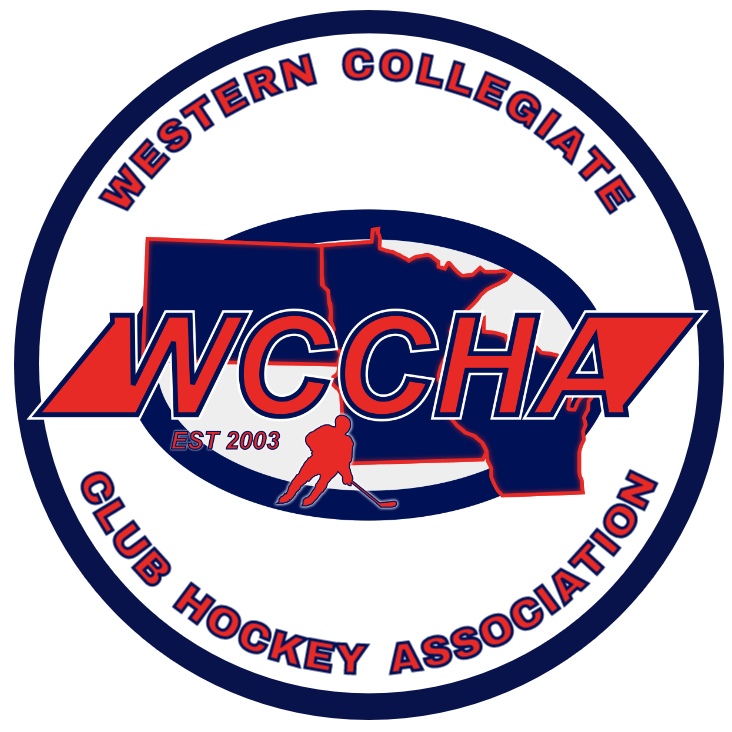 – by Ryan Donovan, Commissioner of the WCCHA

With the Winter Break underway, almost two-thirds of the WCCHA season has come and gone. There were surprises in both the Northwest and Southeast division, with the battle for tournament qualification as intense as ever and teams jockeying for position in the ACHA Central Region Rankings.

While all six automatic qualification spots are now claimed – three from each division – the race for the wildcard will likely come down to the final weekend of the WCCHA regular season. Regionally, the WCCHA is well represented in the Rankings, with Minnesota reaching a highest-ever ranking for a WCCHA team earlier this season when they rose to #5. At the break, five conference teams sit in the top 20, setting up a barnstorming finish upon a return to action in the coming weeks.

After a few opening weeks of non-conference action in September, Divisional play got underway the final weekend of September in a Northwest Division series between St. Cloud State and Minnesota-Duluth. In what would start an amazing run, the Huskies would sweep a tight series to match their division win total from 2017-2018 in only their first two games.

Over the course of first semester, the resurgent St. Cloud State team used a formula of superior goaltending and timely scoring to claim the Northwest Division title, completing their divisional schedule at 9-1-0. Not far behind, last year’s league champions Minnesota have mostly kept pace, booking a spot at this year’s tournament with 2 games remaining. North Dakota State – also enjoying a strong year despite significant offensive turnover – have earned the third and final automatic qualification spot.

In the Southeast Division, last year’s final wildcard qualifier St. Thomas has similarly surged up the standings, currently sitting in pole position with 2 important games remaining. The Tommies have impressed this season with a relentless and balanced attack with nine (!) players in the top ten in league scoring.  Minnesota State, currently second, have claimed a spot at the tournament after completing their divisional schedule at 4-3-1. The Division Title race will come down to the upcoming series between the Tommies and the third place Blugolds, ensuring a second “new” Division winner this season.

CHECK OUT THE FULL LIST OF CONFERENCE RESULTS, INCLUDING THE CURRENT DIVISIONAL STANDINGS AND KRACH RANKINGS HERE

With all of the Divisional qualification spots gone, much of the focus will be on the race for the Wildcard in the final weeks of the regular season. Four teams – the University of Wisconsin, University of North Dakota, University of Minnesota-Duluth and Bethel University – have a realistic shot at finishing in the qualification zone in the league-wide KRACH Rankings. Each team will have the chance to earn it on the ice, with some marquee series matchups including Bethel vs. Wisconsin, North Dakota vs. North Dakota State, and Minnesota-Duluth vs. UW-Eau Claire. The final league-wide KRACH Rankings, which take into account all WCCHA results, will be released Sunday, February 3 ahead of the tournament.

In greater ACHA play, WCCHA teams have plenty at stake in the race for Regionals. Minnesota currently leads the pack at #11, followed closely by #13 St. Thomas. Within striking distance as we enter 2019 are #16 St. Cloud State, #17 North Dakota State and #20 Minnesota State, with UW-Eau Claire just outside the top 20.

Serving as extra incentive this season is the location of Regionals, as the WCCHA will host the ACHA Central Regional Tournament at the Schwan Super Rink – also home to the WCCHA Tournament – March 1-3, 2019. With the winner of the WCCHA Tournament earning an autobid, this could finally be the season that two WCCHA teams enter the ACHA postseason with their eyes set on the ACHA National Championships in Dallas in late March.

For WCCHA players, Fall 2018 featured a slew of impressive performers. Leading the pack is St. Thomas’s Jack Sterne with 37 points, good for T-33 nationally. UST’s Jerame Schuetzle and Minnesota’s Dylan Ross are tied for the league lead in goals with 20 each, while UST’s Ben Papke leads all defensemen in the conference with 30 points.

In the net, North Dakota State’s Jordan Elliott heads the list of game winners with 9 this season. The two headed monster of Devon Dell and Jaxon Castor have been phenomenal for St. Cloud State, with the pair lining up 1-2 in both GAA and save percentage at 1.52/.958 and 2.00/.950, respectively.

In total, the first semester had its fair share of surprises and featured a number of standout team and individual performances. With the new year upon us, the final few weeks of the regular season could yet have some additional surprises in store as the race for the WCCHA Tournament reaches the boiling point. In just over a week, the first league teams return to non-conference action with the next bit of WCCHA play set to begin on January 22.

Then, come Sunday, February 3, the final two spots at the WCCHA Tournament will be officially awarded to the wildcard winners, with 2019 Carla Berg Cup Finals set for Feb. 8-10, 2019 at the Schwan Super Rink in Blaine, MN.