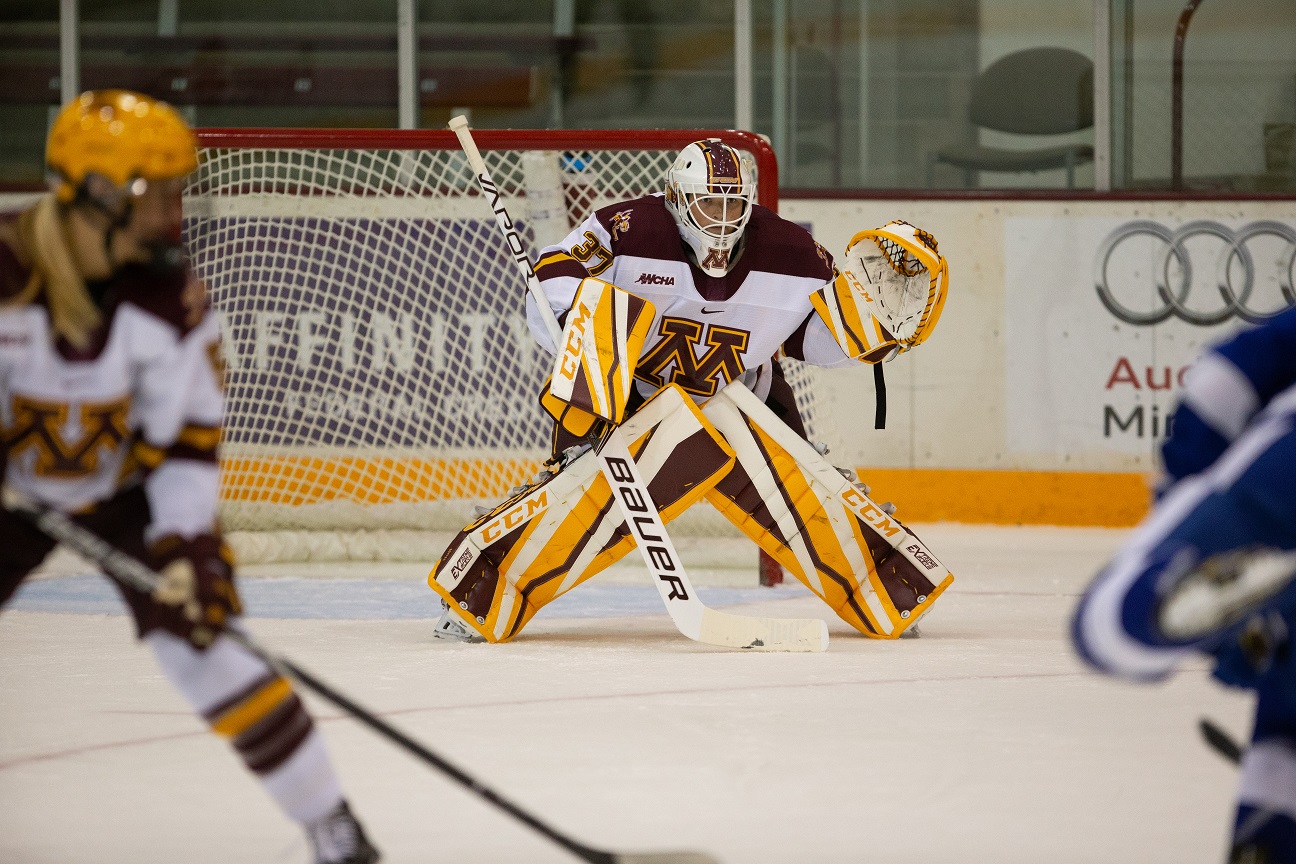 Key losses: Six seniors graduated, including goaltender Erin Deters (12 starts, .916 save percentage) and Alexis Joyce and Emma Teres, who ranked fourth and fifth on the team in scoring last year. 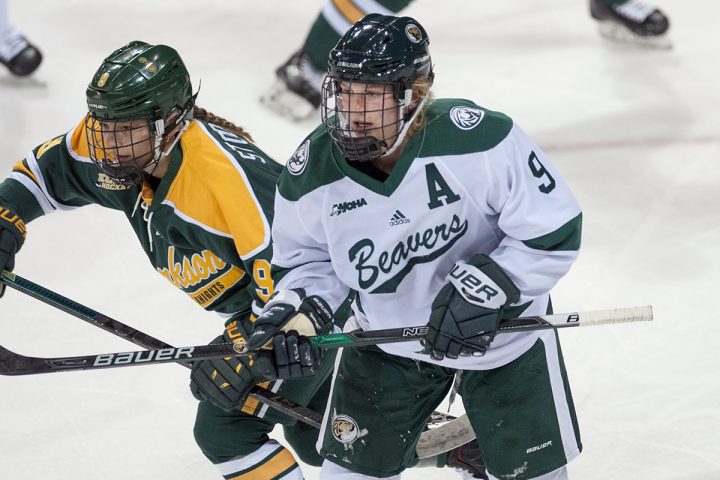 Key returnees: Haley Mack and Emily Bergland, who tied Terres for the team lead at 11 goals, return. As do veteran defenders Melissa Hunt and Briana Jorde. However, one of the biggest impacts is expected from sophomore Clair DeGeorge, who spent part of the summer playing with the U.S. Women’s U22 team, where she made her presence felt against Canada with the opening goal in the final game of the three-game series.

Top newcomers: Five freshmen step onto the team, including Lexi Cheveldayoff and Ellie Moser, who have both previously received camp invites from USA Hockey.

Outlook: It’s a young team and a program that continues to be on the verge of making noise in the conference. They’re easily the favorite among the bottom tier in the conference, which includes Minnesota State and St. Cloud. It’ll be an uphill battle for the Beavers, but there’s no doubt there’s talent on this team. The top of their lineup will be sturdy defensively and has offensive threats that could turn a game.

Key returnees: The big story isn’t the return of impact forwards like Grace Zumwinkle and Nicole Schammel, who led the team with 17 goals each last year. It’s the return of Olympic gold medalist Kelly Pannek, as well as Sarah and Amy Potomak who spent part of last season centralized with the Canadian national team. Those are three major offensive threats. In her junior season, Pannek led the nation in points.

Top newcomers: As ever, the Gopher rookies are impressive. Seven freshmen join the program, including Amy Potomak; Taylor Heise, who led the U.S. U22 team over the summer with two goals and three points; and Grace Ostertag and Catie Skaja, who have both spent time with the national team. Another big add is junior goaltender Sydney Scobee, who transferred from the University of Vermont where she faced plenty of stiff competition in Hockey East.

Outlook: It should surprise no one that the Gophers are one of the nation’s most formidable rosters. The defense might not be as strong as past years, but it should be solid. The only real question mark is in net. Sophomore Alex Gulstene grabbed 11 starts last year behind Peters, but she’ll be competing with Scobee, as well as senior Emma May and junior Serena D’Angelo.

Key returnees: Despite the losses, the team’s youth took the reins last season. The offensive firepower between Naomi Rogge, Ashton Bell, Jalyn Elmes, Sydney Brodt, and Ryleigh Houston is formidable. Also returning is gold medal-winning goaltender Maddie Rooney. She could steal games during her sophomore year. Now, she returns from a year of playing against the best competition in the world. 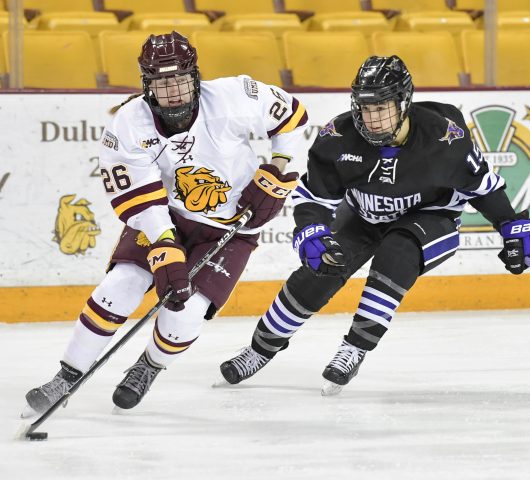 Top newcomers: Duluth is going to have a young squad with nine freshmen vying for roster spots. (They also have eight sophomores.) Among those rookies are four players who have won gold with Team USA at a U18 Women’s World Championship tournament: Lizi Norton, Gabbie Hughes, Anneke Linser, and Maggie Flaherty.

Outlook: The team is without the top-tier firepower of the Badgers or the Gophers, but don’t sleep on their young stars just because their last names aren’t Clark or Pannek. They’re good. With Rooney in net, this team absolutely has the ability to surpass expectations. They start the season ranked fourth in the WCHA by coaches, but it’s not hard to see them finishing higher than that. Though, the young blueline will be tested in a year where the WCHA carries as much offensive talent as any year in recent memory.

Outlook: Last season wasn’t great for the Mavericks, but Bidulka and Crosby held their own and, at times, kept the Mavericks competitive. Retaining both with a year more experience is a boon, as is getting freshman goaltender Abigail Levy, who will absolutely compete for time. But even with top performers returning, the Mavs only potted 57 goals in 34 games last year. They’re losing 18 goals in graduating seniors. Wins won’t come easy.

Key losses: Ohio State graduated six seniors. That group included Juliana Iafallo, whose 12 goals and 15 assists ranked fourth on the team in points. However, the biggest loss is undoubtedly the transfer of star goaltender Kassidy Sauve.

Key returnees: Top scoring threats Emma Maltais, Tatum Skaggs, and Maddy Field are all back in red. As is defenseman Jincy Dunne, whose star continues to rise. Despite the praise, she’s vastly underrated and should be a major player for the Buckeyes in her junior season.

Top newcomers: Of the seven freshmen, a handful have international experience and could make an immediate impact, including Finns Eve Savander and Sara Saekkinen, and Swiss Olympian Andrea Braendli. Defenseman Madison Bizal is another player to watch.

Outlook: Ohio State didn’t exactly surprise last year when it made a run to the Frozen Four, but, let’s say it surpassed rising expectations. Now, the expectations are high. The most lethal threats are back and Dunne anchors the team’s blueline. The biggest challenge will be replacing Sauve’s .938 save percentage posted in 32 games. Amanda Zeglen played well through seven games in net as a freshman, but Sauve was a next-level star who took on a major workload, playing 68 games over the last two seasons. 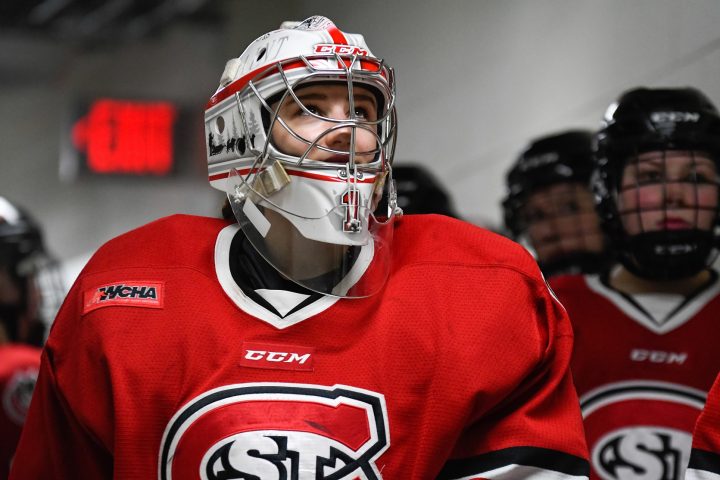 Key returnees: Goaltender Janine Alder split time last year between the Huskies and the Swiss Olympic team. Julia Tylke will be a leader among forwards this season, and the underappreciated talents of German forward Laura Kluge will also be crucial for the Huskies. Outstanding defender Abby Thiessen leads the blueline.

Outlook: They’re a step back from the conference’s top tier, but the Huskies will absolutely surprise some teams this year. Goaltender Emma Polusny showed she can hang with the best netminders in the conference last year, posting a .934 save percentage in 20 games. That earned her a trip to the USA Hockey National Team Evaluation Camp last month. Between her and Alder, they can steal games with either of two netminders. If those two can hold back the tide, the top line can score and St. Cloud can log some wins.

Key losses: The Badgers are down three seniors from last year. That includes Claudia Kepler who led the team with 22 goals last year and ranked second overall in the WCHA. Veteran leader Baylee Wellhausen also graduated.

Key returnees: The WCHA regular season champions come back with starting goaltender Kirsten Campbell, and top offensive threats Abby Roque and Presley Norby. They’re also getting Olympian Emily Clark and Annie Pankowski, who was a redshirt last year while she centralized with the U.S. National Team.

Top newcomers: The standout among the team’s five freshmen is Sophie Shirley, who spent last season centralized with the Canadian National Team. It’s no stretch to think she’ll make an immediate impact in the collegiate ranks.

Outlook: All this team did last year was turn opposing defenses inside out. Between Roque, Norby, Sam Cogan, Sophie Shaver, and Alexis Mauermann, they put up 53 goals. (That’s more than the entire St. Cloud roster and just four fewer than Minnesota State.) Add in the return of Clark and Pankowski with rookie Shirley and this Badger team could light up opponents even more than it did last year when the team averaged more than three goals per game.