Gopher F Hannah Brandt expected to repeat as WCHA Player of the year. 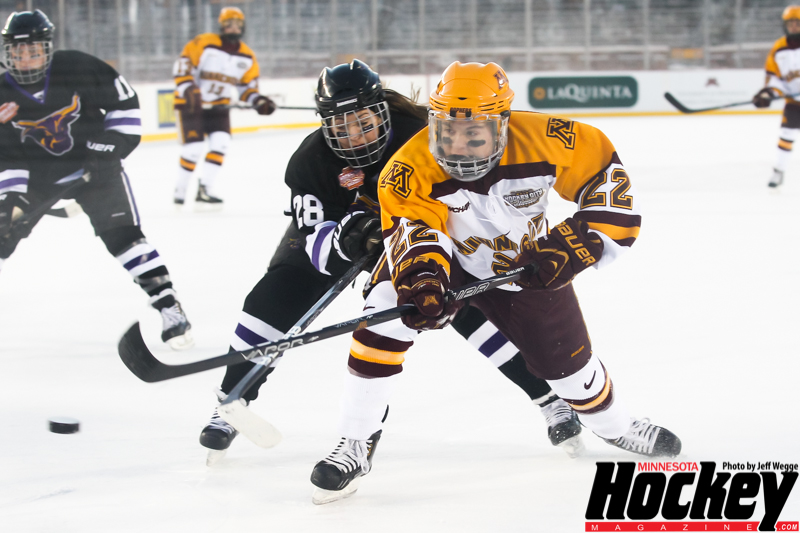 Minnesota’s Hannah Brandt releases a shot as Minnesota State’s Danielle Scholzen leans in to defend in the Gophers’ 4-0 win over the Mavericks in the Hockey City Classic at TCF Bank Stadium in Minneapolis on Friday, Jan. 17, 2014. (MHM Photo / Jeff Wegge)

Gopher F Hannah Brandt expected to repeat as WCHA Player of the year.

On the heels of Monday’s announcement that the University of Minnesota women’s hockey team had regained its position atop U.S. College Hockey Online’s national rankings, the WCHA on Tuesday released its 2014-15 WCHA Head Coaches’ Preseason Poll.

As expected, the two-time defending WCHA regular season champion Gophers are predicted to win a third straight regular season conference title playing in a league which has 14 Division I women’s national championships in its 15 years of existence to its credit.

Additionally, Minnesota junior forward Hannah Brandt, the league’s reigning WCHA Player of the Year, was the unanimous preseason selection by the coaches to retain her crown in 2014-15. Wisconsin freshman forward Annie Pankowski is the head coaches’ preseason choice as WCHA Rookie of the Year.

Minnesota-Duluth (34), tied with Quinnipiac at No. 10 in the USCHO preseason poll, nipped North Dakota (33) by a point for the third spot while Ohio State claimed the fifth position.

Minnesota has advanced to the NCAA championship game in each of the last three seasons, winning titles in 2012 and 2013 and falling in the championship game to Clarkson 5-4 last season. The Gophers have also won the WCHA FINAL FACE-OFF playoff championship three times in that span.