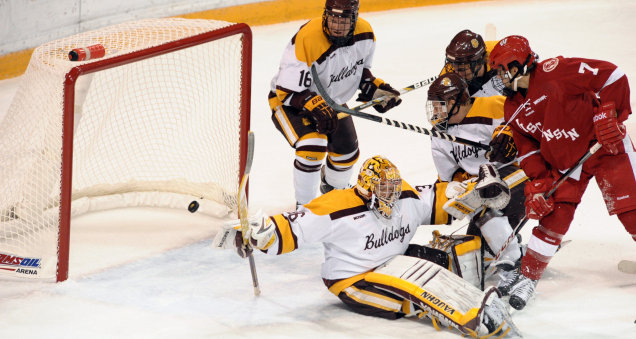 Eagan’s Tyler Barnes scored what turned out to be the game winner at 15:11 of the first period and Mark Zengerle added a goal and an assist as the Badgers (1-2-0, 1-0-0 WCHA) earned their first win of the season over the Bulldogs (2-3-0, 0-1-0 WCHA) in Duluth. Sophomore goaltender Joel Rumpel shut out UMD on 29 shots for the victory. 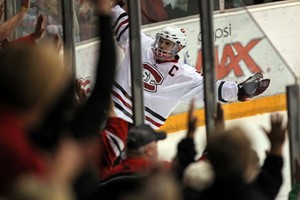 Hermantown’s Drew LeBlanc had a goal and three assists and Ben Hanowski (Little Falls) scored twice leading the Huskies (3-2-0, 1-1-0 WCHA) over the Mavericks (2-1-2, 0-1-0 WCHA) at National Hockey Center.  Nic Dowd and Kalle Kossila each added a goal and an assist and Ryan Faragher made 24 saves for SCSU. 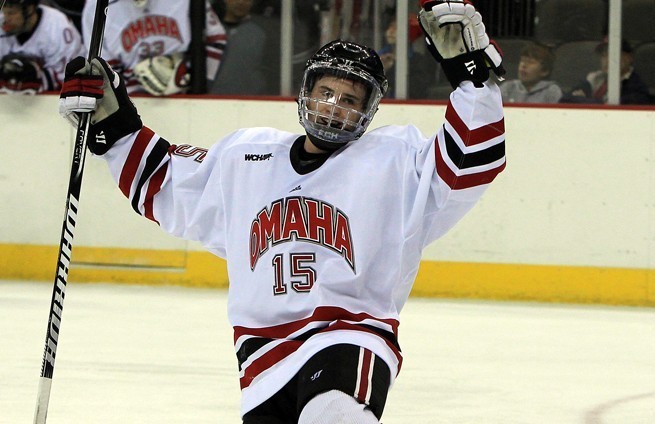 Josh Archibald had a goal and an assist for UNO in its 3-3 tie with Bemidji State on Friday. (Photo: University of Nebraska Omaha Athletics)

A goal and an assist by Brainerd’s Josh Archibaldsparked the Mavericks (2-2-1, 0-0-1 WCHA) to a 3-1 second-period lead, but the Beavers (1-1-1, 0-0-1 WCHA) drew even before the second intermission on goals by Aaron McLeod and Markus Gerbrandt to earn a tie at Omaha’s CenturyLink Center.  Reigning WCHA Defensive Player of the Week, Andrew Walsh, made 39 saves for BSU. 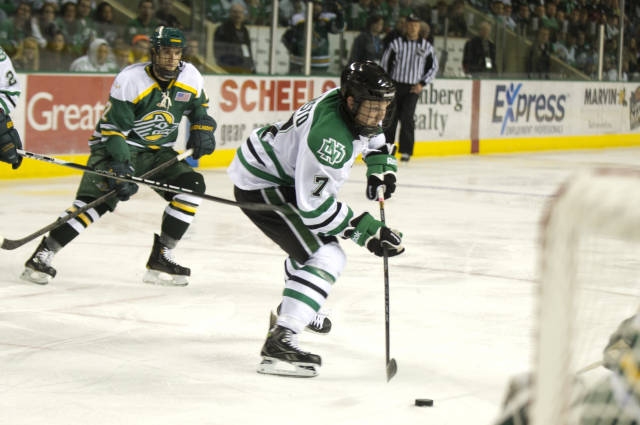 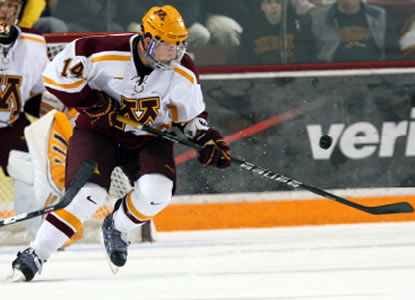 Tom Serratore got the Gophers on the board Friday. (Photo: (WCHA.com)

Second-period goals by Tom Serratore and Nick Bjugstad allwed the Gophers to rally from a two-goal deficit to tie the U.S. Under-18’s at Mariucci Arena. Future Gopher Vinni Lettieri of Minnetonka, on loan from the USHL‘s Lincoln Stars as an injury replacement, scored for the  U.S. Under-18’s and Christan Horn notched an assist in his Gopher debut. Minnesota goaltender Michael Shibroswki  made 27 saves including the final 20 he faced.