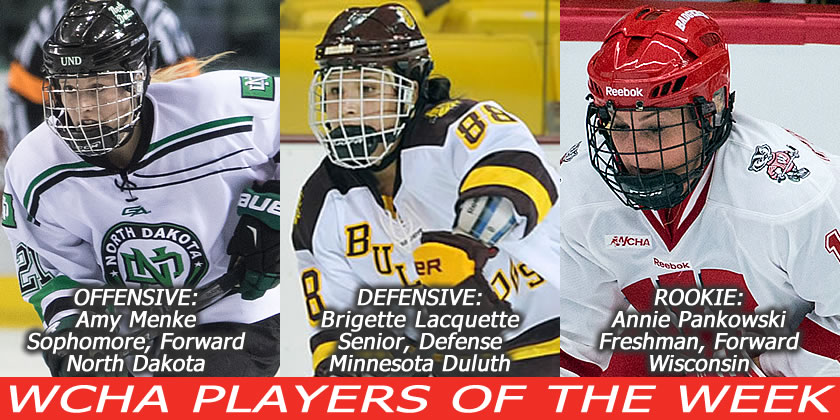 Menke, a sophomore from Shakopee, Minn., led North Dakota with four points during a weekend sweep of Bemidji State. She tallied three goals and one assist, including her team-leading third game-winning goal of the season in Saturday’s 4-1 victory. After the Beavers opened the second period of Saturday’s game with a 1-0 lead, Menke scored twice in the period, including a shorthanded goal, to put UND on top for good. She then followed that performance with a goal and an assist during Sunday’s 5-1 triumph. Menke finished the weekend with a +4 rating and currently leads UND with nine goals this season.

Lacquette had a five-point weekend, including a hat trick of power-play goals last Friday night, to help No. 6 Minnesota Duluth sweep a WCHA road series at Minnesota State. The senior from Mallard, Manitoba scored in each period Friday night to tie a UMD record for most power-play goals in a game, while also adding an assist for a four-point night. She also excelled on the defensive side of the ice during a pair of UMD shutouts, anchoring a penalty-kill unit that kept the Mavericks scoreless in six power-play attempts. Currently training with Team Canada until this Friday, Lacquette ranks eighth nationally with five power-play goals and eighth among scoring defenseman with 19 points (6g, 13a).

Pankowski recorded her second career hat trick to give No. 4 Wisconsin a 4-0 victory over No. 7 Clarkson on Sunday. The freshman from Laguna Hills, Calif. broke a scoreless tie against the defending national champions with two second-period goals, before notching a third-period tally that iced the 350th career victory for Badgers’ head coach Mark Johnson. Pankowski finished the weekend with a +3 rating and now has 12 goals, 16 assists and 28 points on the season. She is tied for second nationally among freshmen with an average of 1.12 points per game.