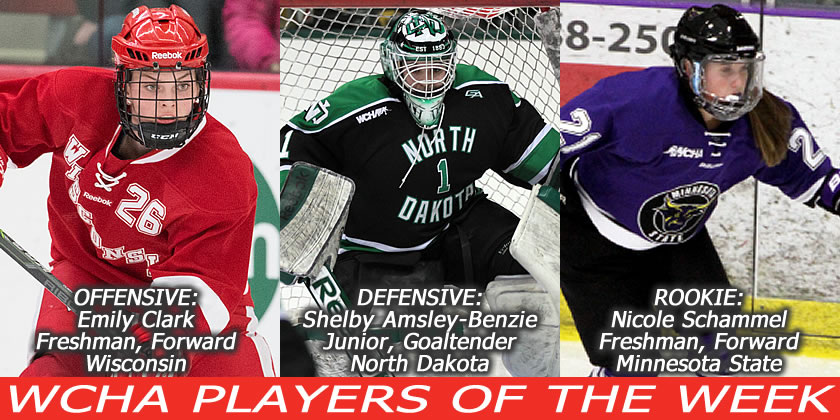 Clark, a freshman from Saskatoon, Saskatchewan, had a four-point weekend to pace No. 3 Wisconsin to a WCHA road series sweep at Minnesota State. The rookie played a role in all three Badger goals during Friday’s 3-0 victory, scoring twice while assisting on the game-winning score. Clark also had an assist on Jenny Ryan‘s game-tying goal Saturday, sparking Wisconsin’s rally to a 5-1 triumph. She finished the weekend with a +4 rating and nine shots on goal.

Amsley-Benzie continued her run of stellar play, backstopping North Dakota to a five-point weekend at No. 6 Minnesota Duluth. The junior from Warroad, Minn. recorded her fourth shutout of the season – third against a nationally-ranked opponent – when she stopped all 30 shots faced Friday in a 1-0 victory. She then followed up her shutout performance with a 25-save effort Saturday, helping UND to a 2-2 tie and shootout victory. North Dakota’s netminder helped her team’s penalty kill go a perfect 6-for-6 on the weekend, stopping 10 shots while short-handed. Amsley-Benzie currently leads the nation with a .949 save percentage. Since Jan. 1, she tops the country with both a .971 save percentage and 0.71 goals against average.

Schammel recorded her first career hat trick and added an assist to lead Minnesota State to a 5-1, Monday night victory over St. Cloud State – the Mavericks’ first WCHA win this season. The freshman from Red Wing, Minn. scored a pair of even-strength goals – including the game-winner – in the first period, before adding a power-play strike and an assist in the second. She becomes the first Maverick to record a hat trick since senior teammate Kathleen Rogan on Jan. 2, 2013, and the first Minnesota State freshman with three goals in a game since Rogan accomplished the feat Oct. 22, 2010. Schammel ranks fourth among WCHA freshman with 17 points in 27 games this season (7 goals, 10 assists).