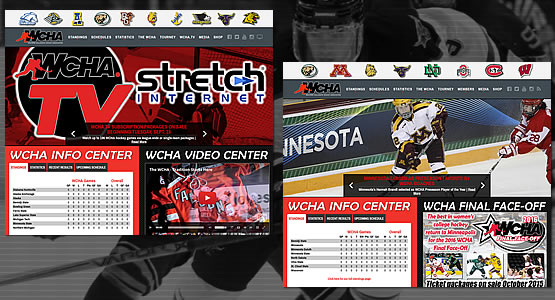 The Western Collegiate Hockey Association (WCHA) announced the launch of the conference’s new –look website on Tuesday, Sept. 15 for both its men’s and women’s pages. Wcha.com’s redesign is the result of a partnership between the league office and website provider 867 Studios.

“We wanted to provide WCHA fans with an easily accessible and visually striking showcase of the league’s tremendous student-athletes, coaches and institutions,” said Men’s Commissioner Bill Robertson and Women’s Commissioner Aaron Kemp in a joint statement released by the league. “With its simplified layout, content and continued statistical integration with collegehockeystats.net, we feel the new wcha.com will be a go-to resource for our fans.”

In addition to its responsive design, allowing for scalability across devices, the new wcha.com’s large, rotating displays near the top of the home page and team pages magnify current news and stories, while content is organized in a simplified manner.

The site’s statistical platform, which is integrated with collegehockeystats.net and contains some of the most expansive analysis available, is also responsive – with more enhancements planned as the season unfolds.