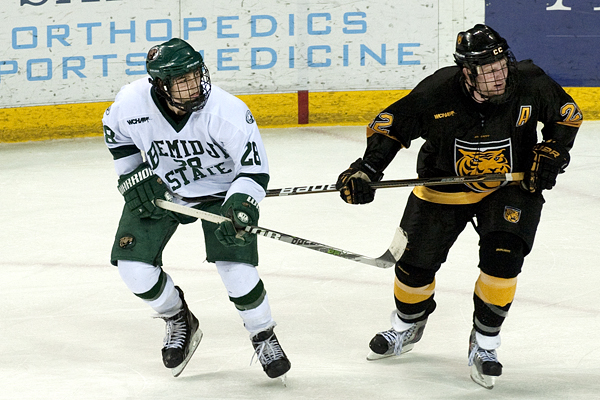 Jordan George’s goal last Friday night was not only the first of the season for the senior, it also stood as the 50th of his career … He is the 25th player in Beaver hockey history to net 50 goals and the fourth in BSU’s Division 1-era (since 1999-2000) … George is the only current NCAA Division I men’s hockey player to have scored 50 collegiate goals … The Beavers now return home to Sanford Center for the first time since Oct. 20 to host Michigan Tech Nov. 16-17 … The Beavers own a 5-2-1 advantage in the all-time series with the Huskies, which includes a perfect 4-0-0 mark when playing MTU in Bemidji.

The Gophers’ power-play is the third most successful in the country at .286 (12-for-42) – a stat that also a leads the WCHA … The Gophers have now tallied nine power-play goals in the last four games on 22 opportunities for a whopping 41 percent success rate but the Gophers have scored just three even-strength goals during that span … 12 of Minnesota’s 31 overall goals–or 39 percent–have come on the power play. Only Minnesota Duluth’s 53 percent (10 of 19) ranks higher … The Gophers rank second in the WCHA and eighth in the nation in scoring defense with just 18 goals against in nine games (2.00) – Denver leads the league at 1.88 goals against per game … Goaltender Adam Wilcox’s 1.58 goals-against average leads the WCHA and ranks fifth overall in the nation … the rookie’s .786 winning percentage (5-1-1 record) also is the best in the WCHA and the eighth highest percentage in the NCAA this season … Minnesota continues the season this weekend, hosting Wisconsin for a two-game WCHA series at Mariucci Arena … the Gophers are 155-86-20 all-time against the Badgers and 90-27-7 at home.

The Bulldogs, who are mired in a five-game winless funk at the moment (0-4-1), will be seeking to notch their first WCHA win of the young 2012-13 season in Grand Forks … Senior right winger Mike Seidel, who has picked up at least one point in seven of UMD’s eight games to date (the exception was a 2-0 shutout loss to Wisconsin on Oct. 26), leads the Bulldogs in scoring with five goals and four assists … Four of his five goals this season have come on the power-play and those four scores are unsurpassed by any NCAA skater at the moment … Rookie center Tony Cameranesi figured in on all four UMD goals in Omaha, scoring once and adding three assists to improve his 2012-13 offensive harvest to seven points … That puts the Plymouth, Minn., product and Toronto Maple Leaf (NHL) draftee third among all WCHA newcomers in scoring … The Bulldogs are the nation’s most penalized team at the moment, averaging 19 minutes of infraction time per outing.

Sophomore forward Jean-Paul Lafontaine, who has not missed a game in his two-year MSU career, upped his season totals to 3-5=8 with his two-goal, two-assist output in MSU’s two games vs. third-rated Denver last weekend … A member of the 2011-12 WCHA All-Rookie Team, Lafontaine has moved into second place on MSU’s scoring charts, he owns 16-20=36 in 48 career games and is currently riding a four-game point scoring streak (3-4=7) … Sophomore forward Matt Leitner (1-9=10), who led the Mavericks in scoring last year, stands atop MSU scoring charts this year and also leads the Mavericks in assists … In the last three consecutive weeks, Minnesota State has faced three ranked opponents in #15 St. Cloud State, #2 Minnesota and #3 Denver … The Mavericks are outshooting opponents 346-272 in 2012-13.

Junior Nic Dowd and senior Drew LeBlanc ranked second among Division 1 players this season with 14 points apiece … Dowd leads the Huskies with six goals this season and he also has eight helpers in 2012-13 … LeBlanc charted two goals and one assist in the SCSU win over UND to up his season totals to five goals and nine assists … LeBlanc now has 111 career points at SCSU ranking him 17th all-time at SCSU along with former Husky standouts Fred Knipscheer and Tony Gruba … Sophomore forward Joe Rehkamp broke into the SCSU scoring column on Nov. 10 with a career game-high three assists … The Huskies are outscoring their opponents 36-25 in 2012-13, and they are also out­shooting their opponents 304-277 after the first 10 games of the year …  SCSU freshman Jonny Brodzinski got back on the scoresheet with his second goal of the 2012-13 season on Nov. 10 against UND … Brodzinski now has two goals and two assists for the Huskies in his first year at SCSU.

Beyond the Border Scorers

Archie Skalbeck – Colorado College (junior, forward, Hopkins, Minn.) – Skalbeck had two assists in each game of a CC’s sweep of Bemidji State last weekend including the primary assist both game winners. With his goal against Wisconsin on Nov. 3, Skalbeck now has had a hand in three consecutive game-winning goals for the Tigers.

Sean Ambrosie – Connecticut (senior, foward, Moorhead, Minn.) – Ambrosie scored the game-winning goal at the start of the third period and assisted on the game-tying goal on the power play to lead the Huskies to a 3-1 win at Merrimack on Saturday.

Josh Archibald – Nebraska Omaha (sophomore, forward, Brainerd, MInn.) – Archibald’s primary assist on Saturday’s game-winning goal was one of his three points (1-2–3) in the series for UNO. His nine points (6-3–9) overall have him tied for third on the team in scoring.

Isaac Kohls – Niagara (sophomore, forward, Forest Lake, Minn.) – Kohls led the offense for the Niagara men’s hockey team with a four-point weekend in a sweep of the Army Black Knights to remain undefeated in AHA play.  Kohls helped the Purple Eagles extend their unbeaten streak to seven games with a goal and three assists in two contests.

Heading to the polls …

Minnesota and St. Cloud State are the only Minnesota teams ranked this week in the USCHO.com Division I Men’s Poll as the Gophers drop one spot to N0. 3 in swapping positions with Denver who is second only to Boston College which received all 50 first-place votes this week. St. Cloud State maintains its hold on No. 15 while  North Dakota (6), Colorado College (14) and Nebraska Omaha (18) are tho other ranked WCHA teams. Last week’s No. 20, Minnesota-Duluth, dropped out of this week’s poll.

University of Minnesota goaltender Adam Wilcox, who allowed just two goals in a conference road victory and overtime tie at Alaska Anchorage last weekend, has been named the Red Baron® WCHA Rookie of the Week for Nov. 13.

A 6-0, 186-pound freshman from South St. Paul, Minn., and a NHL draftee of Tampa Bay, Wilcox crafted his second shutout of the season last Friday (Nov. 9) in a 2-0 Minnesota victory with 14 saves. He then got the starting nod against last Saturday (Nov. 10), this time coming up with 21 saves as the Gophers and Seawolves played to a 2-2 overtime tie. One of the two goals he allowed came on a power-play.

Wilcox’s 1.58 goals-against average over 456 minutes of action ranks first overall among WCHA goaltenders, his 5-1-1 record and .786 winning percentage is second best overall, and his .924 save percentage ranks fourth.