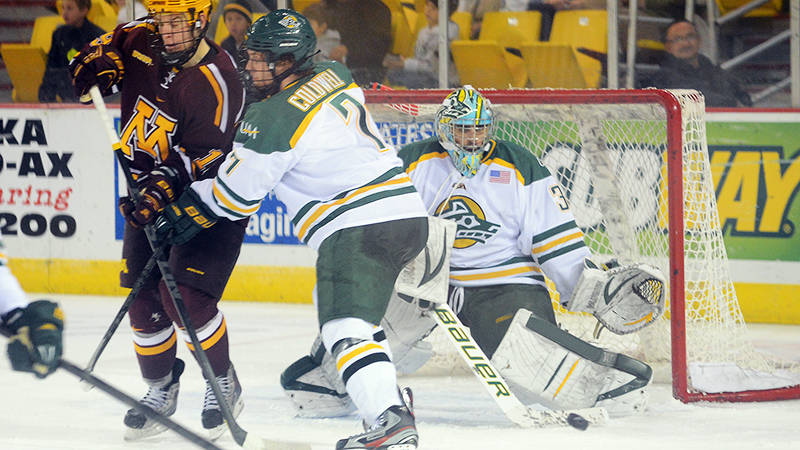 
The Pioneers chased MSU starting goaltender Phil Cook in building a 3-0 lead in the first 23:28 on Friday night in Mankato. But goals by Jean-Paul Lafontaine and Eriah Hayes late in the second period closed the gap to one heading into the third. The Mavericks could not bury the equalizer, however, and Daniel Doremus score the eventual game winner for Denver with 6:17 remaining in the third. Lafontaine’s second goal of the game at 18:09 with the MSU net empty restored the one-goal margin, but that is as close as the Mavericks would come

Denver’s Chris Knowlton scored twice on Saturday, including the game winner with 3:12 to play and the Pioneers left Mankato four points richer with a series sweep. For the second straight night, Minnesota State dug itself a hole and trailed 2-0 midway through the first on goals by Knowlton and Doremus. But Hayes trimmed the deficit to one at 15:07 of the opening period and Josh Nelson tied it 2:42 into the third.


North Dakota goaltender Clarke Saunders made 32 saves to shut out St. Cloud State 3-0 on Friday night in St. Cloud. UND’s Brendan O’Donnell scored the only goal his team would need just 48 seconds into the contest while Carter Rowney and Mark MacMillan added goals in the second and third periods, respectively. 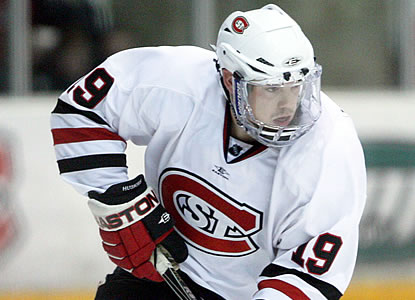 Drew LeBlanc scored twice to lead the Huskies over North Dakota on Saturday to split the series. (Photo: WCHA.com)

After falling behind North Dakota in the opening period for the second straight night, the Huskies bounced back this time for a resounding 5-2 win on Saturday night. Drew LeBlanc scored twice, including the game winner, and added an assist while SCSU goalie Ryan Faragher made 22 saves for the win. UND’s Drake Caggiula got UND on the board first at 11:18 of the first but Jonny Brodzinski answered with his second goal of the season just 1:01 later. LeBlanc scored twice in the first 12:23 of the second period, the first courtesy of one of Joe Rehkamp‘s three assists on the night, to give the Huskies the lead for good.

Rylan Schwartz‘s goal at 16:19 of the second period, one of his two on the night, proved to be the difference in Colorado College’s one-goal win over Bemidji State on Friday night in Colorado Springs. The teams traded goals in a 2-2 first period as the Beavers erased two CC leads on goals by Jordan George and Danny Mattson, the first goals of the season for each. Archie Skalbeck assisted on both of Schwartz’s goals.

Behind two goals and two assists by William Rapuzzi, the Tigers completed a series sweep of BSU on Saturday. Both of Rapuzzi’s goals–including the game winner at 5:17–came in a third period which began with CC clinging to a 3-2 lead. Markus Gerbrandt scored to pull the Beavers within two at 18:32, but that’s as close as BSU would get. Cory Ward and Aaron McLeod also scored for Bemidji State while CC’s Skalbeck (two assists) and Schwartz (three assists) capped off big weekends on Saturday.


Kyle Rau scored twice while Nick Bjugstad and Ben Marshall each scored a goal for Minnesota on Friday night in Anchorage. Minnesota continued its trend of reliance on the power play for its offense as the Gophers scored four times with the man advantage and Adam Wilcox stopped 14 Seawolves’ shots to post the shutout.

Erik Haula scored Minnesota’s only even-strength goal of the series at 13:31 of the third period on Saturday allowing the Gophers to escape Anchorage with a tie and three of four points on the weekend. The Gophers and Seawolves traded first-period goals and they remained knotted at 1-1 at the second intermission. But Alex Gellert gave UAA its only lead of the series at 5:38 of the third setting the stage for Haula’s big goal.

Mike Seidel and Tony Cameranisi each scored late in the first period to pull the Bulldogs even with UNO at 2-2 after an early two-goal deficit. But the scoring dried up from there until Michael Young‘s goal at 12:12 of the third period lifted the Mavericks over UMD on Saturday night in Omaha. Josh Archibald and Ryan Walters also scored for UNO while Wade Bergman had two assists for the Bulldogs.

Dominic Zombo scored twice and Walters added a goal and an assist as the Mavericks completed a sweep of Minnesota-Duluth on Sunday afternoon. UNO goaltender John Faulkner made 31 saves in raising his record to 6-0-1 overall. Seidel and Joe Basaraba scored first period goals for the Bulldogs as the teams skated to a 2-2 tie after one period as they had the night before. But the Mavericks scored twice in the final 1:14 of the second period, including Zombo’s second of the game with 9.1 seconds left which would hold up as the game winner.