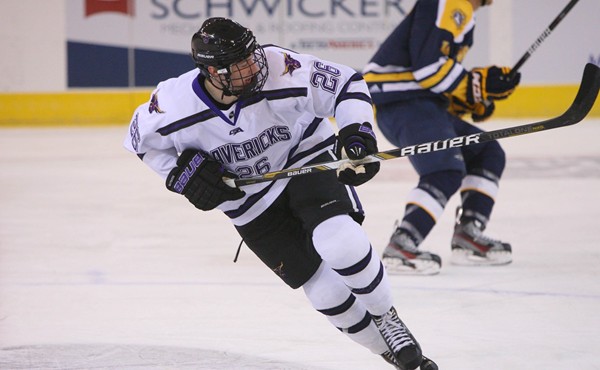 
Minnesota State led in each of the first two periods on Friday on goals by Zach Palmquist and Teddy Blueger but the No. 2 Gophers battled back to tie each time on power-play goals by Travis Boyd and Nate Schmidt. Zach Budish added a third PP goal at 5:40 of the final period and a great effort by Mavericks goaltender Phil Cook (29 saves) went for naught in a 3-2 Minnesota win. Gopher goalie Adam Wilcox earned his fourth win of the season with 23 saves.

The teams traveled to Mankato for Saturday’s rematch and Dylan Margonari provided the evening’s heroics. The MSU freshman forward’s goal at 16:19 of the final period gave the Mavericks a 4-3 lead on their way to a 5-3 win. Minnesota State’s goal scoring was spread among five players with 10 registering MSU’s 11 total points. Cook was strong again with 25 saves to pick up his third win of the year while Wilcox made 30 saves in his first loss. Erik Haula had a goal and two assist while Nate Condon added a goal and an assist for Minnesota.


St. Cloud State forwards Nic Dowd and Kalle Kossila continued their hot starts and Ryan Faragher made 28 saves to shut out the nation’s highest scoring offense on Friday night in Denver. Dowd scored his fifth and sixth goals of the year and Kosilla his fourth as No. 18 SCSU handed No. 3 Denver its first loss of the season.

On a night in which Wisconsin honored legendary CC and UW coach, Bob Johnson, with a pregame ceremony dedicating the Kohl Center ice to “Badger Bob’s” memory, the Tigers spoiled the party with a 5-4 victory on an Alexander Krushelnyski goal just 25 second into overtime. Friday night’s winner was set up, ironically, by Edina’s Charlie Taft whose father, John Taft, played for Johnson and the Badgers in the 1970’s. CC’s Eamonn McDermott contributed 3 assists to the cause. 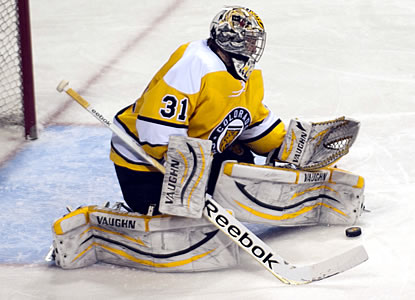 Plymouth’s Joe Howe shut out Wisconsin on Saturday to complete a sweep of the Badgers in Madison. (Photo: WCHA.com)

Former Hopkins forward Archie Skalbeck‘s fourth goal of the season at 1:58 of the second period held up as the game winner on Saturday night when Plymouth’s Joe Howe shut out the Badgers on 33 saves to raise his record to 2-0-0 on the season. Krushelnyski scored for the second straight night and McDermott added his fourth assist of the series. To make matters worse for the Badgers, star forward Mark Zengerle was lost in the second period to what UW coach Mike Eaves confirmed was a broken finger.


Nebraska Omaha’s Zahn Raubenheimer scored twice, including the dramatic winning goal at 18:50 of the third period, to lead the Mavericks over the Huskies in Houghton, Mich. on Friday night. After Raubenheimer put UNO on the board at 5:38 of the second, MTU’s Tanner Kero tied just under 10 minutes later setting up Raubenheimer’s late-game heroics.

Raubenheimer haunted Michigan Tech again on Saturday scoring two more goals, including  his second consecutive game winner, as the Mavericks completed the road sweep of MTU. Brainerd’s Josh Archibald also scored twice and Rosemount’s Ryan Walters had a goal and a pair of assists for Nebraska Omaha. UNO goaltender John Faulkner followed up Friday night’s 21-save performance with 24 more to raise his record to 4-0-1.


Edina’s Connor Gaarder scored a hat trick and Rocco Grimaldi added a goal and an assist to lead North Dakota to a non-conference win over Boston University in Grand Forks on Friday night. Clarke Saunders made 20 saves in the victory for UND.

The Terriers returned the favor on Saturday by an identical 4-2 score to earn a split on the road. BU’s scoring came from four different players including Danny O’Regan who added an assist. Eden Prairie’s Danny Kristo and Stephane Pattyn scored UND’s goals and goalie Zane Gothberg of Thief River Falls made 29 saves in the loss.