No. 3 – University of Minnesota Duluth Bulldogs 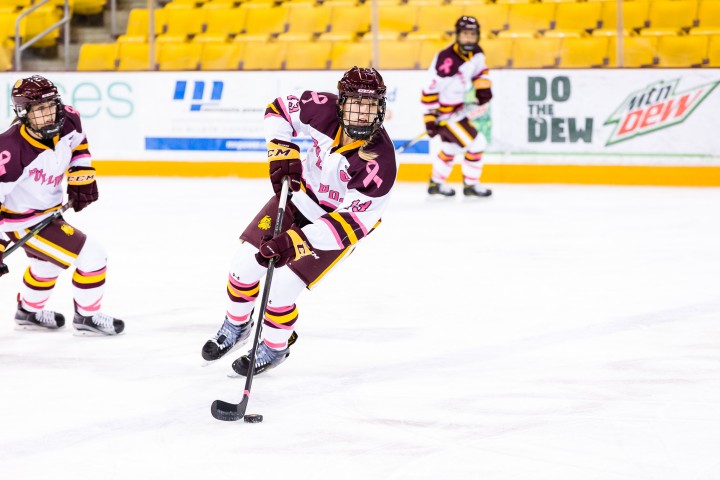 The Bulldogs have done nothing but prove they belong among the best in the nation at every turn. In both the USCHO and USA Today/USA Hockey Magazine polls they finished above the Gophers. They’ve struggled against lower teams more than Minnesota has, but they’ve also consistently stymied top teams.

One reason for their success has been the outstanding play of goaltender Maddie Rooney.  With a .939 save percentage, the sophomore is one of the conference’s biggest surprises. She played 19 games as a freshman, posting an .899 save percentage. Her arrival as one of the conference’s best goaltenders wasn’t wholly expected but helped provide the foundation for Duluth’s success.

They’ve also leaned on the versatility of talented upperclassmen led by defenseman Sidney Morin (7-13-20), captain Ashleigh Brykaliuk (16-23-39), and forward Lara Stalder (19-28-47), who has moved to the blue line in key games this season. They’ve also benefited from the surprising emergence of senior Katherine McGovern (17-16-33), as well as how quickly freshmen Sydney Brodt (7-13-20) and Jalyn Elmes (2-7-9) adapted to the college game.

That’s a lot of names and as it indicates, their depth is formidable.

With a couple years outside the top teams in the nation, the Bulldogs are back and could easily emerge as the WCHA’s top team, even though their path to a championship likely runs through both the Gophers and the Badgers.

Lara Stalder, Sr., F — Stalder is having a standout season. She’s a huge part of the team’s success. She’s been a go-to for coach Crowell in all situations. She has the ability to adapt to the team’s needs and to generate offense in droves alongside Brykaliuk.

No. 3 – University of Minnesota Duluth Bulldogs