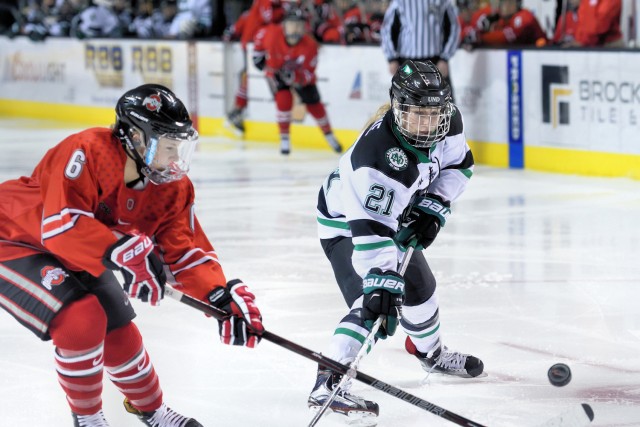 North Dakota is easily a step above the bottom four, but they’re also a step below the top three. For a short period early in the year, they ranked in the top 10 nationally. Things looked promising after they worked the Gophers to two ties in their first match-ups of the year. But those ties were followed by a split with Syracuse, a tie and a loss to Ohio State, a loss to Lindenwood, and sweeps at the hands of the Badgers, Gophers, and Bulldogs.

While that sounds awfully gloomy, they have a formidable defense, led by national team player Halli Krzyzaniak and Gracen Hirschy. Freshman Ryleigh Houston has been a revelation up front, leading the team in points and assists. Additionally, senior goaltender Lexie Shaw has been a big part of their strong team defense with a .926 save percentage and a 1.68 goals-against average. North Dakota will open the playoffs with a repeat of their season-closing series against Ohio State, which the teams split.

Amy Menke, Sr., F — After posting 40 points last year, she has just 22 this season. That’s the lowest point per game pace since her freshmen year. But, despite the box score being less impressive, Menke isn’t a changed player. She’s more than capable of leading the team to a win. No one should be surprised if she plays the hero in a game or two.