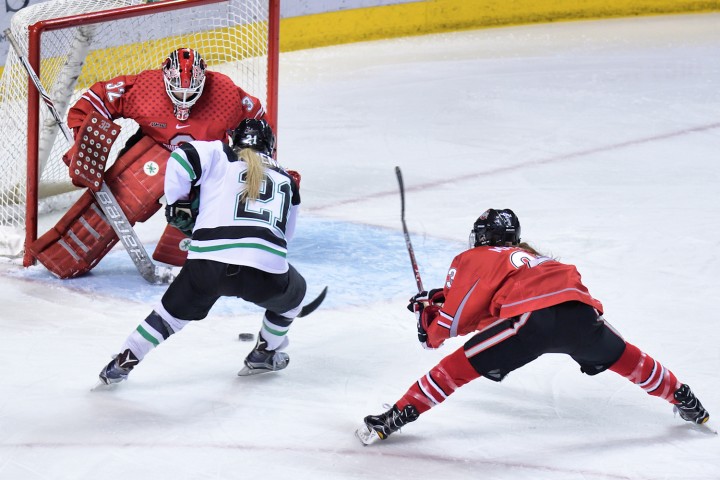 Ohio State has undergone an impressive transformation under first-year head coach Nadine Muzerall. With an in-conference win percentage of .339, they’ve seen significant improvement from last season’s .232 mark. That’s in spite of losing their leading scorer over the last two seasons when Claudia Kepler transferred to the Badgers.

The Buckeyes are a team capable of surprising just about anyone. Some of that has been the emergence of sophomore Maddy Field, whose 27 points leads the team by 12. They’ve also been able to lean on freshman defenseman Jincy Dunne, who has logged an incredible number of minutes, occasionally alongside her sister Jessica.

But more than anything, goaltender Kassidy Sauve has been their “rock,” as coach Muzerall put it. Sauve sat out last year following double hip surgery and has been outstanding since returning. Her .943 save percentage is third in the nation. She’s the only goaltender whose save percentage is in the top six nationally and isn’t playing behind the defense of a nationally ranked team (excluding Sacred Heart’s Sarah Erban). That’s been done playing in a conference that features three of the top four teams in the U.S.

Ohio State is obviously not favored to win the thing, but there’s no doubt they could surprise a team or two. Especially since all it takes is a hot goaltender.

Kassidy Sauve, RS-So., G — In case it wasn’t clear above, Sauve is this team’s heartbeat. Their offense hasn’t been overly strong and all eyes will be on their ability to defend. The path past Ohio State is all about solving Sauve.