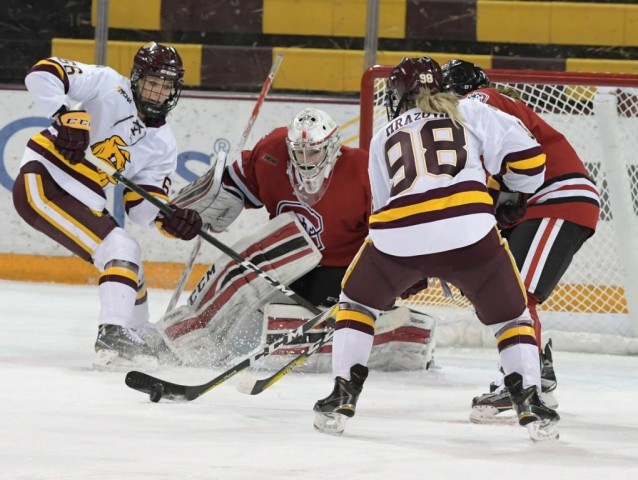 The future is bright for St. Cloud, but the future may not be right now. It wasn’t a group of seniors leading the charge offensively, but sophomores Julia Tylke and Hannah Potrykus, as well as freshman Kayla. They rank as the team’s top three point producers.

In net, they have 21-year-old Swiss freshman Janine Alder, who has a .929 save percentage and has weathered a lot of shots this season. Her numbers are good, but even though she doesn’t have the gaudy marks of, say, Desbiens or Sauve, she’s kept the Huskies in games that probably shouldn’t have been as close as they were.

While it was an extreme case, that game is kind of a microcosm of how they’ve fared against top competition. The Huskies averaged just 1.74 goals per game (even fewer in-conference). They scored the third fewest goals and allowed the second most.

Julia Tylke, So., F — The sophomore leads the team in scoring and is leading a group of underclassmen that could help St. Cloud rise in the conference in years to come. If they steal a game against Duluth during the playoffs it may be because of Alder. However, they’ll need the few players doing damage in the offensive zone to do the work as well.