WCHA women tab Brandt, Schammel as Players of the week 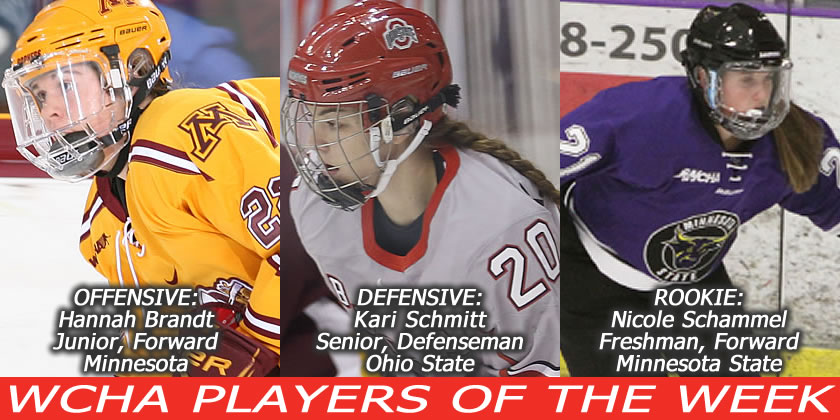 EDINA, Minn. – Jan. 13, 2015 – One helped her team capture five of six points in a showdown of league leaders, one spurred her squad to a third consecutive road series sweep and one led her school to its first victories of the season. For their efforts, the Western Collegiate Hockey Association (WCHA) women’s Players of the Week for games of Jan. 7-11, 2015 are: Minnesota junior forward Hannah Brandt (Offensive Player of the Week), Ohio State senior defenseman Kari Schmitt (Defensive Player of the Week), and Minnesota State freshman forward Nicole Schammel (Rookie of the Week).

WCHA Offensive Player of the Week

Brandt led No. 2 Minnesota with four points (3g, 1a) as the Gophers captured five of six points from third-ranked Wisconsin last weekend at Ridder Arena. The junior from Vadnais Heights, Minn. scored the game-winning goal with a tie-breaking strike late in the second period on Saturday, before adding an assist and a second goal in the third period of Minnesota’s 4-1 victory. Brandt then scored the game-tying goal at the 13:28 mark of the third period Sunday and potted the lone goal in the Gophers’ 1-0 shootout win. She finished the weekend with a +3 rating, 13 shots on goal and a .767 faceoff winning percentage (33-of-43). A reigning All-American and Patty Kazmaier Award top-three finalist, Brandt ranks second nationally and leads the WCHA with 45 points (21g, 24a).

Schmitt, a senior defenseman from Canton, Mich., sparked the Ohio State offense with three goals in a WCHA series sweep at St. Cloud State. She jump-started a 3-1 win on Friday with the Buckeyes’ first goal, a power-play strike in the first period. Schmitt then recorded a two-goal performance, including the game-winning score, in Saturday’s 4-0 triumph – Ohio State’s sixth consecutive win. Schmitt is tied for ninth among all NCAA defenseman (fifth in the WCHA) with 15 points (4g, 11a).

Schammel picked up four assists in two games to help Minnesota State to its first wins of the season – a pair of road victories at Lindenwood. The freshman from Red Wing, Minn. recorded two helpers in a 4-1 triumph last Wednesday in the Mavericks’ first win. Two nights later, she recorded assists on the game-tying and game-winning goals to lead the Mavs to a 3-2, comeback victory. Schammel leads the team in points (11) and assists (7), and is tied for the team lead with four goals during her rookie campaign.