Gophers, Badgers once again poised to battle for conference supremacy 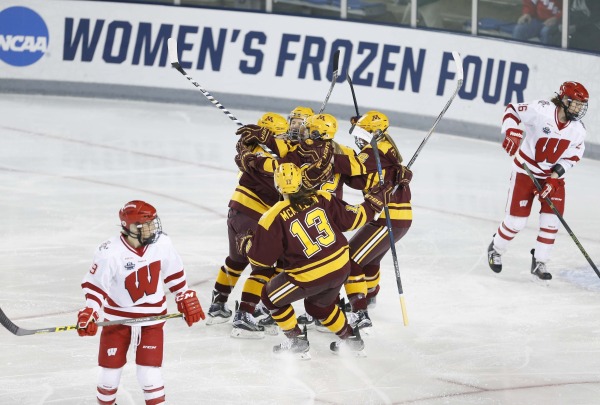 Gophers, Badgers once again poised to battle for conference supremacy and more

The WCHA looks to be one of college hockey’s best conferences once again, and that’s no surprise. Though there are plenty of surprises inside the conference, including the continued rise of the Badgers who start the season ranked number one in preseason polls. They’re followed by the Gophers, who have won four of the last five national championships.

But there is plenty of room for competition inside the division below the two behemoths. Here’s a full preview of the 2016-17 WCHA season. 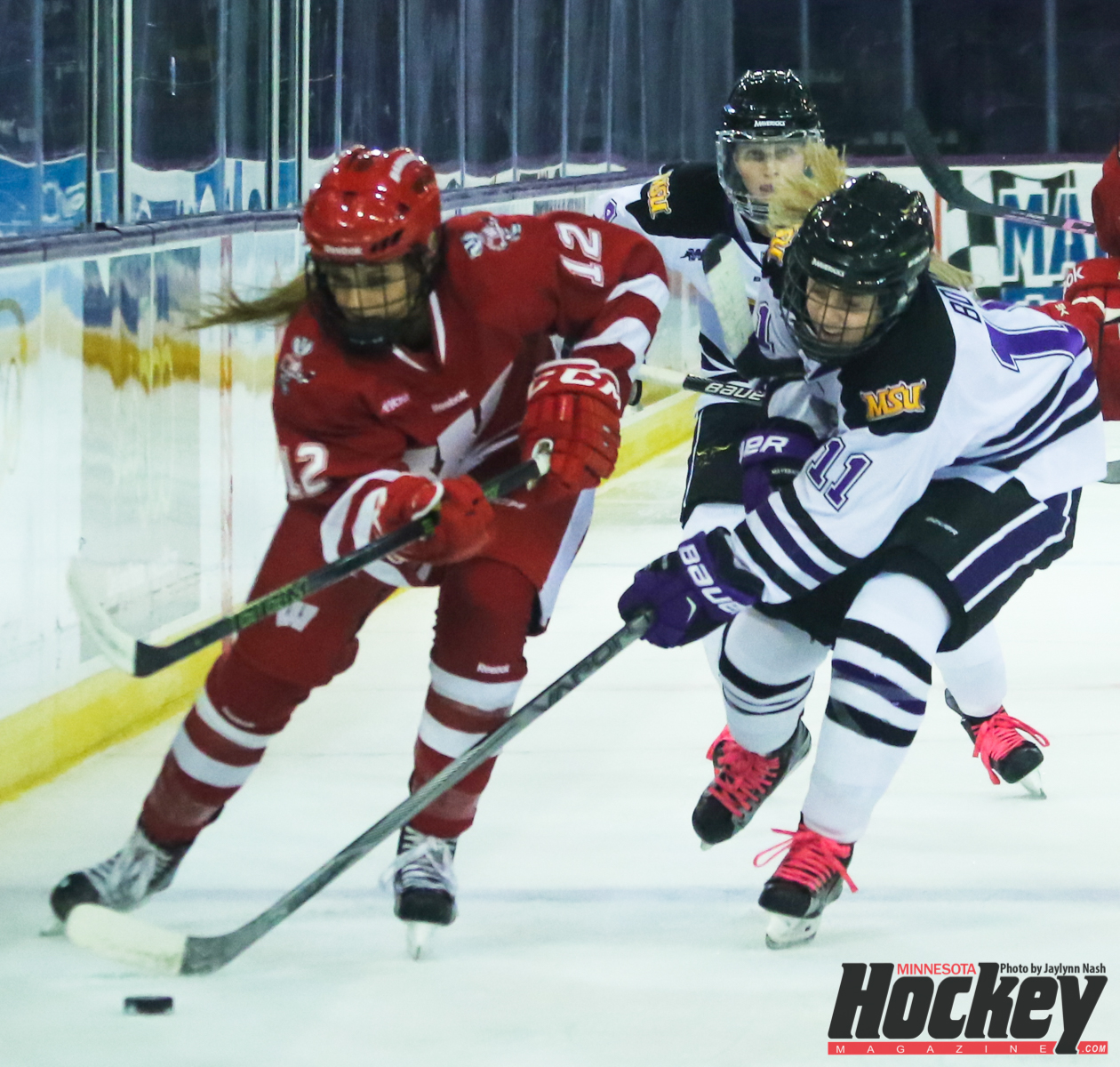 The Badgers enter the season ranked number one in the nation in the preseason USCHO poll. It’s easy to see why. They were dominant last year, emerging as the WCHA regular season champions and WCHA Tournament Champions, and they haven’t lost many key players.

The Badgers return six of their seven top-scoring players, including their top four which featured Annie Pankowski, a Patty Kazmaier Top-10 Finalist who finished seventh overall in points nationwide.

Even more crucial to their ranking is the return of record-setting goaltender Ann-Renée Desbiens, who was a Top-3 Patty Kazmaier Finalist, WCHA Player of the Year and set NCAA single-season records for goals-against average (0.76), save percentage (.960), and shutouts (21). That shutout record included a run where the Badgers didn’t allow a goal in 10 hours, 24 minutes and 18 seconds, a stretch that ran from Oct. 3 to Nov. 14.

With Courtney Burke the only key player to depart the program, the Badgers could be even better this season. Desbiens was named the WCHA’s preseason Player of the Year and the Badgers are home to two of the three players who tied for WCHA preseason Rookie of the Year, Presley Norby and Abby Roque. 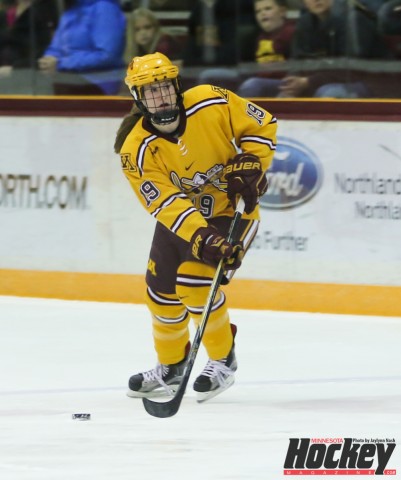 The Gophers are a perennial favorite, and they start the season ranked second nationally in the USCHO coaches poll. Despite winning their second straight national title last year — their fourth in five seasons — the Gophers were pretty evenly matched with the Badgers and Boston College Eagles last season. And they may have lost more in graduating players than either team. (Though BC took some serious losses as well.)

Starting goaltender of the last three seasons, Amanda Leveille, graduated and moved on to the NWHL. Annual Patty Kazmaier finalist Hannah Brandt is gone, as is Olympian Amanda Kessel.

It’s a big burden to put on the shoulders of the team’s current leaders, including Olympic defenseman Lee Stecklein, center Kelly Pannek, leading scorer (fifth in the nation by PPG) Dani Cameranesi, and sophomore Sarah Potomak, who was voted USCHO National Rookie of the Year last season.

Additionally, the Gophers have some promising freshman, including Lindsay Agnew who was good in the gophers’ exhibition game against the Minnesota Whitecaps and tied with Norby and Roque for WCHA Preseason Rookie of the Year.

A lot may fall on the shoulders of goaltender Sidney Peters, a junior, who has been with the team under Amanda Leveille for three years. If she’s up to the task of filling Leveille’s skates the Gophers could easily make another run, but it will be tough. Last season, they split their matches with the Badgers, going 2-2-0 during the regular season. The Badgers beat the Gophers in the WCHA Championship, then the Gophers beat the Badgers (in overtime, no less) at the Frozen Four to advance to the national championship. They remain a powerhouse, but not without competitors.

Senior forward Amy Menke will be one of their key players to watch this season, as will senior Halli Krzyzaniak, whose all-around play doesn’t come through on the score sheet but is strong enough to earn her a spot on the Canadian national team and a 16th overall selection in the 2016 NWHL Draft.

Goaltending could be weaker than last year with the graduation of All-American Shelby Amsley-Benzie, owner of almost every goaltending record in school history. UND’s success was in no small part due to her .930 save percentage in 31 games last season. That follows on the heels of a 28-game run in her junior year with a .952 save percentage.

Senior Lexie Shaw will take over in net and while coach Brian Idalski isn’t concerned about her ability to take the reins, she hasn’t seen much game action behind the heavy workload shouldered by Amsley-Benzie. Shaw played just 13 total games over the last two seasons.

North Dakota was the only team in the conference that beat the Badgers and Gophers last season. With a large number of returning players, no one is taking them lightly. 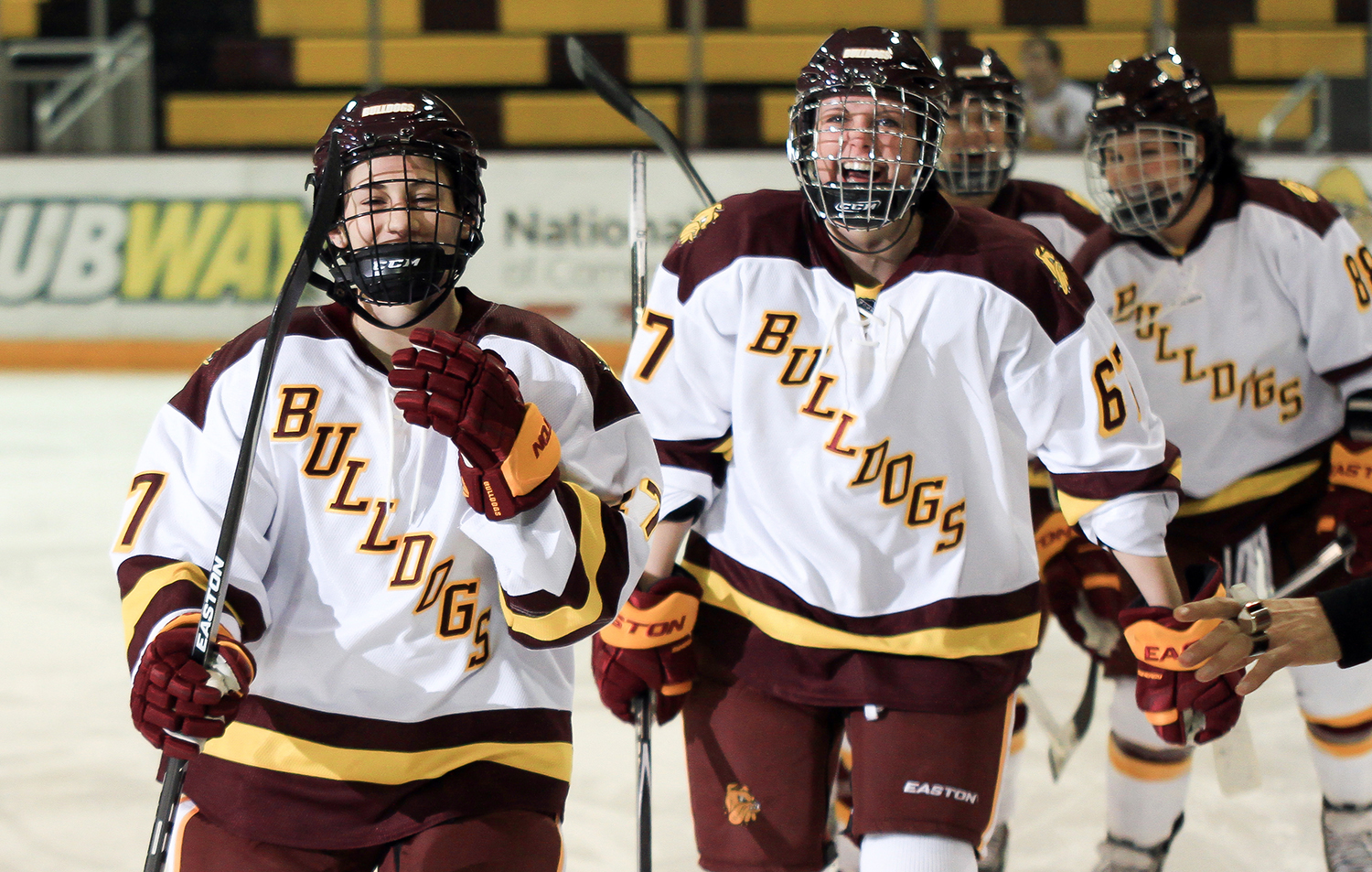 Scoring shouldn’t be an issue for UMD but questions remain regarding blue line depth and goaltending as the 2016-17 season gets underway. (File photo by Dave Harwig / Special to MHM)

The Bulldogs finished sixth in the WCHA last season, but that masks what a tough schedule they had. They proved that by upsetting number three-ranked Bemidji in the WCHA Tournament’s quarterfinals.

They’ll enter this season ranked fourth in the WCHA and though they’re outside the top 10 nationally, they did receive votes. This season’s schedule isn’t going to be any easier, though. The team starts with a non-conference series against Boston College, who lost only one game last year. That was the national championship against the Gophers.

The Bulldogs only graduated three players from last season. They’ll benefit from the return of Ashleigh Brykaliuk, who ranked 10th in the nation in points per game at 1.27. Unfortunately, key contributors Michela Cava and goaltender Kayla Black were two of the graduating players.

Duluth should be able to score, but their defense and goaltending have questions yet to be answered. Highly talented defensemen Sidney Morin and Jessica Healey are back, but the defenders after those two are going to have to step up and support their forwards.

The team is also expecting a lot out of sophomore goaltender Maddie Rooney, a Duluth-native who is going to be in her first season as the number one goaltender. Last season she went 5-12 with a 3.18 goals-against average and an .899 save percentage. She and Black both started 19 games last season, though Black’s 2.47 goals-against average and .919 save percentage looked much better. 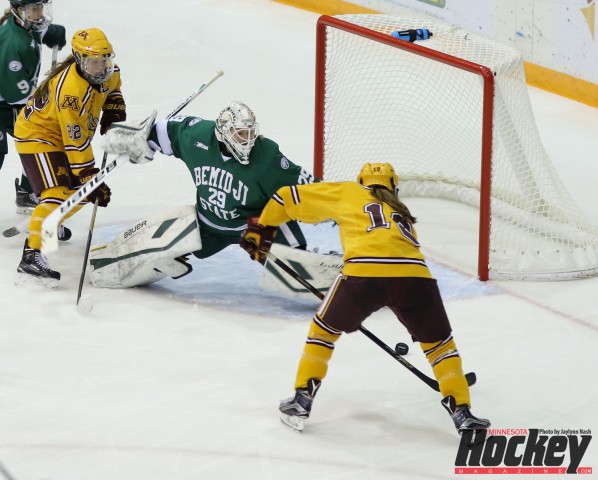 Bemidji State’s Brittni Mowat has been a stalwart tin the BSU net and the senior goaltender gives the Beavers a chance night in and night out. (MHM Photo / Jaylynn Nash)

Bemidji State will be looking to grow once again this year. Last season, they set a school record with 22 wins but suffered a disappointing upset at the hands of Duluth in the WCHA Tournament. Nonetheless, continued growth could be on the docket.

They’ve been selected to finish fifth in the conference this year by the USCHO poll, but they’ve got some challenges ahead of them. They graduated nine players, including five of their top seven in total points and four of their top six goal scorers.

Senior goaltender Brittni Mowat was a First Team All-American in 2014-15, and will again be a key to Bemidji becoming more than the sum of their parts. Led by Mowat and defenseman Madison Hutchison their back-end is where their strength lies, and that’s a big reason they received the most votes in the national poll among teams sitting outside the top 10. 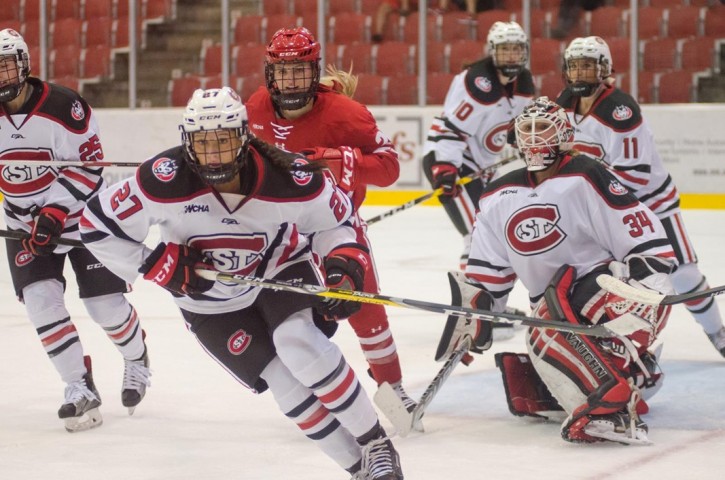 St. Cloud is coming off the program’s best season since 2009-10, which, in the preseason coaches poll, was only enough to keep them floating above Ohio State and Minnesota State at the bottom of the WCHA. In his second season coaching the program, Eric Rud will look to keep pushing up the standings.

The future is getting brighter with the team’s top returning scorer being sophomore forward and 2015-16 All-WCHA Rookie Team honoree Julia Tylke. She put up nine goals and 24 points last year, the most by an SCSU rookie since the 2006-07 season when Holly Roberts and Caitlin Hogan hit 35 and 29, respectively.

However, they’ve lost 40 percent of their goals from last season to graduation, which could hit the team hard. That includes their only point per game player in Molly Illikainen.

They also lost starting goaltender Katie Fitzgerald, now with the New York Riveters of the NWHL, to graduation. The battle for number one will be between former Union goaltender Madeleine Dahl, sophomore Taylor Crosby (who stopped 49 of 52 Badger shots in an opening weekend loss), and freshman Janine Adler, who won a bronze medal in 2014 as the goaltender of the Swiss national team at the Sochi Olympics.

Their biggest asset may be that they are returning six of seven defensemen, making for a seamless transition in front of a fluid goaltending situation. That instant defensive chemistry will be an asset to whoever grabs the starting job in St. Cloud, even if it winds up being more of an even split between Dahl and Crosby.

It’s a time of significant transition for the Buckeyes. They’ve had yet another coach move on. Incoming head coach Nadine Muzerall — Ohio’s third head coach in three years — was previously an assistant with the Gophers and was a significant part of the recruitment process there. That experience could bode well for the future. As could the addition of former Bulldog forward Jessica Koizumi to the coaching staff. To take the position, Koizumi retired from the NWHL, where she gained valuable experience and some insight that could be valuable to incoming recruits.

However, that’s all down the road. This year could be tough sledding. It probably would have been anyhow, but the team lost leading scorer Claudia Kepler, who will red shirt with the Badgers this year, then join them for the 2016-17 season. Kepler is one of five underclassmen who left the program.

Yet, there’s hope for the future in Ohio and not just because of a coaching staff that could get things moving in the right direction. Goaltender Kassidy Sauve is back. She was the WCHA’s top rookie goaltender two seasons ago but missed last season due to injury. Defenseman Jincy Dunne had to redshirt last year due to injury, but is a highly regarded rookie and even received a vote for preseason Rookie of the Year. Additionally, sophomore Jacyn Reeves has transferred from Union and could help bring a little more offense to the table in the absence of Kepler.

They’re a program on the rise, but it could be a tough year for the Buckeyes. 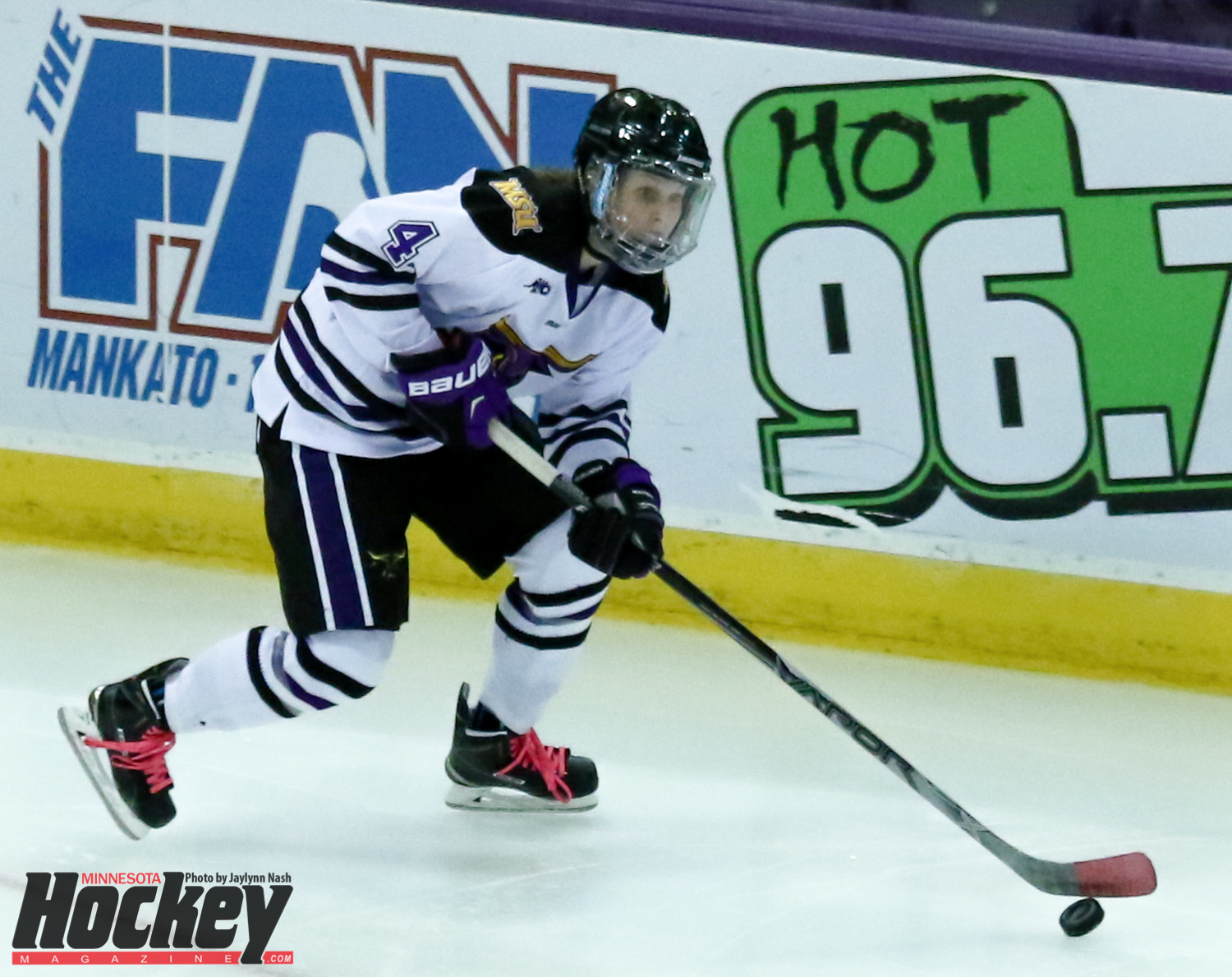 Sophomore F Emily Antony of Plymouth will be looked upon to build on her offensive output from her rookie campaign in Mankato. (MHM Photo / Jaylynn Nash)

The Mavericks had a bad 2015-16 season. They didn’t win a single game against a conference opponent and predictably start the season ranked at the bottom of the WCHA.

Second-year coach John Harrington will have a challenge on his hands to get improvement from the team with leading scorer Katie Johnson departing the program. Scoring was the team’s biggest issue last year already.

But senior goaltender Brianna Quade is back. She was pivotal in the success they did have last year, posting an .899 save percentage in 35 games.

All told, they’re returning 18 players including promising sophomore Emily Antony, who will have to shoulder more offensive responsibility this season after scoring six goals and 16 points last year.

The Mavericks also need freshman Sofia Poinar to help solve their scoring woes. The Chanhassen-native was a strong scorer in high school and the team will hope she adapts to the college game quickly.