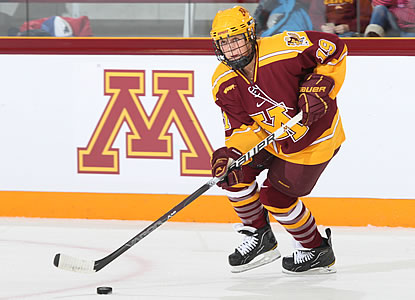 
Minnesota extended its winning streak to 18 games in sweeping Minnesota Duluth on the road for the first time since Oct. 26-27, 2007. Freshman Maryanne Menefee scored twice while fellow rookie, Hannah Brandt, and  junior Amanda Kessel each added a pair of assists toward Friday’s win. UMD junior forward, Jamie Kenyon, scored the lone goal of the series for the Bulldogs early in the third period but Gopher goalie Noora Räty stopped all 23 other  UMD shots in the opener. Minnesota-Duluth goaltender, Kayla Black made 23 of her series total of 52 saves on Friday.

In Saturday’s finale, Senior defenseman, Megan Bozek, scored twice–her second and third goals of the series–and Räty made 17 saves in shutting out the Bulldogs. Brandt added two more assists to maintain her team and national points lead at 33 (12-21–33) while Kessel scored her team-leading 15th goal of the season, which also leads the nation. In addition, Bozek’s 18 points (6-12–18) tops all Division I defensemen.


Wisconsin goaltender Alex Rigsby, last week’s WCHA Defensive Player of the Week, extended her shutout streak to 189 minutes in blanking the Mavericks twice in Madison. With the exception goaltender Danielle Butters‘ 72 saves in the series, not much went right for MSU in two games at LaBahn Arena. Warroad’s Karley Sylvester contributed an assist in each game for the Badgers.

With a goal on Friday and a pair of assists on Saturday,  Ohio State sophomore forward Taylor Kuehl–and reigning WCHA Offensive Player of the Week–of Minnetrista, Minn. helped lead the Buckeyes to a sweep of the Huskies in St. Cloud. Edina’s Ellie Sitek recorded her first goal of the season early in the third period of the series opener but OSU answered just over six minutes later on a Tina Hollwell goal which would become the game winner. SCSU goaltender Julie Friend of Minnetonka took the loss on Friday despite her 32-save effort.

Audrey Hamner had a goal and an assist in Saturday’s loss at home to Ohio State (Photo: St. Cloud State University Athletics)

Andover’s Alex Nelson got the Huskies on the board first on Saturday and a late second-period goal by Audrey Hamner of Wyoming, Minn. gave St. Cloud State a 2-1 lead heading into the third, but Ohio State countered with a trio of third-period goals to put the game away. Kuehl assisted on Hollowell’s empty-net goal at the 19 minute mark to seal the sweep for the Buckeyes.


North Dakota freshman goaltender Shelby Amsely-Benzie of Warroad made 23 saves to earn her second win of the season and help UND salvage a split in its non-conference series with visiting Clarkson University on Saturday. Mary Loken, a senior forward from Roseau, assisted on Jocelyne Lamoureux‘s 100th collegiate goal at 3:16 of the second period in the win.