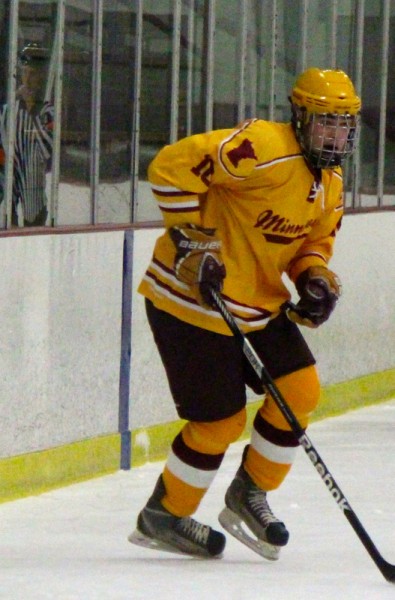 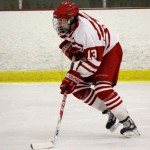 Madison, WI— In their first series back from Thanksgiving Break, the Badgers faced a very familiar foe.  This series, dubbed “the border battle,” featured Wisconsin and their next-door neighbor, the Minnesota Gophers.  The Badgers came into the series last in WCCHA play, chasing Minnesota in front of them.

Friday night’s game featured the Badgers 5th year senior goaltender Ben Cohn in his last collegiate start against a depleted Gophers team.  Despite being shorthanded, the Gophers came out hot, scoring two goals in the first period and heading to the locker room up 2-0.  But Bucky fought back, scoring three goals to Minnesota’s one in the second to tie the game at three.  In the game’s final period, the Badgers continued the comeback, prevailing in the contest 5-4.

With a quick turnaround between games, the Badgers took advantage of the shorthanded Gophers’ tired legs by jumping out to an early 3-0 start with goals from both Adam and Matt Vishny.  After two periods, the Badgers led 4-1, with another goal from Zach Vanderveldt.  The final score in Saturday’s game was 5-1 as the Badgers earned their first sweep of the season.

With the two wins, Wisconsin jumped above Minnesota in the WCCHA standings.  This past weekend was the last series of the semester for both teams.  Wisconsin will be back in action Friday, January 17th at Illinois State.  Up next for the Gophers is Minnesota-Duluth, in a WCCHA contest on January 24th.

IN OTHER CONFERENCE PLAY:

The first conference series between these two teams saw St. Thomas earn a home sweep to finish 2013 atop the WCCHA Standings.  Friday night’s game was controlled by St. Thomas, who won 7-1 thanks to a four goal effort from Will Pavek, a 4 assist game from Shael Hechter and a shutdown performance by goalie Justin Holmberg.  Saturday night’s game was much closer, as UWEC battled hard throughout but were unable to overcome the Tommies despite two goals from Jarrid Balz and one each from Austin King and Ben Boldenow.  Hechter led UST with a goal and three assists on the night, while Sam Olson chipped in two goals and an assist. 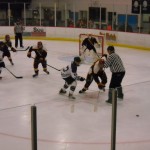 UMD took on conference-leading Waldorf College in Albert Lea and upset them in the first game Friday night.  Waldorf came out strong in the first period against a yet again short benched UMD squad, with Waldorf”s forward Dan Pletta scoring 2 goals in the first period.  UMD was able to capitalize on the power play late in the period making it a 2-1 game.  In the second period UMD freshman forward Tomas Rice scored in the first 30 seconds on a great individual effort.  Waldorf controlled the rest of the period with 20 shots on net but was unable to put one past UMD goalie Alex Glockner.  The third period was evenly matched until Waldorf defenseman Jake Taylor scored on the power play, making the score 3-2.  With only a minute left in the game, UMD defenseman Rick Weber scored from the point forcing overtime.  A costly Waldorf penalty resulted in the OT game winner as senior forward Aaron Theis scored on a pretty tic tac toe play.  Final UMD 4, Waldorf 3 in OT.

Tensions were high in the penalty-filled second game.  Waldorf came out strong again scoring 2 quick goals in the first.  UMD battled back and was able to tie the game 2-2 late in the period.  From there on out Waldorf controlled the game scoring 2 in each of the second and third periods racking up 53 shots in the game.  The bulldogs had a hard time staying out of the penalty box as they received 63 penalty minutes with only 10 skaters.  Final was 6-2 Waldorf and a series split.

With Waldorf splitting their series and NMU with a win and tie against St. Cloud, St. Thomas took over first place in the WCCHA going into the holidays.