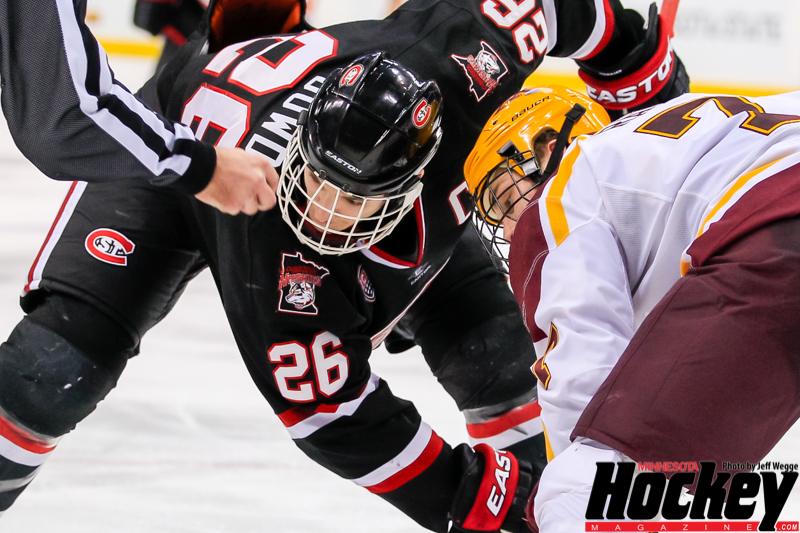 Nic Dowd and St. Cloud State are digging in for another run at an NCAA title. (MHM Photo / Jeff Wegge)

SAINT PAUL—St. Cloud State is back.

The Huskies are back in the sense it’s been two weeks since they’ve seen game action following a surprising pair of one-goal losses to Miami in the first round of the NCHC playoffs which cost them a trip to Minneapolis and a berth in last week’s NCHC Frozen Faceoff.

SCSU is back in St. Paul two months after beating Minnesota State 6-4 in the consolation game of the North Star College Cup.

But most importantly, St. Cloud State is back in the NCAA Tournament in consecutive seasons for the first time since 2008 and is prepared to square off at 8:00 p.m. tonight against Notre Dame at Xcel Energy Center. The encounter comes just short of a year to the day after the Huskies pummeled the Irish 5-1 in the first game of the 2013 Midwest Regional en route to the first Frozen Four appearance in school history.

St. Cloud State coach Bob Motzko says there are pros and cons to playing this close to home at this time of year.

“There’s a lot of good and there’s some bad with that—the distractions—but that’s all good because our fans can get down here,” Motzko said.  “We didn’t give them the opportunity to go down to Minneapolis last week, so we’re anticipating that they’ll be excited to be down here and follow us this week.”

The Huskies are vying for back-to-back trips to the Frozen Four this weekend which would earn them a trip back to Pennsylvania, Philadelphia specifically, after a disappointing loss to Quinnipiac in Pittsburgh to end last season.

While St. Cloud State will have to accomplish the feat without the only three players on last year’s team with tournament experience (Drew LeBlanc, Ben Hanowski and Taylor Johnson) and their 87 points (30-57–87) due to graduation, the Huskies’ roster comes equipped with 22 players carrying over from 2013’s Frozen Four run. But the Huskies don’t necessarily believe the experience gives them much of an edge.

“I guess I’d be lying if you say you know exactly what you’re in for,” senior captain Nic Dowd said. “Having been there one year, does that make a bigger difference than coming in last year? I don’t think so. I think Kevin (Gravel) said it best in a previous interview. You’ve got to expect the unexpected.”

“We have a lot of guys back this year that played last year and played a lot of big minutes in a lot of big games and that can be looked at as a positive,” Gravel added. “But, at the same time, you face a new challenge every time you come into a game like this, in a tournament like this.”

With the loss of his seniors combined with skilled, minutes-logging defenseman Nick Jensen’s decision to forgo his senior season to sign with the Detroit Red Wings’ organization, Motzko was concerned heading into the 2013-14 season that his team might succumb to a Frozen Four funk.

But SCSU got off to a 11-1-2 start including 6-1-1 in the NCHC, a league it led or tied virtually from start to finish, and won its second straight regular season conference title.

“I think that was the telling-tale of this team, we started the year right where we left off,” Motzko said. “We had a bounce from it, we didn’t have a setback … and that really stemmed from the leadership of our team and how we handled last year’s success. We carried it right from day one this year.”

That begins with Dowd , the senior Hobey Baker Award Top 10 finalist from Huntsville, Ala. whose list of accolades seems to grow daily after a 39-point season (21-18–39) season. In addition to the Hobey nomination, Dowd earned first-team All-NCHC and All-NCHC Academic honors, the NCHC Defensive Forward of the Year award and was named NCHC Student-Athlete of the Year.

Like Jensen, Dowd too had the opportunity to sign a pro contract over the summer. However, the seventh-round (No. 198 overall) selection by the Los Angeles Kings in the 2009 NHL Draft opted to return for his senior season but not for the reason that immediately comes to mind.

“It wasn’t what we had coming back and the possibility of winning another championship, it was the team and the university and my head coach and my roommate [Gravel], who I’ve known for a while, that drew me back,” Dowd said. “I think one of the biggest things I learned from seniors above me is guys want to leave their mark on a program and you want to give back as much as the university, my coaching staff and my teammates have given to me.

“It’s almost like something bigger than yourself and playing at St. Cloud State has been the best four years of my life.”

As devastating as the playoff losses to Miami were to St. Cloud State’s hopes of playing for a conference playoff championship, the Huskies played the second half of their season without a bye week and fatigue was setting in. The unwanted weekend off allowed Motzko to give his team a breather while giving banged up players a chance to heal.

“It’s been good. I think Coach has done a good job managing not only the length of our practices, but the days that we choose to practice on and days off, and workouts, et cetera,” Dowd said. “It left a pretty bitter taste in our mouth when we didn’t make it to the conference tournament. …But from the standpoint of not having a bye the second half of the season, it felt pretty good for our guys to get a mental break.”

Motzko used the extra time to engage in some fine tuning of his team with few short but pointed practices before focusing attention on Notre Dame.

“We went back to detail in a handful of small areas,” Motzko said. “We wanted to just get our good habits going again.”

In Mozko’s eyes, the tournament doesn’t truly get started until after the first game and has been imparting upon his players the importance of getting off to a good start.

“You’ve got to win to get momentum going and to be part of the tournament,” Motzko said. “It’s a terrible feeling to lose the first game and then go home.

“We’ve got great leadership, they’ve handled every challenge that’s come upon them this year, and we have to leave it in their hands to be ready.”