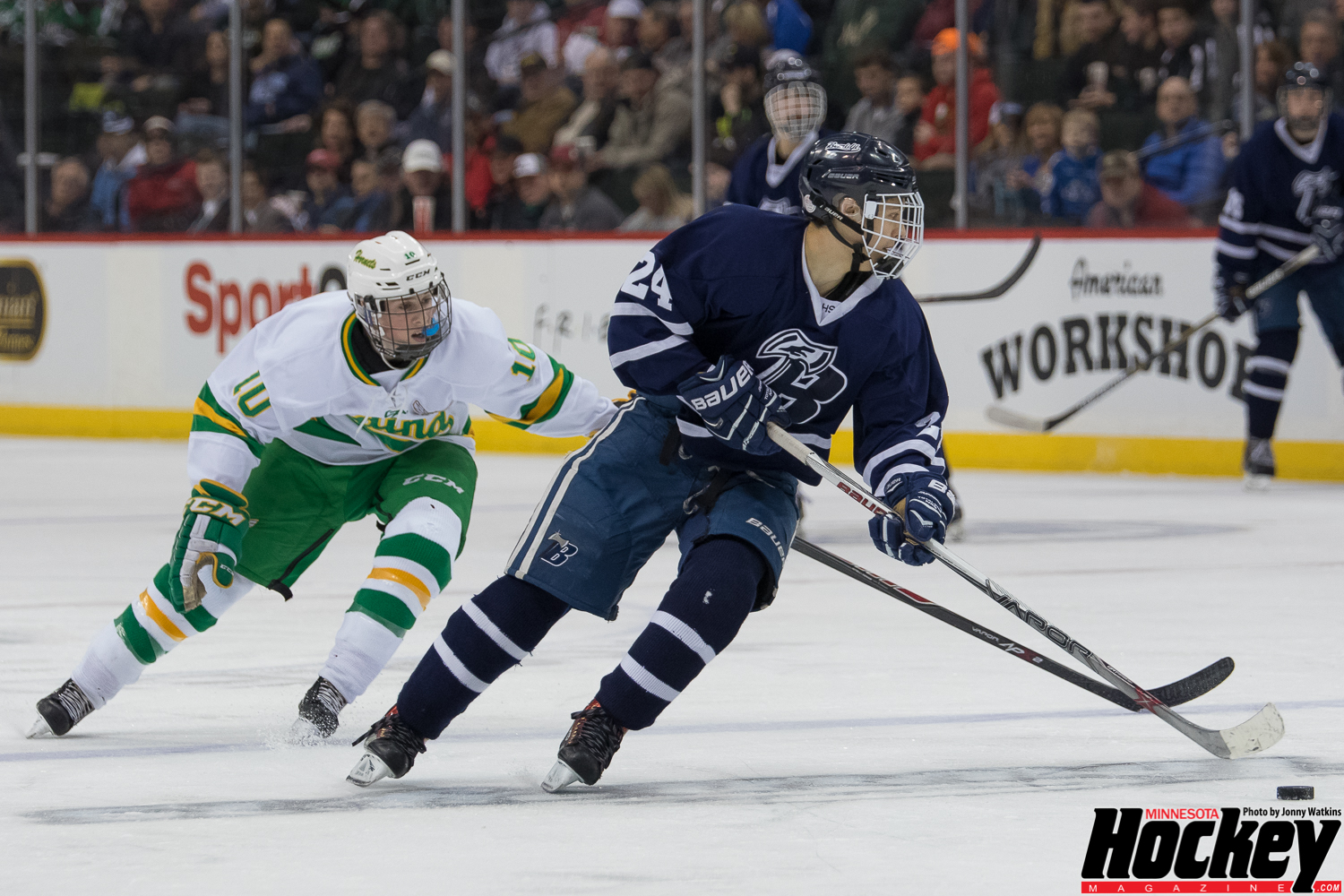 Defenseman Chase Hartje is one of two Bemidji players, his brother Cole being the other, whose father played for the Lumberjacks the last time they made a trip to the state tournament back in 1986. (MHM Photo / Jonathan Watkins)

Current members of the Bemidji Lumberjacks had not known the first-hand experience of their hometown team going to the state boys hockey tournament until now.

Moreover, no one in Bemidji born after 1986 has witnessed the excitement of their Lumberjacks competing in Minnesota high school hockey’s biggest stage. They could only go by the stories of those who played or followed the Lumberjacks teams in the mid 1980s and before when the program last appeared at state.

Fittingly, three members of the state entrant Bemidji team this season grew up hearing of those stories from their fathers who played on Lumberjack state squads in the 1980s or 1970s. Jack Johnson, Michael Forseth, Chase Hartje and his brother, Cole, helped the Lumberjacks end a 29-year state tournament drought.

“We haven’t even seen a team come down here from Bemidji, so it’s kind of a first,” Forseth said. “We’re excited and just happy to be here.”

Against No. 2 seed Edina on Thursday in the Class 2A state tournament, Bemidji looked more like a team out for a colossal upset than content just to be at the Xcel Energy Center. A goal by Johnson and then Josh Lusby in less than two minutes apart toward the end of the third period had the Lumberjacks within a goal of the two-time defending champs.

Only an empty-netter in the final seconds by Edina seemed to keep its title hopes off the chopping blocks. Nonetheless, the Lumberjacks wowed the full house at the X and a community that had not seen its team in state hockey in almost three decades.

“People are going to be excited, and they should be because we have good hockey team,” Lumberjacks coach Wade Chiodo said.

Support has flooded in for the team since beating Moorhead 2-0 on Feb. 25 for the Section 8AA championship in Thief River Falls, where Chiodo grew up. Chiodo has coached the Lumberjacks to the section finals twice now in his seven years at the helm.

Last time came in 2011 when they fell 2-0 to Moorhead in TRF. Either the Spuds or Roseau had won Section 8AA and gone to state for 19-straight years until the Lumberjacks won the 8AA crown last month.

Winning gave cause for the Bemidji community to celebrate like it hadn’t in 29 years.

“Everybody’s supporting us,” Forseth said. “The whole week, the town’s just been buzzing, so it’s been really awesome to see all of our fans follow us down here.”

Messages of support rolled in throughout the week – even from members of past state teams from a while ago. Chiodo received a message from former goalie Steve Peters, who net-minded for the Lumberjacks on a state tournament team in the 1980s.

Bemidji fans purchased 1,000 tickets at school prior to the tournament. It looked and sounded like more than that on Thursday at the X.

“Yeah, at the end there when the crowd erupted it was pretty loud,” Forseth said. “That was cool.”

Forseth’s father also experienced playing in front of a state tournament crowd in 1976 with the Lumberjaks. Johnson’s father did too in 1985 when Bemidji again made state. The Hartje brothers’ father also did in the former last Lumberjack state trip in 1986.

Current Bemidji players Jake and Nick Leitner also have ties to the last time a Lumberjack team played in state since their mother attended the school at the time. Jake led the team offensively with 47 points going into state.

He had a goal against the Hornets and pulled his team within a point at 3-2 in the second period. Bemidji had been down 3-0 through the first period.

“It took us the first period to get them [the nerves] out,” Forseth said. “We started off a little slow [and] a little shaky, but once we got them out, we started coming back in the game.”

After all, the Lumberjacks were playing for a community that hadn’t seen this in 29 years.