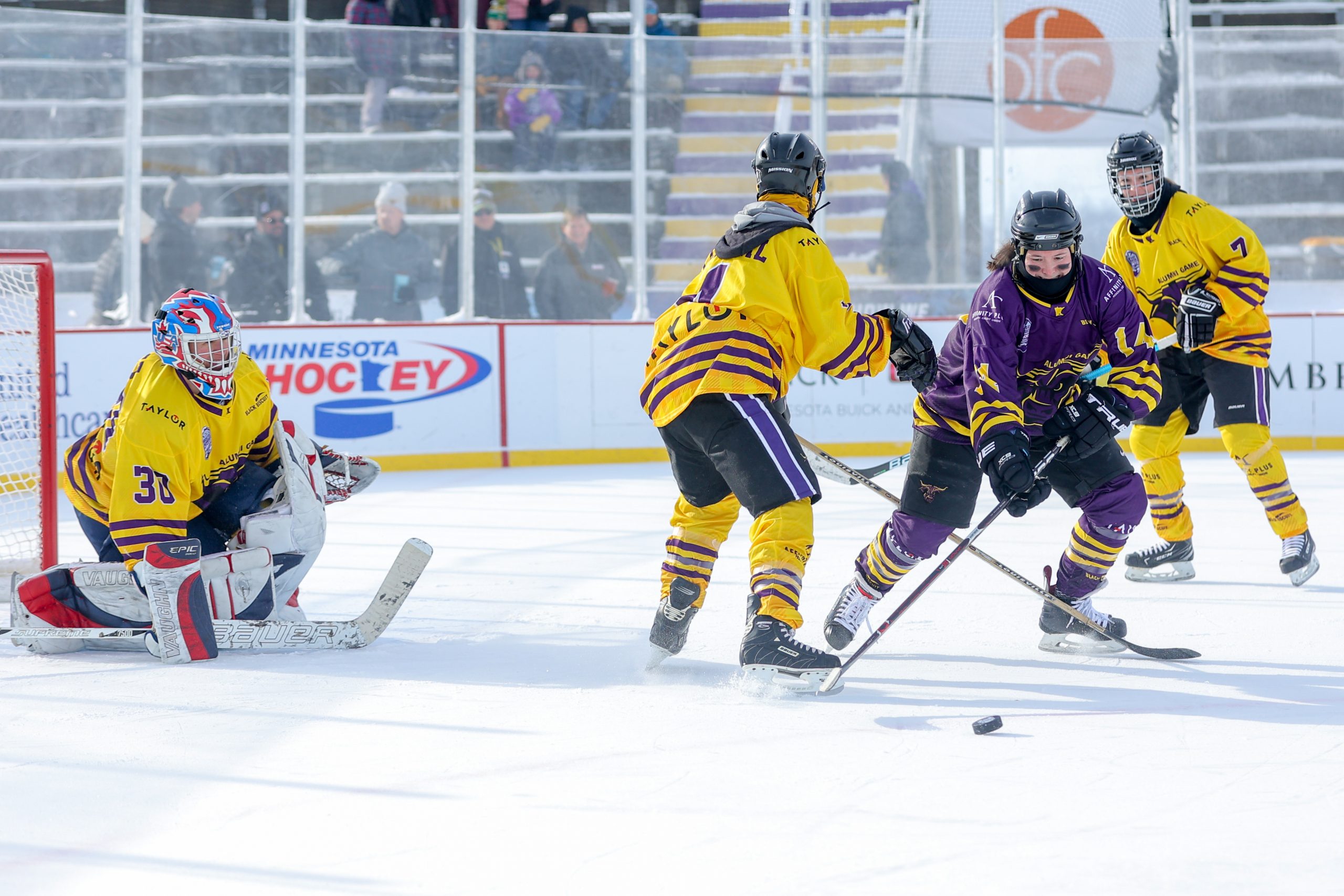 The purple duo reunited to put a trio of pucks behind current MSU women’s assistant coach, and the program’s most decorated player, Shari (Vogt) Dickerman, in yellow. Dickerman was gracious in defeat, however.

“Fisher and Bunker seemed to migrate to the same line just like the old days so it was fun to see them kind of shine a little bit,” Dickerman said. “Hopefully the crowd got fired up for those guys back in town.”

Despite a four-year gap in her tenure as a player and/or coach at Minnesota State, Dickerman has either played with or coached nearly all of the alumni game participants and even those she didn’t, like Fisher and Bunker, she knows well.

“This was awesome that this many people were able to make it,” said Dickerman, a four-time All-American and team MVP (2000-04) and Patty Kazmaier Award finalist as a senior.

Fisher said a few of the former players came down Friday and attended the MSU men’s alumni game together followed by a gathering with the whole group on Saturday. Fisher added, “the turnout was massive this year, so it was nice to have 20 girls on each team.”

The former South St. Paul High School star who racked up 173 goals and 345 points in 155 games as a Packer says she doesn’t play much hockey anymore so it was kind of nice to play with different people, Bunker notwithstanding.

“Our objective for the purple team was if you had four in the zone, then you couldn’t go in there,” Fisher quipped. “So we’d always want to keep someone out high cherry picking.”

Like Fisher, Dickerman says she rarely straps on the pads anymore but had a lot of fun in this environment.

“It kind of comes back like riding a bike, only I’m tired after about three minutes,” joked Dickerman who was hoping to only play half the game but went the full 40 minutes when her team’s other goalie unexpectedly could not make it.

Fisher confirmed there was plenty of trash talk out there but Dickerman was oblivious to all of it.

“I’m sure the bench was chirping me quite a bit but I couldn’t hear them over in my own area, so I didn’t get to hear any,” Dickerman said with a smile.

Told of what Fisher said of the purple team’s game plan, Dickerman complimented Fisher’s skating, saying she “still can fly,” before getting in a playful shot of her own.

“Far blue, I think that’s kind of her spot, so that’s why she scored a lot of points.”