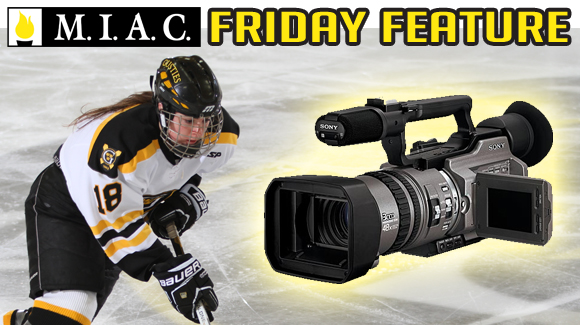 ST. PETER, Minn. — As a member of a women’s hockey program that has made four consecutive NCAA Frozen Four appearances, one would assume that team members are focused exclusively on their hockey experience. For Gustavus women’s hockey student-athlete Carolyn Draayer, however, hockey is only one component in her well-rounded and successful Division III collegiate experience. As a high-achieving student and athlete, video production also has a prominent spot on her resume of accomplishments.

Draayer exemplifies the Division III philosophy with her involvement in several groups on campus, which have shaped her experience at Gustavus. “I love the variety I can get,” said Draayer. “Instead of just hockey, I get to be involved in so many communities. It has made my experience so wonderful.” She strongly believes in the well-rounded collegiate experience.

In addition to her coursework and hockey practice, Draayer is working nearly 20 hours per week for the Office of Marketing and Communication at Gustavus as a video production intern this semester. She is in charge of producing three promotional videos designed to inform prospective students about the Gustavus experience. This internship allows Draayer to display her passion for video production while she utilizes skills learned through her Communication Studies major and Film Studies minor. 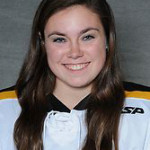 Draayer’s interest in video production began in early high school when she enrolled in a video editing and production class. She always enjoyed having a camera in her hands and decided to invest in buying a quality camera once she came to Gustavus. That led to her creating a video to promote the Gusties’ women’s hockey program and it’s storied tradition. The quality of her work caught the attention of the Gustavus community, and soon she was producing similar videos for the other athletic teams on campus which led to her latest video endeavors.

Draayer crafted a series of “Be the Difference” videos for Gustavus’ winter athletic teams that offer a look into the life and perspective of Gustie student-athletes.

The opportunity for Draayer to intern for the Office of Marketing and Communication was one she highly sought after. Combining her passion for video production with the ability to showcase the Gustavus community was an opportunity Draayer couldn’t pass up. “From the minute Carolyn approached me about pursuing an internship in our office, I was impressed by her passion for filmmaking and her positive approach to life,” said Kennedy.  “I had watched several of the short videos she had produced for our sports information office during the last school year and her creativity and ingenuity were very apparent.”

Draayer’s work didn’t just turn heads on her campus, it also caught the eye of Gustavus’ conference as well. This summer, the Minnesota Intercollegiate Athletic Conference (MIAC) enlisted the talented Gustie to produce a pair of videos for a branding and identity campaign. One video promoting sportsmanship in the MIAC first aired in late August, and she’s currently putting the finishing touches on another to highlight the MIAC’s tradition, schools, teams and values. [youtube id=”F0H0uDJb8sg” width=”420″ height=”315″]

“We were so impressed by the Gustavus women’s hockey promotional video that we reached out to the Gustie athletic department to find out more about how it was done,” said Matt Higgins, MIAC assistant executive director. “They put us in touch with Carolyn and, lucky for us, she was interested in doing something for the conference. It has been such a pleasure working with her on our two branding videos. Carolyn is so talented, and professional beyond her years.

“In the MIAC we always talk about showcasing our student-athletes’ talents, both on and off the field. Not only do these videos display that through their content, but the fact that they were produced by a MIAC student-athlete really demonstrates the talents present in our league beyond athletics.”

Gustie Women’s Hockey Head Coach Mike Carroll is proud of the way his player has taken full advantage of all Gustavus and the MIAC has to offer, both on and off the ice. “Hockey is just one of her passions,” said Carroll. “Carolyn has totally immersed  herself into the culture of the school with a laundry list of involvement in campus activities. Her current internship with the Vice President of Marketing and Communications is an example of what a student can do to make a difference here at Gustavus.”

Draayer’s success on and off of the ice is the result of her strong work ethic. In the office, she arrives to work early to prepare and stays late to complete tasks to the best of her abilities. On the ice, she is dedicated to always improving herself and leads her teammates by example.

After graduating a strong senior class, Draayer will step into a new role for her team this season. With her combination of skillful play and leadership, the coaching staff expects Draayer to have a big impact this season. “Carolyn brings a great deal of leadership to our team this year,” said Gustavus Women’s Assistant Coach Kirstin Peterson. “She has experience in every game type situation and embraces the opportunity to get better and be successful.  She is a kid who has speed, strength and can finish.”

Only a junior, Carolyn is one of Gustavus’ team captains, which is a direct reflection of her maturity and strong leadership. “Our team is different than last year,” said Draayer. “We graduated a strong senior class. Losing them and moving forward is new, but we have a good group of returners and our goals are always the same. We want to win the MIAC and win a national championship.”

During Draayer’s career as a Gustie, the women’s hockey team has compiled a record of 51-6-3 overall and 34-1-1 in the MIAC. In both her freshman and sophomore seasons, her team was crowned the MIAC regular season champions, solidified the automatic qualifying spot to the NCAA Tournament and finished top four in the nation. Individually, Draayer has been named the Most Outstanding First-Year Player as a freshman and All-Conference Honorable Mention as a sophomore. She was also named National Scholar Athlete by the American Hockey Coaches Association (AHCA) and voted Most Inspirational Player by her teammates following the  2012-13 season.[youtube id=”RSSkddsnBws” width=”620″ height=”360″]

Although she is often found behind the camera, Draayer’s high achievements in academics and athletics have positioned her in the spotlight. Last season, Draayer received the NCAA Division III Women’s Hockey Elite 89 Award, a recognition awarded to only one student-athlete in each NCAA sponsored sport. This award celebrates the student athlete that maintains the highest grade point average at the Championship site of the NCAA Tournament.

“It takes a unique athlete to come to Gustavus to pursue hockey and academics,” said Peterson. You have to be motivated on your own to get better because no one is watching you 24/7 like at many of the D-I institutions. She has demonstrated this on the ice, as well as in the classroom by receiving the Elite 89 award at the Frozen Four our last year.”

As for life after college, Draayer is unsure what her future entails. “I don’t have a dream job right now. This is such an evolving thing for me,” said Draayer. “I have thought about working for a production company or starting my own company after college. It’s something I’m trying to figure out.”

Regardless of what comes after college, Gustavus and their women’s hockey team are happy to have Draayer for the remainder of her career as a student-athlete.

“It is a real privilege to have her working on our staff this fall,” said Kennedy.