Minnesota riding a wave of second-half momentum with playoffs approaching 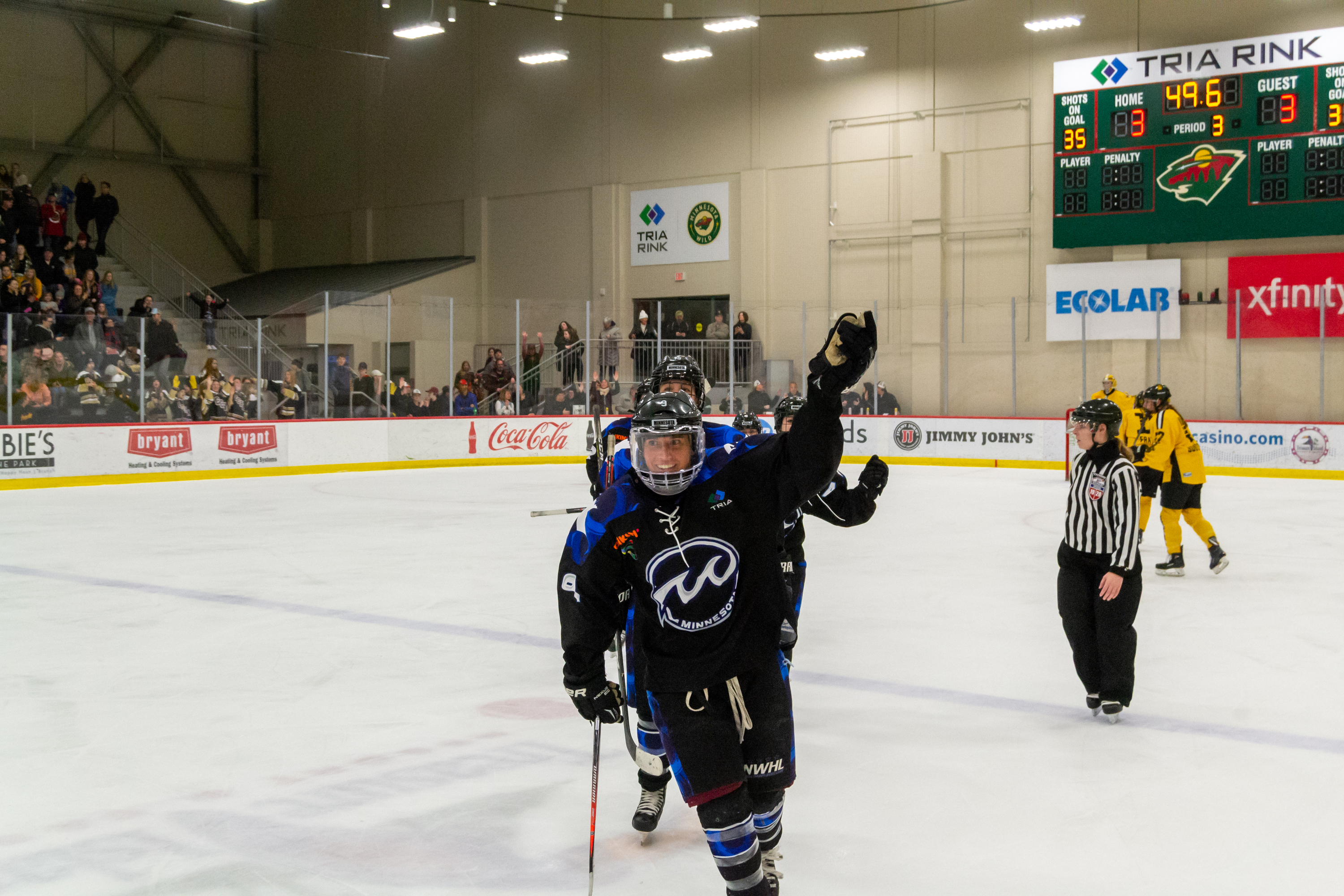 A goal in the final minute of a period is an instant momentum shifter. In one of the latest Minnesota Whitecaps games, a pair of goals about 7 seconds apart swung momentum a couple different directions.

Battling the undefeated Boston Pride, the Whitecaps saw three one-goal leads evaporate. When Boston tied it 3-3 with the goalie pulled, overtime looked to be on the horizon for the NWHL’s two best teams.

“You could just see it in her eyes off the draw, she wanted to take the lead back,” said Whitecaps defenseman Amanda Boulier. “She’s a very motivated and determined player.”

Thunstrom scored with 49.6 seconds left in regulation to put her team back on top for the eventual 4-3 victory Jan. 25 in front of a sold-out TRIA Rink in St. Paul. It ended Boston’s 19-game winning streak to hand it its first loss of the season.

On the game-winner, Thunstrom got the bouncing puck behind the Boston defense and used her speed to get some space in the offensive zone. As she drove up the side of the ice, she fired the puck over goaltender Lovisa Selander’s shoulder.

“That shot usually doesn’t work for me,” Thunstrom said. “So, today I’ll take it.” 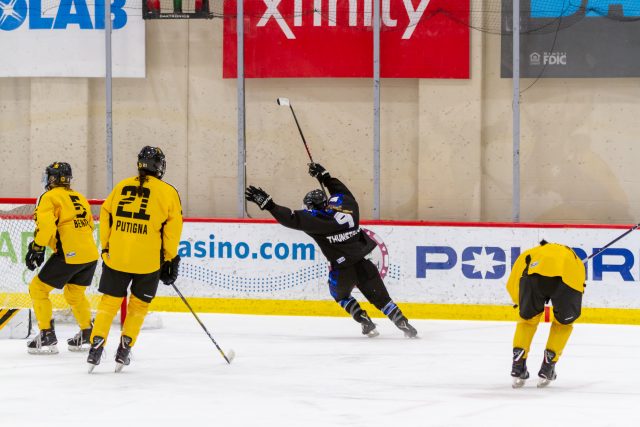 Minnesota Whitecaps forward Allie Thunstrom celebrates scoring the game winning goal with less than a minute left to defeat the Boston Pride at at TRIA Rink in St. Paul on Jan 25, 2020. (Collin Nawrocki)

It was a quick response after Boston tied the game for the third time on Jillian Dempsey’s second goal of the game off a rebound with 57.5 seconds left in regulation. Dempsey leads the National Women’s Hockey League with 36 points and 21 assists.

“It went from a not-exciting minute to a very exciting minute,” Thunstrom said. “Just a whole gamut of emotions in that last minute.”

For Thunstrom, it wasn’t just the tying goal that was deflating. A few seconds before that, she and teammate Nicole Schammel had a chance to make it 4-2 on a 2-on-1 opportunity but Thunstrom’s shot hit the post.

It was a much different end result from when the Whitecaps were swept in Boston in October by 3-1 and 5-2 margins. That was still early into the 24-game regular season. In the first meetings, the Whitecaps weren’t playing to the best of their abilities, according to goaltender Amanda Leveille.

“They’re unbelievable on the rush,” Leveille said. “They’ve scored a lot of goals on us on the rush, and I think the difference in this game was we really shut that down. We didn’t let them use their skills to their full potential.”

The Whitecaps never trailed in their latest win over Boston, taking a 1-0 lead on a Jonna Curtis goal and going up 2-1 in the second period on a short-handed goal off a breakaway. Meghan Lorence went 5-hole after getting a nice pass up ice from Schammel.

When the final horn sounded, the Whitecaps could celebrate the win and ending Boston’s perfect season.

“I think any team that’s undefeated, they’re always fun to play against,” Boulier said. “I think for those of us that were on the team last year, we kind of knew what that was like.”

The Whitecaps had a storybook inaugural season in the NWHL when they became the fifth team in the league last season. They started off with a six-game winning streak (before Boston defeated the Whitecaps in St. Paul) on their way to a 12-4 regular-season record capped with winning the Isobel Cup Championship over Buffalo in overtime in front of yet another sold-out crowd in St. Paul.

This year was a little different, starting with a different roster construction with players like Hannah Brandt, Lee Stecklein and Kendall Coyne Schofield joining the PWHPA. With some returning and fresh faces, the Whitecaps started off the year 1-2-1 and then 5-5 in their first 10 games. Since then, they’ve won 8-of-10 games, which included a five-game winning streak.

“I think lately, especially these last few weeks and after the Christmas break, we’re really jelling together,” Thunstrom said. “We’re turning into that team where you don’t know where the goals are going to come from.”

Leveille agreed that midway through the season was a bit of a turning point. They were struggling to score goals, but the scores lately – like 8-2, 7-1, 6-1 and 7-0 victories over Buffalo and Connecticut – really reflect how the Whitecaps are playing in both their defensive and offensive zones, according to Leveille. The Whitecaps are averaging about 4 goals per game with a +38 goal differential.

Those scoring abilities from leaders like Thunstrom and Curtis really help out the team a ton, Leveille said, because it gives them the mindset that they can score goals and that part of the game won’t be a problem.

“Definitely we’ve come a long way from the state of the season, especially when playing a full 60 minutes,” Leveille said. “That’s something that we struggled with early on.”

The Whitecaps had three straight January weekends of home games, outscoring opponents 34-11. Following the All-Star weekend in Boston, the Whitecaps finish the regular-season with a series in Buffalo Feb. 22-23 before the home finale against Connecticut Feb. 29 and March 1. 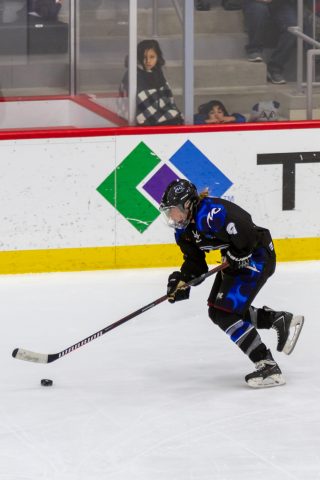 Seven Whitecaps will represent Minnesota on the All-Star rosters including Leveille, Boulier, Audra Richards on Team Packer, plus Schammel, Curtis, Lorence and Thunstrom on Team Dempsey. Lorence replaces Sydney Baldwin, who was named to the All-Star Game but is unavailable.

The Whitecaps are led by the speedy Thunstrom, who’s shattered last year’s numbers with her league-leading 19 goals and 27 points through the first 20 games this year. She scored 6 goals and 6 assists in 16 games last season. In addition to the game-winner, Thunstrom scored both Whitecaps goals in the 4-2 loss to Boston the following day. She was named VEDA Player of the Week in the NWHL.

Her linemate Curtis continues to produce for the Whitecaps for a second straight year; she has 11 goals and 25 points in 17 games so far.

Schammel leads the rookies on the team with 10 goals and 24 points in 20 games. Boulier is once again a top defender in the league with her 3 goals and team-high 20 assists in 18 games. Leveille has been the solid backstop in goal, going 13-5-2 with a .932 save percentage and 2.13 goals against average while posting three shutouts. Her latest efforts earned her NWHL Player of the Month honors for January.

It’s her efforts that have helped keep the Whitecaps in such good shape this season. They want to keep building on their recent success, watch video to try and clean up any mistakes, according to Leveille.

“Because we want to keep winning each game,” Leveille said. “And then going into playoffs, we want to be playing our best hockey. We want to be confident.”