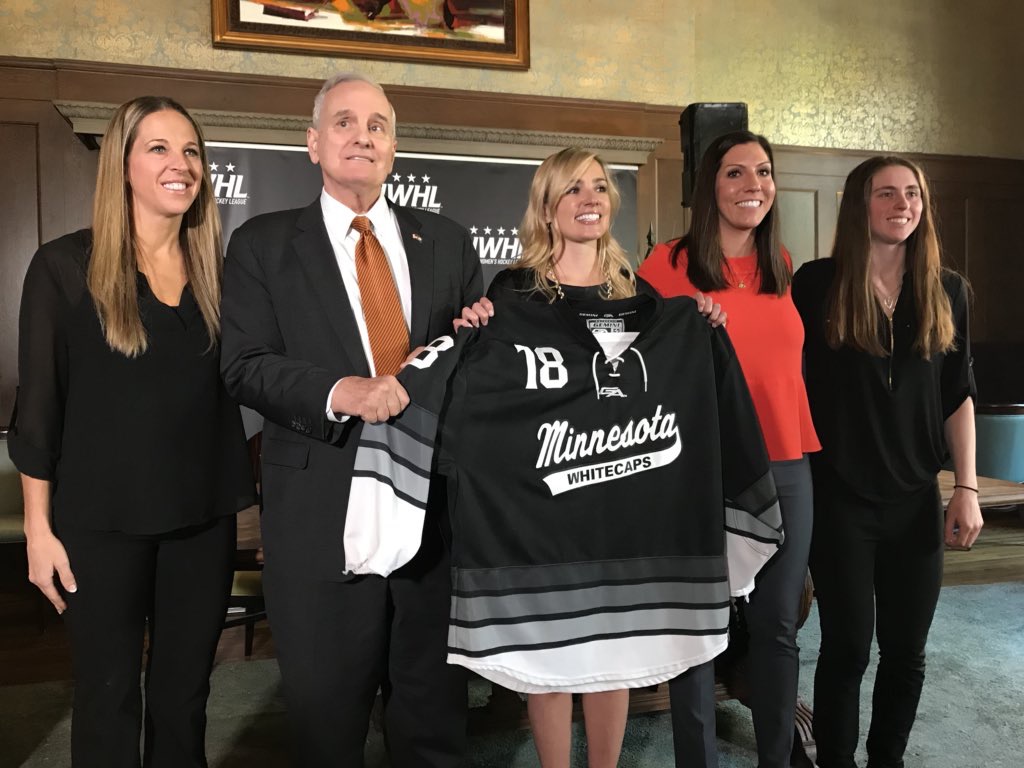 ST. PAUL — The Minnesota Whitecaps are joining the National Women’s Hockey League (NWHL), the league announced at a press conference featuring Governor Mark Dayton on Tuesday. Expansion has been teased previously, but this is the first expansion team to enter the league since it was founded in 2015.

“Make no mistake, when the league was formed in 2015, we would have loved to start with a team in Minnesota,” Commissioner and league founder Dani Rylan said. “This is the State of Hockey, and all the data shows this is where a lot of the talent exists.”

The NWHL is the US’s first paid professional league for women, but the pay doesn’t yet rise to the level of a full-time job so it’s bringing a team to the players. The Whitecaps, founded in 2004, has been purchased by the NWHL, which owns four of its five teams. The Buffalo Beauts were purchased by Terry Pegula, owner of the Buffalo Sabres and Buffalo Bills, in December 2017. The league declined to discuss the financial terms of the purchase.

The Whitecaps will begin NWHL play in the 2018-19 season at an as yet unannounced home rink. When the 2018 NWHL All-Star came to St. Paul, with the assistance of the Whitecaps and the Minnesota Wild, the game was played at the Tria Rink, the Wild’s new practice facility.

“I think it’s a huge thing for our state,” said Whitecaps captain Winny Brodt-Brown. “We have probably the most girls playing, and I think that’s just going to continue to grow. Because the girls that are playing youth hockey want to play high school. The high school players want to play collegiate. The collegiate players want to play professionally or on the national team. Players shouldn’t have to end their career at 22.”

With teams in Newark (formerly New York), Boston, Buffalo, and Hartford, teams were able to travel to weekend games by bus previously. Adding a team in Minnesota will change the complexion of the schedule and add expenses, but Rylan notes that another team and more league games will increase revenue potential. “We have a handful of investors in the league and then we have grown our revenue streams throughout the last three seasons going into our fourth season now. We’re ready to expand,” she said.

The league experienced financial hardships in the past. It cut player salaries in the middle of the second season. However, Rylan says the expansion won’t impact player salaries for the coming season, with players expected to once again make between $5,00 and $7,000 on one-year contracts. That was down from the start of the second season when former Gopher Amanda Kessel was the league’s highest-paid player at $26,000. Last year, the contract had skaters playing two preseason games, two practices per week, 16 regular season games, and up to two postseason games.

The Whitecaps may play more than other teams, as it already has four exhibitions scheduled against WCHA opponents.

Though the Wild and Vikings Women helped with the 2018 NWHL All-Star Game in St. Paul, there is no deal currently in place for the Wild to aid the Whitecaps. Rylan said the Wild have been “great friends and advisors” so far and she hopes the relationship will continue to grow. If the Wild got involved, it wouldn’t be the first NHL team partnering with an NWHL club. The league has a “strategic alliance” between the Metropolitan Riveters and the New Jersey Devils, in addition to having the Pegulas own one of the teams. “[The Pegulas] are building the blueprint for us as to what it means for an NHL club to own an NWHL club,” Rylan said. “That knowledge and that blueprint is going to be extremely valuable as we continue our conversations with the Wild or continue conversations with new markets.”

Rylan compared the Whitecaps’ potential for immediate success to that of the Las Vegas Golden Knights. The Whitecaps aren’t starting from scratch, but the team could immediately compete for the Isobel Cup with the wealth of talent available in Minnesota and surrounding areas. To boot, there’s no competition for local players who want to stay in the area and have the opportunity to play high-level competition. The state has five Division 1 women’s hockey programs and the Badgers aren’t far away. The US Olympic team featured six Minnesotans, 14 players from the WCHA, and five players who came to the national team from the Whitecaps, only one of which was originally from Minnesota. Rylan even noted there are Minnesotans in the league’s original four teams that have expressed interest in returning to the State of Hockey to continue their NWHL career.

Brodt-Brown has high hopes for what joining the NWHL can do for the Whitecaps and girl’s hockey in Minnesota. “We had a pretty good presence, but when you’re always playing for something it means a lot more,” she said. “Even when you’re playing U10 and playing for a championship, something’s on the line.”