Whitecaps prepare for Whale of a game

NWHL to crown a champion this weekend on national TV 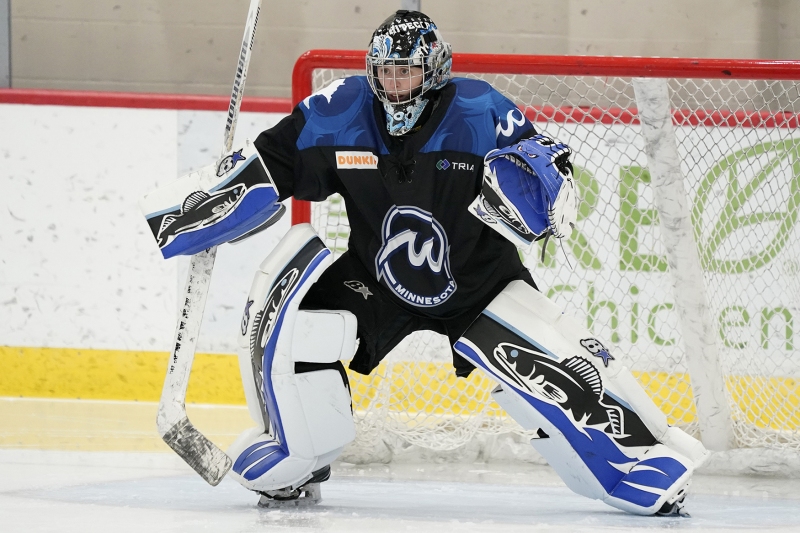 Amanda Leveille will once again be the last line of defense as the Whitecaps strive for back-to-back Isobel Cups. (MHM Photo / Rick Olson)

The last time the Minnesota Whitecaps played a semifinal game in the Isobel Cup Playoffs, it was one of the last sporting events in a pre-pandemic world. Fans packed TRIA Rink in St. Paul on March 8, 2020 – International Women’s Day – to see the Metropolitan Riveters take on the defending-champion Whitecaps.

A tight, physical game was scoreless at the end of regulation. But 6:39 into overtime, Allie Thunstrom gave her team a 1-0 victory and a trip to Boston for the championship game scheduled for the next week.

“Their D pinched and I was able to chip it around and then we ended up on that odd-man rush,” Thunstrom said. “I passed it across to Jonna (Curtis) and then she made a nice play back. And it was something we’ve been looking for all game, and there it was in overtime.”

Of course, that next game never happened because of the pandemic. The National Women’s Hockey League returned to play January in Lake Placid for a bubble-type situation. But positive COVID-19 tests ended play early. The NWHL is back this weekend at the Boston Pride’s home rink for two semifinal games and a championship to finally crown an Isobel Cup champion.

The Whitecaps are the No. 2 seed and will face the 3-seed Connecticut Whale Friday night following the 1-seed Toronto v. 4-seed Boston game at 4 p.m. Central time with the winners meeting at 6 p.m. Central Saturday night.

The games this weekend will be broadcast on NBCSN, marking the first women’s professional hockey league championship games that will air on a major national network in the United States.

“Just because when I started playing hockey when I was 4 with all the boys, and then growing up playing until I was 17 years old, I never thought that playing on national TV would ever even be a possibility,” said 43-year-old Brodt Brown.

The Whitecaps practiced regularly for the past couple of weeks. In addition, the coaching staff told the players to keep in shape on their own with individual workouts.

They’re confident everyone is healthy and ready to go. But they’ll also be without two of their top four defensemen on the trip: Sydney Baldwin (1-2—3 in Lake Placid) and Emma Stauber. Amanda Boulier is added to the roster, however.

Stauber will be occupied with another hockey game this weekend. She’s the head coach of the Proctor/Hermantown girls’ hockey team that qualified for the Class 1A girls’ state high school hockey tournament at Xcel Energy Center with quarterfinals Friday and Saturday.

The Whitecaps went 3-1 in the bubble games this winter, losing to the league’s new team this year, Toronto. The Whale and Whitecaps did not face each other, although a game was originally scheduled but wasn’t played because of COVID-19 cases. 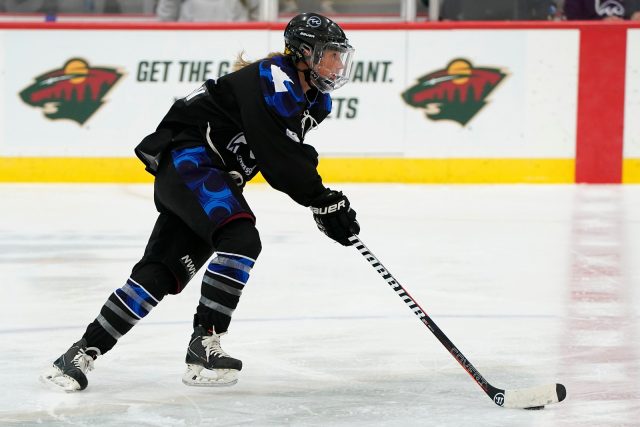 Speedster Allie Thunstrom looks to lead the Whitecaps to another NWHL title this weekend in Boston. (MHM Photo / Rick Olson)

“Because you just go out there and you just play and you don’t overthink it,” Brodt Brown said. “I think as a player, it’s kind of fun playing an opponent you haven’t played before. Everyone’s going to be playing their best, and it’s going to be an intense game.”

One of the newcomers who showed off her skills this year was defenseman Maddie Rowe. She leads the team, and it’s not close, this season with 19 blocked shots.

“She just is always very positive, brings a lot of energy to our team and gets everyone around her pumped up,” Brodt Brown said.

Nina Rodgers leads the team with 6 points, which includes a pair of power-play goals and four assists. Audra Richards (1-3—4) and Meghan Lorence (0-4—4) follow with four points each. Newcomer Haley Mack left a mark as a rookie in Lake Placid, scored a pair of goals and an assist.

Getting some scoring from a few new names was helpful for the Whitecaps. The pair of Curtis and Thunstrom have been the team’s go-to top scorers since the team joined the NWHL in 2018-19. Thunstrom led the league in goals last season with 24 and was the league’s co-MVP. But this year, Curtis had one goal in four games while Thunstrom hasn’t registered a point.

Whitecaps coach Jack Brodt called it surprising that the team received scoring from all over the roster while top goal scorers Curtis and Thunstrom were shut down in that category.

“But their presence on the ice and the hard work that they do in the defensive zone is very important,” Brodt said. “If we get into a run-and-gun game, we’re probably going to lose that game. We’ve had more success where we’ve kept the scores down rather than elevating the scores.”

Two other goal scorers for the Whitecaps this season? Brooke White-Lancette and Brodt Brown, who have been Whitecaps players from the very beginning.

In goal, Amanda Leveille will take her usual spot with her calm and collective demeanor.

Brodt Brown often refers to Leveille as a “gamer,” and this week called her the team MVP since she’s a competitor in every game.

“With her back there, we’re confident,” Brodt Brown said. “We’ve just got to help her out as much as we can and let her do her thing.”