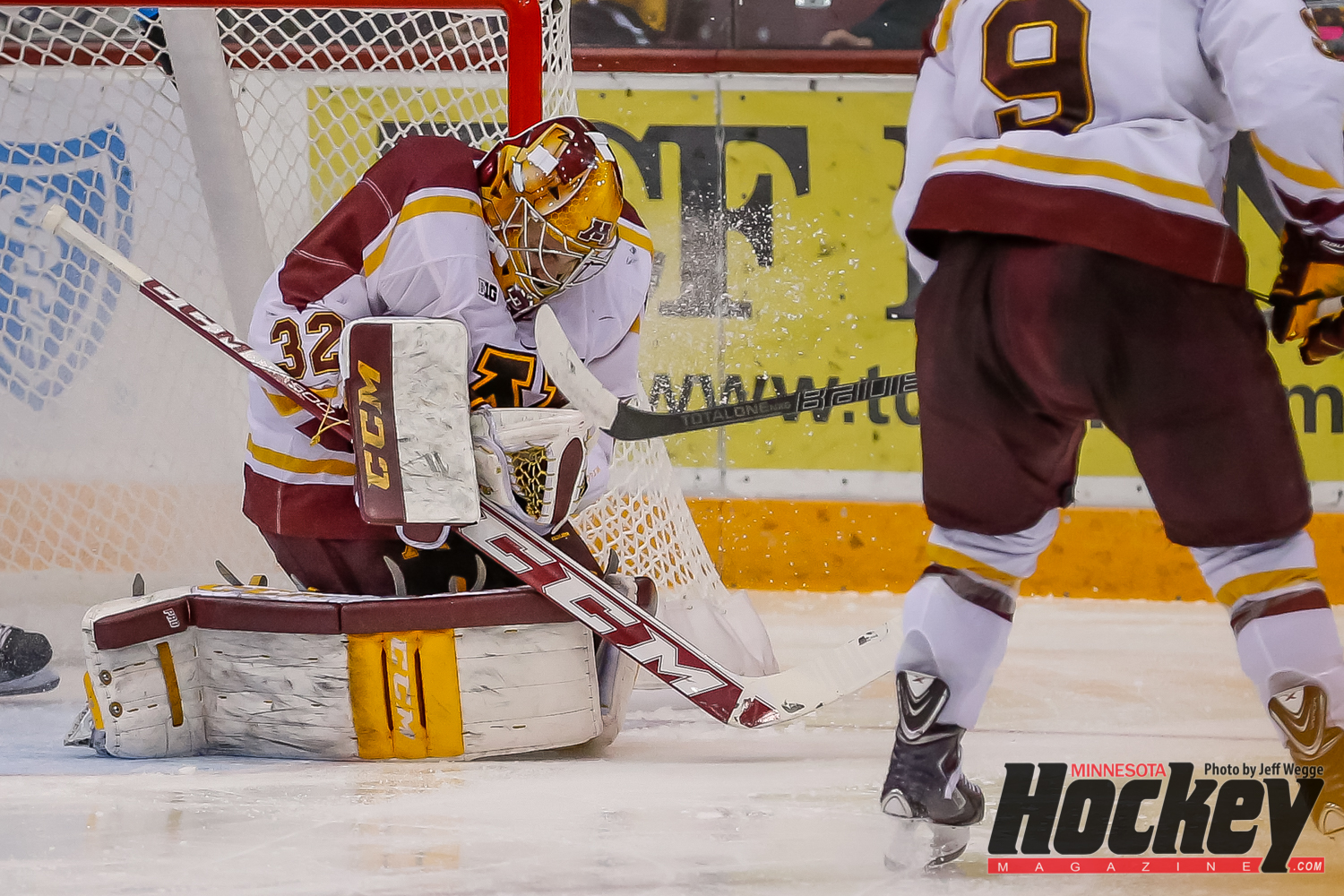 Adam Wilcox wasn’t named the Big Ten Goalie of the Year this season, but he sure played like one Friday afternoon. The junior goalie stopped all 39 Ohio State shots as Minnesota (22-12-3) advanced to the Big Ten Tournament Championship game with a 3-0 win over Ohio State (14-19-3) at Joe Louis Arena.

“It was one of those nights where you look at your goaltender and say I don’t think they’re going to score one tonight,” said Minnesota coach Don Lucia. “That’s how it ended up.”

The performance gave Wilcox’s his 13th career shutout, tying him with Kellen Briggs in the Minnesota record books.

“Creating the goal for 13 seemed like a while away,” said Wilcox. “But when you have a good defensive core and good team every year, you get opportunities to get shutouts. I thought it was a great way to get it. Anytime you can get a shutout in playoffs it’s a great feeling–getting something like [the record] was pretty cool too.”

The Gophers didn’t make things easy on their goaltender despite drawing two early power play opportunities in the first period. The Buckeyes generated the better scoring opportunities and had numerous opportunities on the rush. However each time Ohio State generated a quality chance, Wilcox was able to square himself, make the save, and control his rebounds.

Lucia felt his team played tight early knowing how important a win was for an NCAA tournament bid and that the first goal of the game was a big one. Minnesota’s senior class has led the team over the last 14 games, as their 32 goals have accounted for 55 percent of the teams output. They added another to their total midway through the second period. Seth Ambroz won a board battle in the right wing corner forcing the dumped in puck up the wall to Travis Boyd. Boyd found his linemate Sam Warning coming late into the zone, touched the puck over and Warning beat the goalie high glove for his 12th goal of the season at 7:51.

“Give a lot of credit to Ambroz who chipped in, and then Boyd made a good play,” said Warning. “All I had to do was shoot it.”

The Gophers added to their lead 10:45 into the third period. Ben Marshall came down the left wing, fired a wrist shot towards goal. As the puck deflected off an Ohio State defenseman’s skate, Vinni Lettieri beat his check to the net and helped the puck over the goal line for his ninth goal of the season.

Ohio State pulled their goalie with over four minutes to go for a late 6 on 4 advantage, but the Gophers quickly got the puck off the ensuing face off and Boyd fired it 170 feet for an empty netter at 15:40, his 17th goal of the season.

The win pushed Minnesota to ninth in the PairWise Ranking, putting them in decent shape for a bid to the NCAA tournament. However, with so many games left in conference tournaments Lucia didn’t think they had alleviated the pressure yet.

The Big Ten championship game is set for 7 p.m. CT on Saturday televised live on the Big Ten Network and streamed on BTN2Go. The game will also be available on the radio via 1500 ESPN and the Gopher Radio Network.