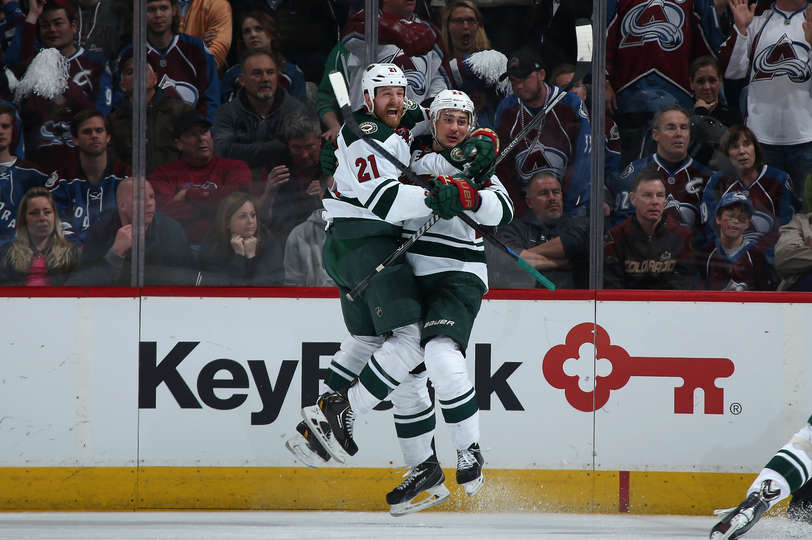 Nino Niederreiter #22 of the Minnesota Wild celebrates his game winning goal with Kyle Brodziak #21 of the Minnesota Wild in overtime against the Colorado Avalanche in Game Seven of the First Round of the 2014 NHL Stanley Cup Playoffs at Pepsi Center on April 30, 2014 in Denver, Colorado. The Wild defeated the Avalanche 5-4 in overtime to win the series. (Photo by Doug Pensinger/Getty Images)

For the second time in 11 years, the Minnesota Wild pulled off what appeared to be the impossible on Wednesday night in the hostile environment that is Denver’s Pepsi Center. Trailing by a goal with time running out in Game 7, the Wild tied the game late and defeated the Colorado Avalanche 5-4 on Nino Niederreiter’s second of the game 5:02 into overtime.

Like Andrew Brunette’s memorable goal in 2003, Niederreiter’s overtime tally vaults the Wild past the Avalanche and into the second round of the Stanley Cup Playoffs. Minnesota advances to face the Chicago Blackhawks in the postseason for the second consecutive year beginning on Friday night at the United Center.

Here’s the schedule as it is known at this time:

Niederreiter’s goal gave Minnesota its first and only lead of the night after the Wild battled back from four one-goal deficits in regulation. Interestingly enough, the last team to win a seventh game in overtime without having led in regulation was the 2003 Minnesota Wild.

The winning sequence was initiated by Dany Heatley’s perfect outlet pass to Kyle Brodziak in the neutral zone creating a 2-on-1 with Niederreiter against Avs defenseman Andre Benoit. Brodziak slipped the puck to Niederreiter as they crossed the Colorado line and, when Benoit shaded toward Brodziak, El Nino ripped a shot past Colorado goaltender Semyon Varlamov’s head and the Minnesota bench erupted.

That the trio combined to net the game winner was appropriate considering that line conspired to finish with nine points in the team’s most important game of the season. Niederreiter had a part in Minnesota’s final three goals and finished with two goals and an assist while Heatley (goal, two assists) and Brodziak (three assist) each had three-point nights of their own.

The overtime heroics would not have been possible had Niederreiter not set up Jared Spurgeon’s tying goal with just 2:17 remaining in regulation.

Having beaten Jan Hejda to the puck behind the Avalanche net, Niederreiter easily spun off the Avs defenseman and fed Spurgeon in the right circle who patiently waited for a diving Nathan MacKinnon to slide by before beating Varlamov with a wrist shot just inside the far post.

Spurgeon’s patience in an urgent situation was the key to the Wild sending this game into overtime.

Ilya Bryzgalov received credit for the win despite being called upon to make just one save in 13:15 of action. Bryzgalov replaced starting goaltender Darcy Kuemper with 8:44 to play in regulation after Minnesota native, and former Gopher, Erik Johnson’s goal put the Avs up 4-3.

Kuemper, who had been injured earlier in the game and remained in the crease, headed straight to the dressing room and was replaced on the bench by John Curry.

Of course this series would not be what it was without some sort of officiating debacle and the striped shirts wasted little time attracting the spotlight once again. Nick Holden’s goal for Colorado at 2:52 of the first period with Jamie McGinn in the crease, pinning Kuemper to the right post, appeared to have initially been waved off.

But the NHL’s Situation Room reported later that the officials’ arm wave was a signal the puck had not been touched with a high stick. However, nothing was offered as to why McGinn was allowed to obstruct Kuemper in the crease as was the consensus throughout the Twittersphere.