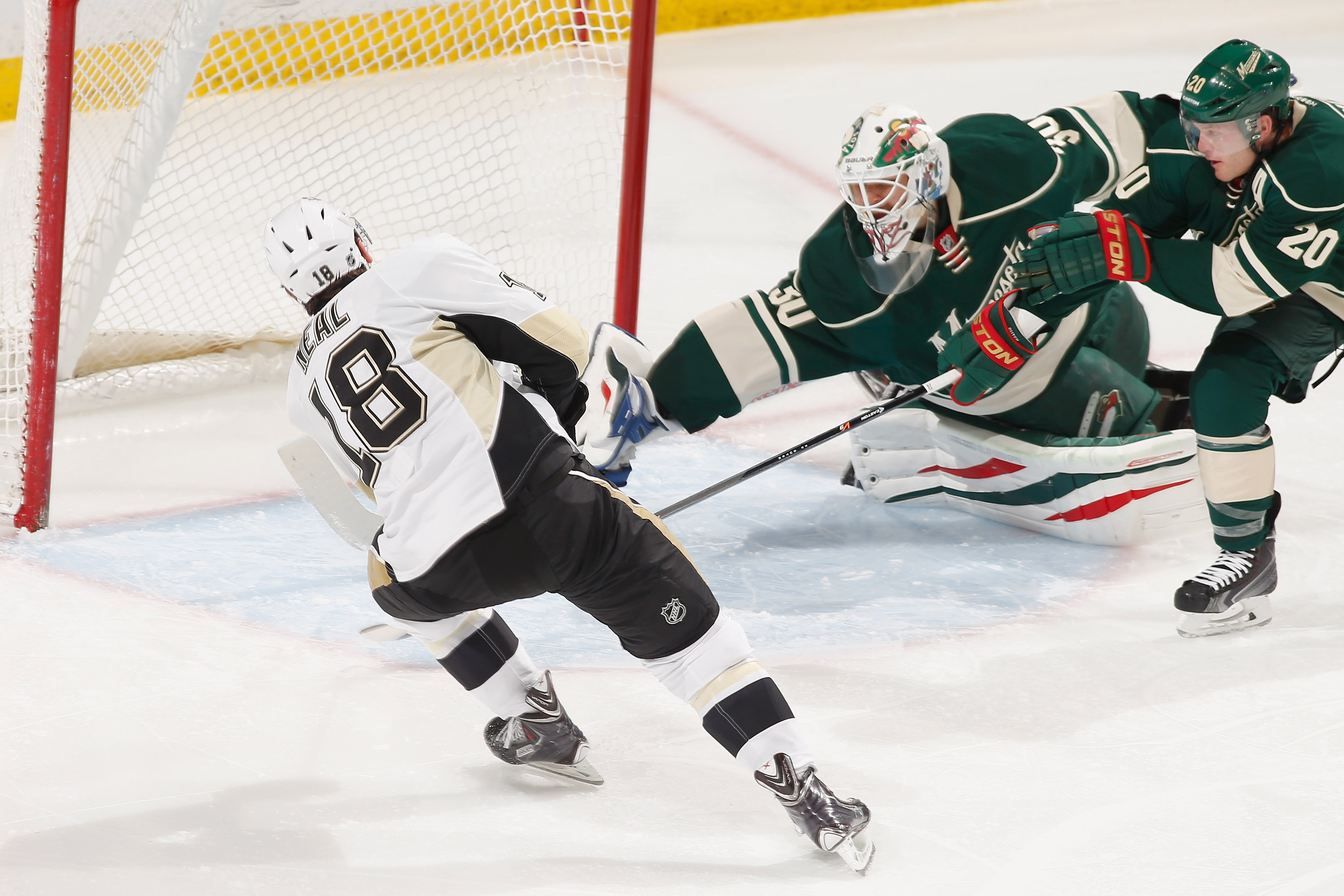 Goalie Ilya Bryzgalov #30 of the Minnesota Wild makes a stick save against James Neal #18 of the Pittsburgh Penguins during the game on April 5, 2014 at the Xcel Energy Center in St. Paul, Minnesota. (Photo by Bruce Kluckhohn/NHLI via Getty Images)

SAINT PAUL — The Minnesota Wild took another step toward securing its spot in the Stanley Cup Playoffs with a 4-0 over Sidney Crosby and the Pittsburgh Penguins on Saturday night in front of 19,409, the largest crowd ever to witness a Wild game at Xcel Energy Center.

Secondary scoring was the story of the night against an injury-ravaged Penguins team destined for the second seed in the Eastern Conference behind the Boston Bruins.
The fourth-line tandem of Cody McCormick and Stephane Veilleux each scored—with McCormick adding an assist—and Erik Haula potted what turned out to be the game a winner early in the opening period.
McCormick, a healthy scratch in five of the past seven games, was more than happy to contribute to the win.

“When you’re sitting out you’re making sure you’re doing what you can to get back in the lineup and contribute,” said McCormick. “You don’t pout, you know the opportunity will come and you just have to make sure you’re ready for it.”

Ilya Bryzgalov backstopped the win with 20 saves to earn his 33rd career shutout. Despite a light workload, Bryzgalov was brilliant when called upon.

The veteran netminder made a spectacular stick paddle save denying James Neal’s attempt at a wide-open net 2:15 into the second and closed the door on Lee Stempniak with his right pad nearly three minutes later.

“I thought we came out and we were pretty good defensively but [Pittsburgh] had a bit of a push right from the start,” Minnesota coach Mike Yeo said. “They had some shots but he just settled everything right down.

“He looked so calm and in control and the team definitely feeds off that.”

Bryzgalov said playing with a big lead was “nice” and drenched his teammates in accolades.

“I think not only the good lead in the first period, the whole game the team was playing unbelievable,” Bryzgalov said. “They did a tremendous job, they limit their best players’ time and space and it helps a lot.”

The Penguins’ Jeff Zatkoff allowed four goals on 20 shots after stopping 24 of 26 in a Dec. 19 5-2 win for the Penguins over Minnesota in Pittsburgh.

Haula scored his fifth goal of the season less than two minutes into the contest giving him each of the last two Wild goals to that point after scoring the tying goal late in Thursday’s shootout loss to Chicago.

Matt Moulson chipped the puck from the neutral zone up and over Pittsburgh defenseman Robert Bortuzzo where it was picked up by the speedy Haula who wacked the bouncing puck behind Zatkoff at 1:42.

The Wild doubled the lead at the 8:47 mark of the first on an odd-man rush by Koivu and Zach Parise courtesy of a heady play by the latter.

Koivu carried puck into the Penguins’ zone and as Parise made a bee-line to the net—drawing a defender with him—the Wild captain cut left to the middle of the slot and fired through the Parise-created screen for his 11th of the season.

But Minnesota wasn’t finished as Veilluex, playing just his 31st game of the season in a Wild uniform, got into the act with a little help from McCormick. 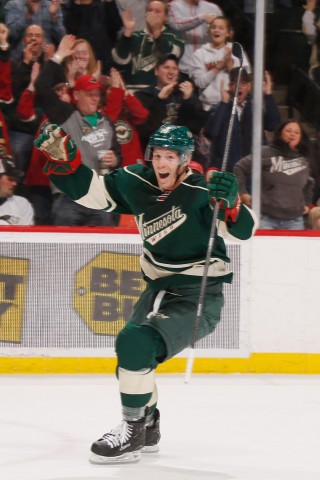 Stephane Veilleux #19 of the Minnesota Wild celebrates after scoring a goal against the Pittsburgh Penguins during the game on April 5, 2014 at the Xcel Energy Center in St. Paul, Minnesota. (Photo by Bruce Kluckhohn/NHLI via Getty Images)

A Veilleux forecheck deep in the Pittsburgh zone forced Penguins’ defenseman Brooks Orpik to give the puck up to defensive partner Paul Martin who promptly coughed it up to McCormick along the left side boards. Veilleux, meanwhile, headed straight for the front of the net, received McCormick’s pass and buried goal No. 3 on the year with 5:04 to go in the period.

Yeo liked the physical, defensive identity his fourth line brought to the table against the Penguins.

“That’s the way that we prefer for them to defend,” Yeo said. “We want them to bring momentum by playing in the offensive zone, getting on the forecheck and, obviously, factoring into the scoresheet offensively is big.”

McCormick capped off the scoring at 6:24 of the second at the tail end of a long shift which found him in the rare situation of sharing the ice with Parise. McCormick made the most of it, one-timing a Parise pass behind Zatkoff to complete his sixth career multi-point game.

“I think it started with Charlie (Coyle) and Zach,” McCormick said. “Charlie took a pretty hard hit on the wall but he got it in and then Zach found me in a good spot. I was able to just put it behind him.”

The goal is MCCormick’s first as a member of the Wild and first since scoring for the Buffalo Sabres on Nov. 8, 2013 at San Jose. With his two assists on the night, Parise eclipses the 500 point barrier (240-261–501) for his career.