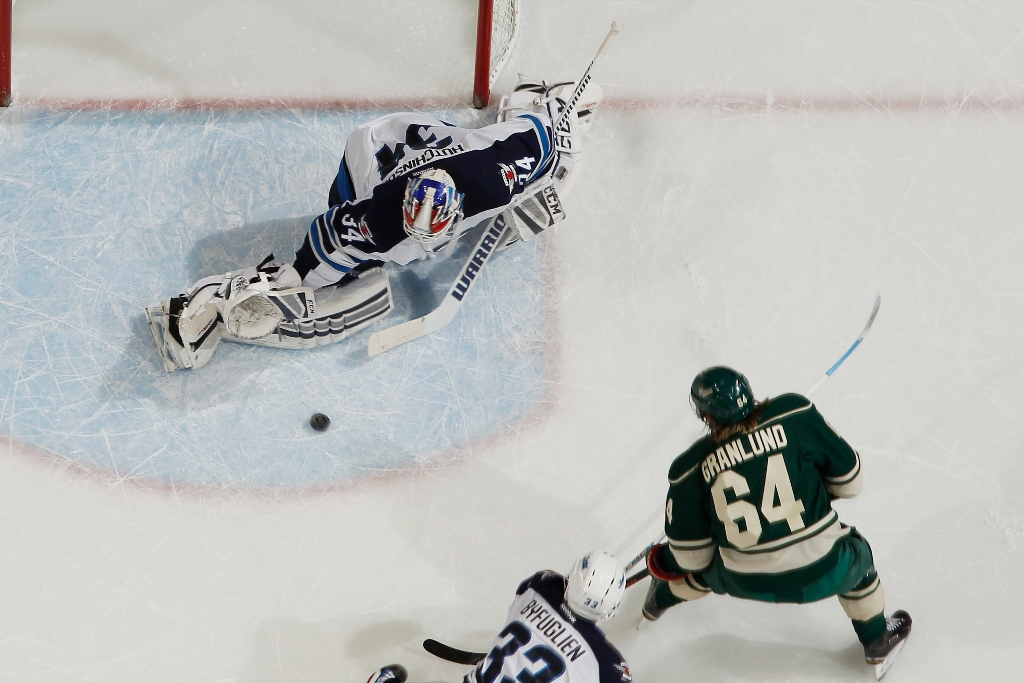 SAINT PAUL – It was that darn stanchion. Again.

For the second time since April, a stanchion played a role in an overtime Minnesota Wild losing effort, summing up a night – and possibly a season – where Murphy’s Law seems to be in place for the Wild.

Playing with an emergency goaltender, falling behind twice and losing two key players in the third period, the Wild, were able to earn a point in a 4-3 loss to Winnipeg in front of a season-high 19,177 fans. Unfortunately, Minnesota was looking for two with one of its better efforts in December.

Andrew Ladd’s shot 2:47 into overtime went off the glass stanchion behind emergency Wild goaltender John Curry, off his back and into the back of the net for the winner.

“I thought we generated a good amount of chances,” Wild coach Mike Yeo said about his team’s fifth straight loss. “Doing a lot of things, I know we limited the scoring chances against to a real solid number. For a team that needs results, it’s easy to sit here and paint a positive picture … and this was a step in the right direction, but no question do we need to win games.”

Minnesota entered a critical two game home-and-home series with Winnipeg on a four game losing streak and eight points behind the Jets, which are in the first Wild Card spot, in the Central standings. Win both in regulation and the deficit is a reasonable four. (Winnipeg has played three more games than the Wild.) 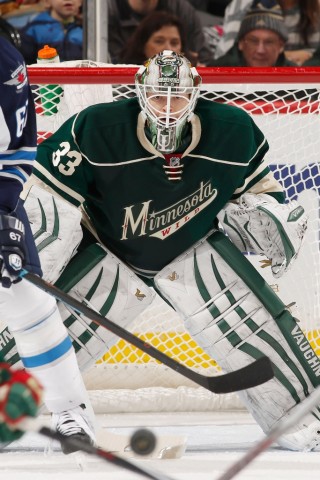 John Curry played in an emergency role for the Minnesota Wild in place of an ill Niklas Backstrom in the Wild’s 4-3 OT loss to the Winnipeg Jets December 27, 2014 at the Xcel Energy Center in St. Paul, Minnesota. (Photo by Bruce Kluckhohn/NHLI via Getty Images)

Yeo’s team also faced the Jets with Jason Zucker and both his goaltenders – Darcy Kuemper and Niklas Backstrom – sidelined because of illness. Kuemper, who missed two games earlier in the month with another illness, served as backup instead. In his place was Curry.

The Shorewood, MN native, who has a .917 save percentage in 13 games with Iowa (AHL) and six NHL appearances since 2008,  was playing his second game in two nights; having made 38 saves backstopping  the Iowa Wild to a 2-1 win Friday over Rockford. He didn’t know whether he would start when he came to the rink Saturday afternoon. He wasn’t listed on Minnesota’s pregame line sheet.

Curry played well despite the uncertainty, stopping his first ten shots and making 19 saves in a losing effort.

“It’s a bad bounce, but I know what this team has come through. They’ve had their struggles,” he said about the way the game ended. “I thought we played well tonight. We deserved to win that game.

“I just wish I could have made one more of those saves.”

Mikael Granlund gave Minnesota a 1-0 lead with his first goal since Nov. 28. The Finnish forward began a give and go with Jason Pominville and beat Jets goaltender Michael Hutchinson to put the Wild ahead with 3:57 remaining in the first.

He wasn’t able to finish the game, however. Granlund, along with Minnesota defenseman Jonas Brodin, both left in the third period with upper body injuries that will have them out of Monday’s game, according to Yeo.

Brodin was hit entering the Winnipeg zone with 17 minutes left. Granlund was thrown into the boards later in the period by Dustin Byfuglien, setting up a Wild power play that he didn’t participate.

Bryan Little tied the game 7:17 into the second period. Zach Parise thought he had given the Wild the lead a minute after Little’s goal, but the potential go-ahead goal was waved off due to goaltender interference. Although Minnesota had several more chances in front of the net and on breakaways, it wasn’t able to convert. 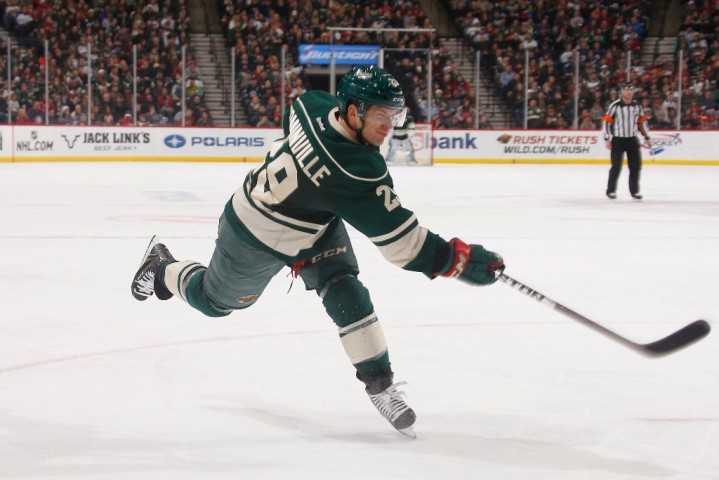 Minnesota Wild F Jason Pominville ties the game at 2-2 with a third-period goal against the Winnipeg Jets during the game on December 27, 2014 at the Xcel Energy Center in St. Paul, Minnesota. The Jets went on to defeat the Wild 4-3 in overtime. (Photo by Bruce Kluckhohn/NHLI via Getty Images)

Pominville tied the game nine minutes later to begin a sequence of three goals in 123 seconds with two ex-Gophers each scoring on the same power play. Blake Wheeler beat Curry on a two-on-one shorthanded break with Evander Kane to give Winnipeg a 3-2 lead. 32 seconds later Thomas Vanek tipped Jared Spurgeon’s shot past Hutchinson, who made 22 saves, to keep the score and dueling “Let’s Go Wild” and “Go Jets Go” chants even.

“I like being in the middle of the ice there and Spurge(on) made a great shot pass there. I feel like I had some good tips today. Finally one went in,” said Vanek.

The same can be said for the Jets. Games can’t end in ties in the NHL. Someone has to win – a feeling the Wild understand, having lost three overtime games in a four game homestand – yet that doesn’t make losing one with a bounce the way it did any easier.

“It is hard to take when you lose. We need results. We lost the game again, that’s the bottom line,” said Parise. “We did some things okay. We did some other things not great. We have to snap out of it. That’s a team we’re chasing and we needed to get that win.”

Now the Wild will go back to Winnipeg to where the bounces hope to even out – Yeo and no one in the locker room are making excuses – even if that’s not the way things have gone on and off the ice.

“It’s a team ahead of us. They’re playing good hockey, they’re playing a good team game and I thought for the most part we played well. We just didn’t get the two points,” Vanek said. “We’ll play them in two days and we’ll try to get two points.”

-Despite the injury, Granlund earned his 10th career multi-point game with an assist on Pominville’s goal. His own goal was the first of 2014-15 not against the Dallas Stars.

-Stu Bickel also picked up his first assist in a Wild sweater.