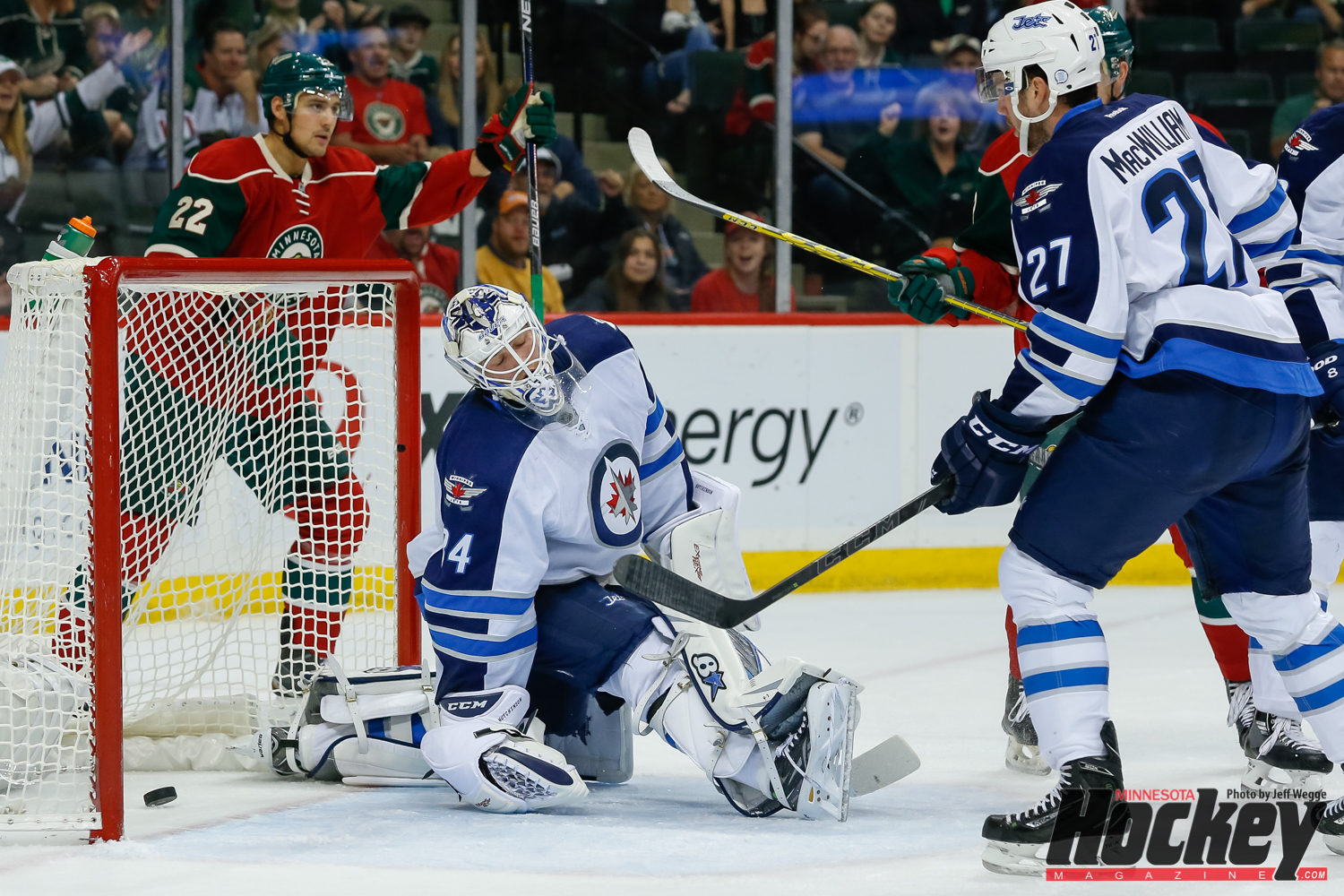 SAINT PAUL—Just hours after the Minnesota Vikings dispatched the San Diego Chargers in Minneapolis, the Minnesota Wild put up a football score on the Winnipeg Jets in St. Paul.

The Wild stormed out to a 4-0 first period lead on its way to a 8-1 win over the Winnipeg Jets on Sunday night at Xcel Energy Center. Six different players lit the lamp for Minnesota against a prospect-heavy Winnipeg lineup as the Wild raised its preseason record to 3-2.

Matt Dumba scored twice and added a pair of assists while Nino Niederreiter chipped in three points of his own (1-2—3). In just his second start of the preseason, Wild goaltender Devan Dubnyk did not see much critical action in stopping 18 of the 19 shots he faced against a Jets team missing the likes of Blake Wheeler, Dustin Byfuglien and Bryan Little.

All nine of the game’s goals were scored at even strength as the Jets (0-4) and Wild (0-5) each came up empty on the power play.

Minnesota coach Mike Yeo said it was hard to find too much to complain about in his team’s fifth preseason game and pointed to the team’s offensive zone net play as something that carried over from the second half of last year into this game.

“[Directly resulted in] a lot of goals for us tonight,” Yeo said. “It’s good to see that kind of where it was when we left off at the end of the year.” 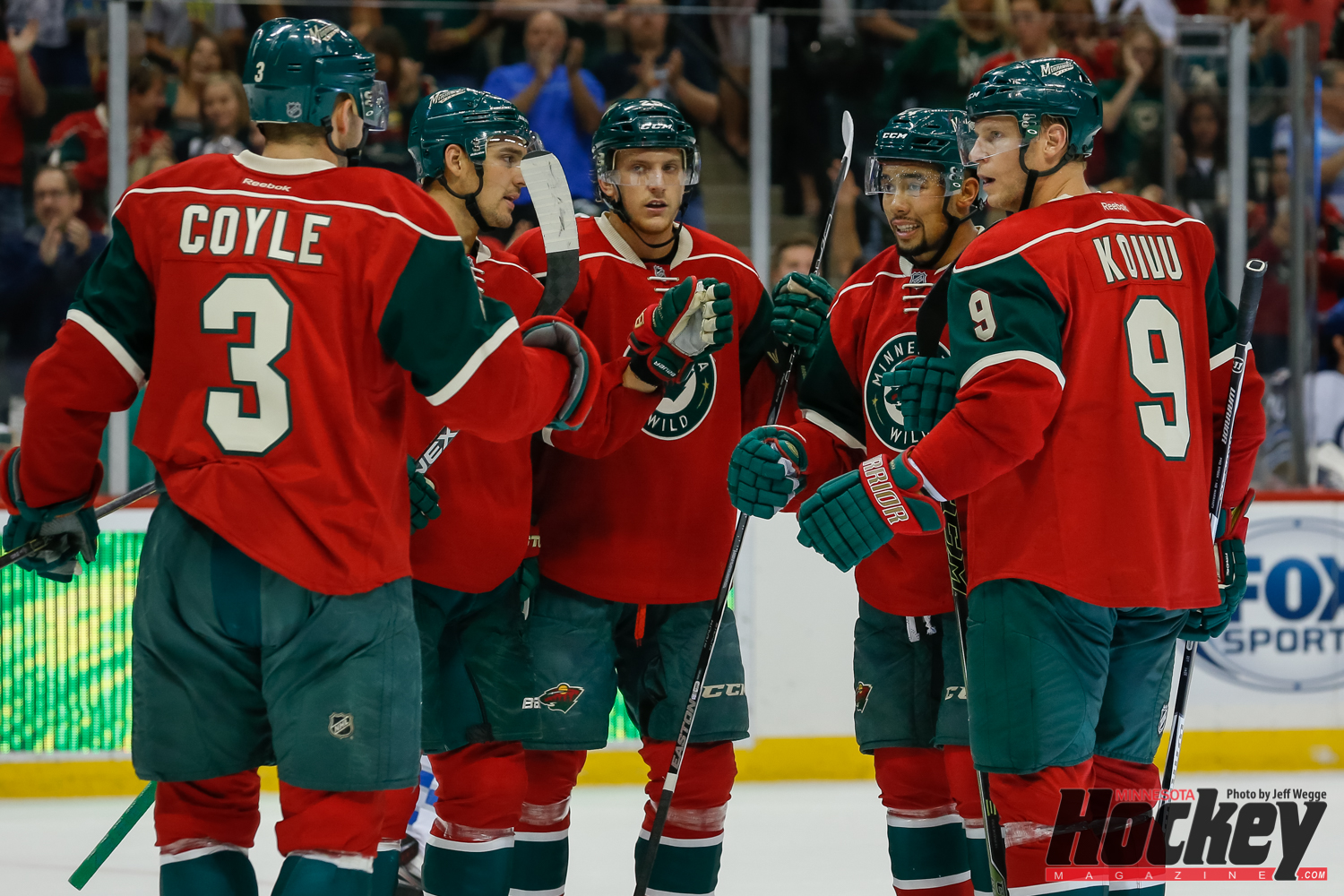 The defensive tandem of pairing of Dumba and Jonas Brodin combined for six points (3-3–6) and finished the game a collective plus-9 with Dumba alone a plus-6.

“I love playing with Brods, we’re best of friends and we kind of know what each other is thinking out there,” Dumba said. “We know each other’s game pretty good.”

“That pairing has been very good through the scrimmages when they were together,” Yeo said. “Those guys seem to have some chemistry together and certainly they’ve been very dangerous all through camp in the offensive zone.”

Dumba said tonight’s game was the best he had felt on the ice all preseason and he credited that to the ability to get back to his game-day routine.

“You get your nap in, you’re doing everything the way it goes on game days,” Dumba said. “I think that really helped me mentally be prepared for tonight’s game.”

Niederreiter got Minnesota on the board just 3:27 into the contest when Mikko Koivu’s shot from just inside the blue line ricocheted off of him and behind Jets goalie Michael Hutchinson.

“I feel like that’s my bread and butter right in front of the net,” Niederreiter said, “Obviously it’s not always pretty, you get shots on you or you get some slashes and all that stuff.”

Winnipeg’s undermanned traveling contingent managed to the Wild at bay for the next 6:41 which turned out be Minnesota’s longest scoring drought until after Dumba scored the Wild’s seventh goal at 14:01 of the second.

Goals by Charlie Coyle, Mikael Granlund and Dumba in the latter half of the opening period extended the lead to four before Mikko Koivu made it 5-0 just 4:29 into the second.

Koivu, who in addition to his two points was a plus-3 and won 13 of 18 faceoffs (72 percent) is having an outstanding training camp according to Yeo.

“In my time here this is as good of a camp that I’ve seen [Koivu] have,” Yeo said. “He’s been real motivated every day and just kind of helping those kids along, which is huge.”

Penalties by Granlund and Nate Prosser 20 seconds apart just past the six minute mark of the second gave Winnipeg an opportunity to get back in the game. But the Jets failed to register a shot in the entire 2:20 man advantage, including a full two minute 5-on-3.

Zach Parise made it 6-0 midway through the second before Dumba added the extra point on a slapper from the left point at 14:01. The teams traded goals by Jonas Brodin and Mathieu Perreault in a third period which deteriorated into a brawlfest before it was over.