Wild can’t help but do it the hard way

Path of least resistance proves elusive to Minnesota yet again 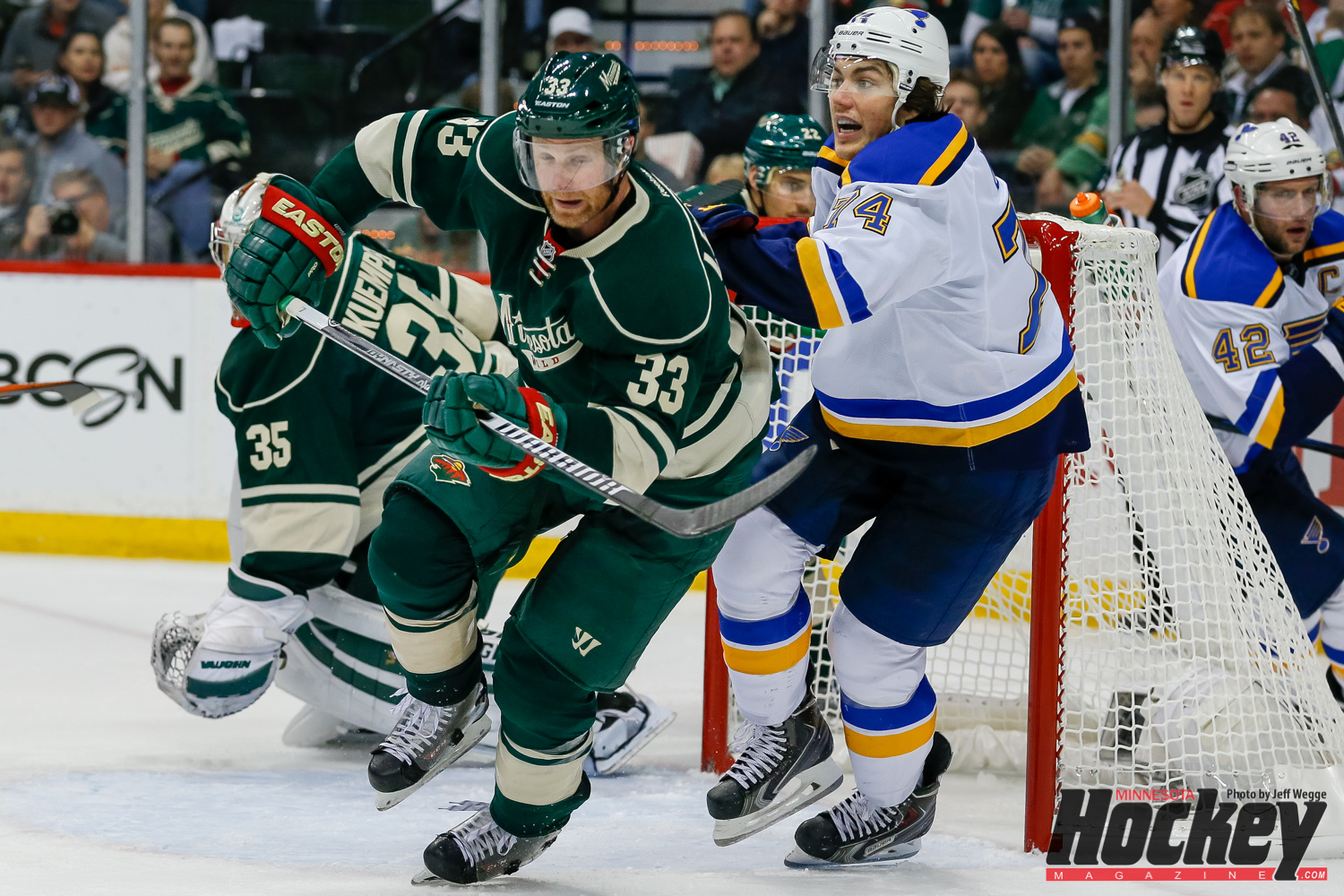 Minnesota defenseman Jordan Leopold (33) fights his way toward the puck with St. Louis forwards T.J. Oshie (74) and David Backes (42) in pursuit in the Blues’ 6-1 win over the Wild on Wednesday night at Xcel Energy Center. (MHM Photo / Jeff Wegge)

Path of least resistance proves elusive to Minnesota yet again

Anyone who has followed the Minnesota Wild for any period of time knows there to be one common theme throughout its brief history. Players may change, coaching staffs may change, ownership may change and heck, even the scoreboard may change, but this franchise never makes it easy on itself.

With an opportunity to put a stranglehold on its Stanley Cup Playoff first-round series with St. Louis on Wednesday night, Minnesota was outplayed in every facet of the game in a miserable 6-1 Game 4 loss to the Blues.

Instead of 3-1 lead and a chance to close out the series in St. Louis on Friday, the Wild hits the road with the potential to face elimination upon their return to Xcel Energy Center on Sunday.

“It’s obviously frustrating not to be up 3-1; we had that opportunity tonight,” Minnesota coach Mike Yeo said. “But it’s a pretty darn good team we’re playing there, and now it’s best-of-3.”

Minnesota forward Zach Parise said the only thing the Wild can do is throw out this result and put it behind them.

“We went from feeling awesome about ourselves, feeling like we can’t be beat after last game, and then we get a little dose of reality tonight,” Parise said. “We have to be a lot better, we know that.”

Minnesota was coming off a dominant performance in Monday’s 3-0 Game 3 win and Parise admitted the Wild might have come into the game “a little cocky.”

“We felt really good, and rightfully so, we felt good about the way we played the last game,” Parise said. “I don’t know if we thought it was going to be an easy game or we thought they were going to pack it in but that wasn’t the case at all.”

Wild captain Mikko Koivu saw things a bit differently when asked if Minnesota felt a little too good about itself after taking the series lead.

“I didn’t feel that. I think we knew the situation going into the game and I thought we prepared the right way but, like I said, we weren’t good enough.”

Though the talent disparity in the current matchup is not what it was when Minnesota faced Colorado in a 2008 opening-round series, the scenario has its similarities.

The Wild dropped Game 1 to the Avalanche in Denver before overtime winners by Keith Carney and Pierre-Marc Bouchard in the next two games gave Minnesota its only other 2-1 playoff series lead prior to 2015. With a chance to take a commanding 3-1 lead, the Wild was blown out by the Avalanche 5-1 and lost the series in six games.

The tone was set in its first foray into the postseason in 2003 when the upstart Wild stole road victories in both Colorado and Vancouver in the first two rounds to come home with the series tied 1-1. In each instance, of course, Minnesota was swept in Games 3 and 4 before storming back for remarkable seven-game series wins.

Even a year ago, the Wild dug themselves 2-0 holes in each round before climbing out to defeat the Avs in seven and falling in six to the Blackhawks.

It’s as if this franchise needs — and has always needed to some degree — to have its back against the wall to bring out its best with the current team serving as Exhibit A.

After 42 regular season games, Minnesota had an 18-19-5 record for 41 points, ranking 12th in the Western Conference and tied for 23rd in the NHL. The playoffs were but a pipe dream at that point.

But on Jan. 15, the Wild embarked on a jaw-dropping 28-9-3 run beginning, not coincidentally, with the acquisition of goaltender Devan Dubnyk to not only storm back into playoff contention but secure the top wild card spot ahead of Winnipeg.

With that in mind, Minnesota forward Thomas Vanek expressed confidence in his team’s ability to bounce back on Friday.

“We’ve been rebounding for three months,” Vanek said. “Again, for us it’s like I always say, ‘With a win you enjoy it and you put it behind you that night, and the loss you put it away even quicker.’”