Minnesota comes back again but Flyers ultimately pull away 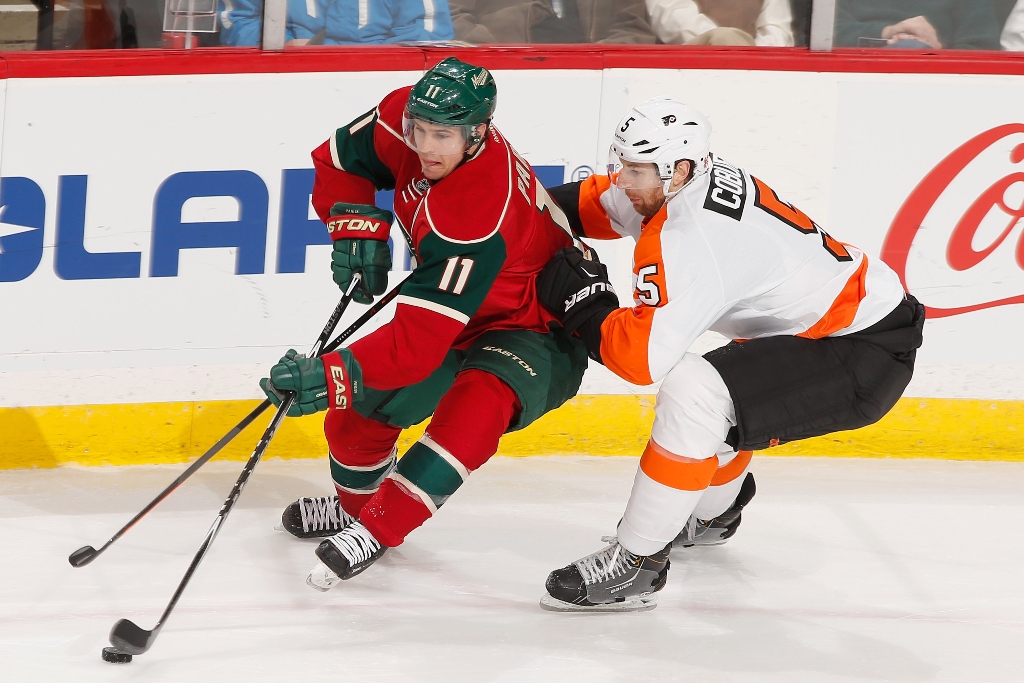 Zach Parise #11 of the Minnesota Wild handles the puck with Braydon Coburn #5 of the Philadelphia Flyers defending during the Flyers’ 5-2 victory over the Wild on December 23, 2014 at the Xcel Energy Center in St. Paul, Minnesota. (Photo by Bruce Kluckhohn/NHLI via Getty Images)

Minnesota comes back again but Flyers ultimately pull away

SAINT PAUL – It seems like eons ago when the Wild opened the season with a 5-0 win over the Colorado Avalanche on Oct. 9.

The GOALTENDING was perfect, a shutout that Darcy Kuemper duplicated in a 3-0 victory at Colorado two days later.

Minnesota started the season 7-3 and yielded just 18 goals in those 10 games.

A very good team looked super, partly because of that factor known as GOALTENDING.

The early play of Kuemper and Niklas Backstrom helped silence critics who wondered throughout the summer if the strange and mysterious malaise surrounding Minnesota’s net play throughout much of the 2013-14 campaign would haunt the Wild again this season.

Even the preseason off-ice broken foot suffered by third goalie Josh Harding, whose career is hanging by a thread because of multiple sclerosis, seemingly had little affect.

But 10 games was way too soon to judge.

The Wild figured they added strength and depth by picking up Thomas Vanek over the summer, and the decent preseason play of Kuemper and Backstrom allowed them to cut tryout goalie Ilya Bryzgalov loose.

Now, as evidenced by a 5-2 home loss to the Philadelphia Flyers Tuesday night, Bryzgalov might look every bit as good in a Wild sweater as he did while he was helping rescue Minnesota’s playoff effort last spring.

That’s because the elephant in the room for the Wild is once again GOALTENDING.

Backstrom was supposed to start against the Flyers, but was clobbered by illness.

Kuemper came in and was clobbered by the Flyers.

Minnesota, accustomed to falling behind for most of the past month, trailed 2-0 before the Wild were even able to record a shot on net.

Philadelphia scored on two of its first eight shots.

Parise, Mikko Koivu, Charlie Coyle and Matt Cooke each took a shot at addressing what might have been the Wild’s poorest effort of the season both up front and with the GOALTENDING.

The Wild have lost four in a row, yielding 19 goals in those four games. They keep falling behind early.

Even Koivu, who looks for positives after every game, found very little to praise.

“I don’t think we got even close tonight to where we should be,” he said.

Yeo said a team’s play is a reflection of its coaching and admitted that he, as well as the players, has to be better.

Although he didn’t point fingers (because 10 fingers might not have been enough) one obvious move came when he dropped Vanek off the top line in the third period.

Vanek, who has five goals, is not alone in lackluster play: Coyle scored his first goal since Oct. 23 and just his third of the season; Koivu also has just five goals and Erik Haula has just three goals and was a healthy scratch Tuesday.

He left Kuemper in the game, allowing the youngster to finish just the second of his past six starts at home, not because Kuemper was outstanding but because Backstrom went home and minor leaguer John Curry was on hand as the backup.

Kuemper faced 29 shots and gave up four goals not counting an empty-netter.

His save percentage slipped to .901, the same as Backstrom. Kuemper now ranks 55th in that department and Backstrom 56th.

After the game, no one seemed interested in laying blame, especially not on the team’s GOALTENDING.

The word never came up.

“We’re supposed to be a band of brothers that goes out each night and lays it on the line for each other,” Cooke said. “We found that last year, but just because we had it last year doesn’t mean it’s here this year. We have go out and earn the trust of each other night in and night out.”

Yeo termed his team’s play last season and earlier this season “completely irrelevant.” He noted that whether the players do some soul-searching over the NHL-mandated two-day Christmas break or forget all about hockey and simply clear their minds, they had better bring a different mindset with them when they return to competition on Saturday because they cannot sit around and wait for last year’s winning formula to reappear.

Koivu, Parise and Coyle noted that frustration in the Wild locker room is overflowing.

Cooke doesn’t see it that way.

“I’m not 100 percent sure,” he said after a thoughtful pause, “but we’d better figure it out.”

Some folks who questioned this team’s stopping power in the summer might well believe today that the key difference might be found in one word: GOALTENDING.