Wild Ride Momentum Back to Denver

Minnesota forces Game 7 with late surge in 5-2 win over Colorado. 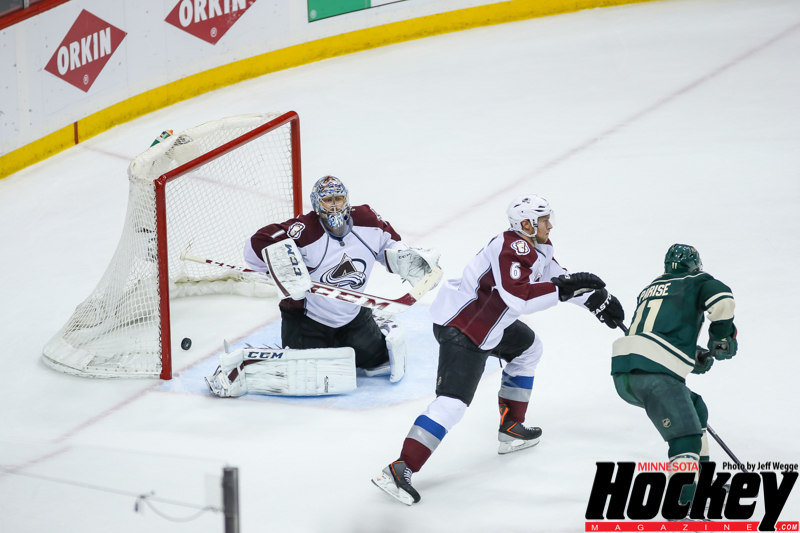 Minnesota’s Zach Parise looks on as his game winning goal crosses the line behind Colorado goaltender Semyon Varlamov in the Wild’s 5-2 win over the Avalanche in Game 6 of their Stanley Cup Playoff series on April 28, 2014 at St. Paul’s Xcel Energy Center. (MHM Photo / Jeff Wegge)

Minnesota forces Game 7 with late surge in 5-2 win over Colorado.

SAINT PAUL — Momentum is nothing if not a tenuous entity, a fact exhibited multiple times throughout the Minnesota Wild’s Stanley Cup Playoff first round series with the Colorado Avalanche. Such was the case in Monday’s Game 6 as the Wild forced a seventh and deciding game with a 5-2 win over the Avs in front of 19,314 at Xcel Energy Center.

Minnesota coach Mike Yeo said when he looked back at his team’s overtime losses, along with Colorado’s late-game rally in Game 2, one thing stood out.

“When something happened in the game that shifted the momentum, we weren’t able to get it back,” Yeo said. “This is the one game in particular where we really did a good job pushing back.”

The game’s ebb and flow saw Minnesota jump out to a two-goal lead on tallies by Zach Parise and Mikael Granlund in a dominant first half of the opening period. In fact, Parise’s goal just 49 seconds in set a new franchise record for fastest goal to start a playoff game.

The Wild, however, relinquished the cushion altogether by the five minute mark of the second but stormed back with three goals in the final 6:29 to put the game away and send the series back to Colorado for Game 7 on Wednesday night.

Up 2-0 late in the first, Minnesota was in good position to boost its lead to three with Colorado’s Paul Stastny and Andre Benoit in the penalty box. But not only did the Wild fail to capitalize on the 5-on-3, they watched the Avalanche slice the lead in half.

Ryan Suter’s partially fanned shot trickled to the Avs Ryan O’Reilly whose pass found the recently-released Stastny alone at the red line for a successful shorthanded breakaway with 3:01 to go in the first.

“It was a bad break,” Parise said. “With the shot, the shot block, the timing of the guy coming out of the box, it was a bunch of bad things happening at the same time.

“I thought that even after they did get that first goal, we had a couple good shifts to end the period so we didn’t come in [to the dressing room] feeling to sorry for ourselves.”

“At that point it gave them an awful lot of life and mentally, I think, we started to get a little bit of fear in our game,” Yeo said. “Not necessarily afraid of them, just of maybe what we’re losing. And with that we weren’t dictating, we weren’t on our toes and we kind of let them come at us.”

That’s just what the Avs did, outshooting the Wild 14-6 and outscoring them 1-0 in the second period. Minnesota had difficulty getting out of its own zone, lost most races to pucks and was completely out of synch in the offensive zone.

“I thought they had a really good second period, they had some good zone time and we weren’t as crisp as we had been,” Parise acknowledged.

The Wild entered the dressing room after 40 minutes urgently needing to find a way to seize control of the final period and stave off elimination.

“For me it was just kind of a shift mentally that we had to recognize that what we have to do here is win a period,” Yeo said. “We win a period at home and we give ourselves a chance to go play in a Game 7, so go seize that opportunity.”

To the credit of Yeo and the team’s leadership triumvirate of Mikko Koivu, Parise and Ryan Suter, Minnesota responded.

Koivu and Suter assisted on Parise’s game winner at 13:31 of the third while Jason Pominville and Marco Scandella each potted empty-net goals in the final moments to seal the win. Parise finished with a four-point night (2-2–4) with Koivu and Suter assisting on both goals.

“Guys like that usually find a way in a game like this,” Yeo said of his top players.

The challenge for Minnesota will be to carry the game-ending momentum into Game 7 and avoid another roller coaster ride on the road.

“We’ve got another level to our game and I think we’re too good of a team to be satisfied with our road play so far,” Pominville said. “We’ve got to reach that next level and find a way to win.”

“All we’ve done now is give ourselves a chance,” Yeo said. “We have to go in there and get excited about this opportunity and we’ve got to be ready to go play our best game of the series. Obviously I’m very happy that we won this game but we’re not done.”