Stopping opponents has been Wild’s key 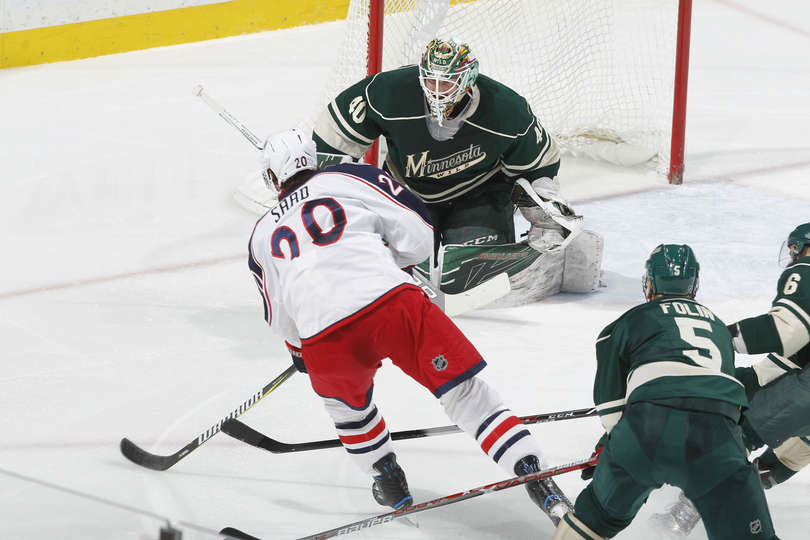 Stopping opponents has been Wild’s key

ST. PAUL — Nearly halfway through the 2016-17 season, the Minnesota Wild have assumed a heady position in the NHL.

A 12-game December win streak enabled the Wild to close out 2016 with a gaudy 23-9-4 record, placing them clearly in the hunt for a division championship and probably more.

Goaltender Devan Dubnyk, one of the key reasons for Minnesota’s success, said on New Year’s Eve that the Wild demonstrated in December precisely how well they match up against the best in the league.

“We were playing the right way and playing how we can, winning games how we can,” he said, consoling himself after the disappointment of a 4-2 loss to the Columbus Blue Jackets Dec. 31 in a battle of winning streaks.

The Wild, he pointed out, “were getting contributions top to bottom in the lineup. That’s really why we are a great hockey team: We’ve got a lot of depth and we showed that throughout those 12 games.

“We’re going to be capable of putting streaks together from now through the end of the year, and we need to do that.”

After the calendar flips to a new year, bringing with it a time for reflection, the Wild really have little reason to feel anything but optimistic.

Although their win extended the Blue Jackets’ victory streak to 15, the fact that they became the third team in four games to score four goals against Minnesota represented the only real blemish on the Wild’s December.

It was a neon sign to coach Bruce Boudreau.

“We’ve gotten away from the way we play,” Boudreau said after the loss. “Most likely because we’ve been scoring goals. You end up changing your mindset as an individual when you score goals.”

The Wild’s calling card has not been and will not become that of a prolific scoring team. Success has stemmed from a defense able to smoothly remove the puck from Minnesota’s zone, one backstopped by superlative goaltending from Dubnyk.

Boudreau gathered his troops after the loss to Columbus and told them they must win games 2-1 and 3-2.

Goalie play has been a season-long factor in such a scheme.

Dubnyk closed out the 2016 portion of the schedule with a brilliant 19-7-3 record including five shutouts, a 1.75 goals-against average and a .941 save percentage, establishing a franchise-record 10-game winning streak in the process.

Even though the Wild outscored their opponents 48-26 between Dec. 4 and Jan. 1, Boudreau said the team’s shutdown defense was the primary reason for all the W’s. Therefore, he noted without a hint of a smile, a 2-1 loss in January might leave him with a better aftertaste than a 5-4 victory.

“I’d like to personally see us getting down to two goals or less against,” he said.

That would result in wins. In pro sports, life is good when you win.

For example: December’s 12-game streak. Never before had the Wild won more than nine games in a row.

“What we did was pretty amazing,” Boudreau said.

“A fun stretch,” said forward Mikael Granlund, who collected 15 points in the final 12 games of 2016 and 29 points in 36 games. “Everybody came to the rink smiling.”

Everybody seemed to contribute during the win streak, resulting in a total team assuredness that allowed the Wild to push back against Columbus on Dec. 31, even after falling behind 4-1.

On that evening they stopped yielding scoring chances in the best way: by possessing the puck.

“We know how we need to play to be successful,” Granlund noted, adding that the four-day period between New Year’s Eve and the first game of 2017 would provide the team time to re-discover its winning formula before hitting the road. “Let’s get ready for the next trip.”

Said Zucker: “We want to be in the upper echelon in this league. If we want to do that, we have to be able to put runs together and battle through and battle against the top teams.”

The Blue Jackets might be one of the NHL’s best teams at the beginning of the new year, Zucker said, but the Wild are right there, too.