Wild too hot for Flames

Minnesota dumps Calgary, climbs within a point of Chicago 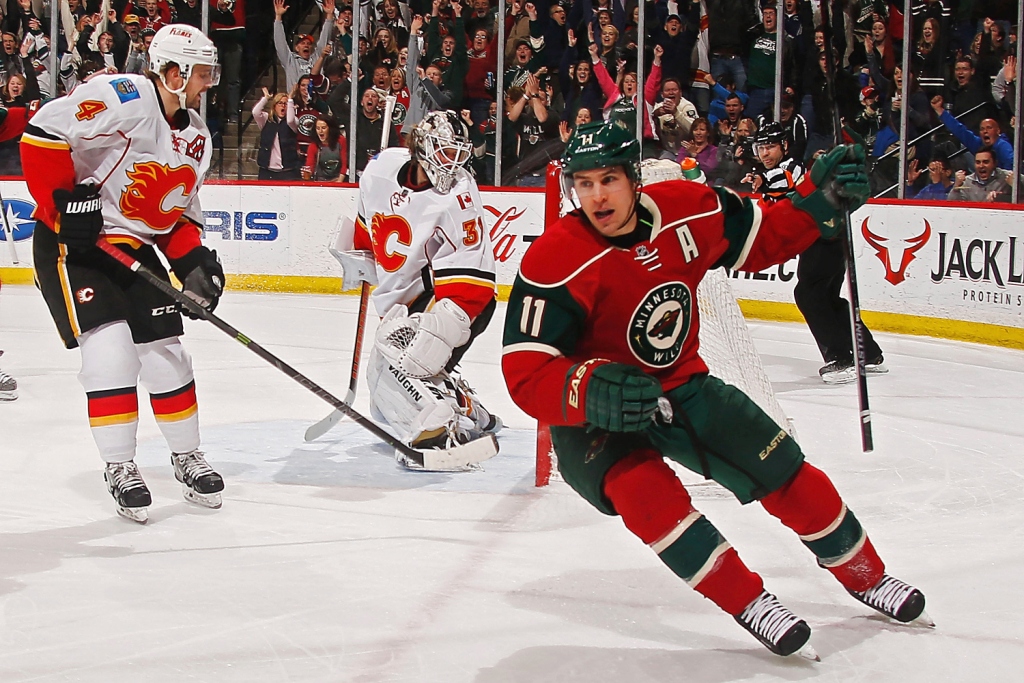 Minnesota’s Zach Parise scores his 30th goal of the season in the Wild’s 4-2 win over the Calgary Flames on Friday night at the Xcel Energy Center. (Photo by Bruce Kluckhohn/NHLI via Getty Images)

Minnesota dumps Calgary, climbs within a point of Chicago

Minnesota trampled former nemesis Calgary 4-2 in front of 19,040 Friday night at the Xcel Energy Center to move within one point of Chicago in the NHL’s Central Division.

Third-period goals by Thomas Vanek, Mikko Koivu and Zach Parise enabled the Wild – they seemed in control most of the evening – to break loose from a 1-1 tie and rack up their third consecutive win over the Flames.

Long-time Wild fans remember when the Calgary Flames used to give the Wild all kinds of problems.

Not so much any more.

The Flames, who during one stretch allowed the Wild to win just three of 25 games in Calgary, came to the X hoping to pull within two points of Minnesota in the West’s wild-card chase. Instead, they suffered a 3-0 series sweep and slunk out of town three points behind Winnipeg for the second wild-card slot, six points behind the Wild.

Calgary led Minnesota by seven points at the NHL all-star break, but since then the Wild have gone 23-5-1.

On Friday, in the first of back-to-back home games and with the Los Angeles Kings on deck, the Wild fell behind but never seemed in trouble. They outshot the Flames 36-25 and had 74 shot attempts to just 43 for Calgary.

“I think overall we were going good,” Koivu said. “We had a lot of chances, but some nights it’s not going in right away.”

It was still 1-1 in the third when Calgary’s Joe Colborne drilled Justin Fontaine into the boards and no penalty was called, inciting the crowd and coach Mike Yeo to sling a few words towards the referees because Fontaine did not have the puck.

That kind of thing, Koivu said, “gets you up.”

Fontaine left the bench momentarily, but quickly returned from the locker room, took the ice for his next shift and immediately set up Vanek for his 20th goal to make it 2-1 3:36 into the third period.

Yeo, who would only say he “strongly disagreed” with the no call, wasn’t about to say the hit woke up his team.

“I think we were pretty awake starting the third,” Yeo said, “but that was definitely a rallying point.”

Not long after UMD knocked Minnesota out of the NCAA men’s hockey tournament in New Hampshire, it was former UMD player Fontaine who set up former Gopher Vanek.

That wasn’t lost on Vanek.

“Ah, whatever,” he said to laughter from media people. “During the game it’s fine. After, I’ll go home and cry.”

Vanek’s goal was his 20th and Parise’s goal, after he stole the puck and scored on a breakaway 11:46 into the third period, was his 30th.

Maybe he should have; Parise became the fourth player in Wild history to reach 30 goals, following Marian Gaborik, Brian Rolston and Jason Pominville.

Things are pretty loose in the Wild dressing room these days, befitting a team that two months ago appeared a long-shot to get even close to 90 points this season but now has seven games remaining and a fair chance to reach 98 or more.

“It’s just a relentless effort that we’re playing with,” said defenseman Matt Dumba, whose first-period power-play goal tied the score 1-1. “We just keep going, keep going on teams, stick within our structure, and eventually it happens for us.”

It has happened so often that, after Friday night’s games, the Wild were eighth in the NHL and fifth in the West in points.

Even new fans can remember when that wasn’t the case.