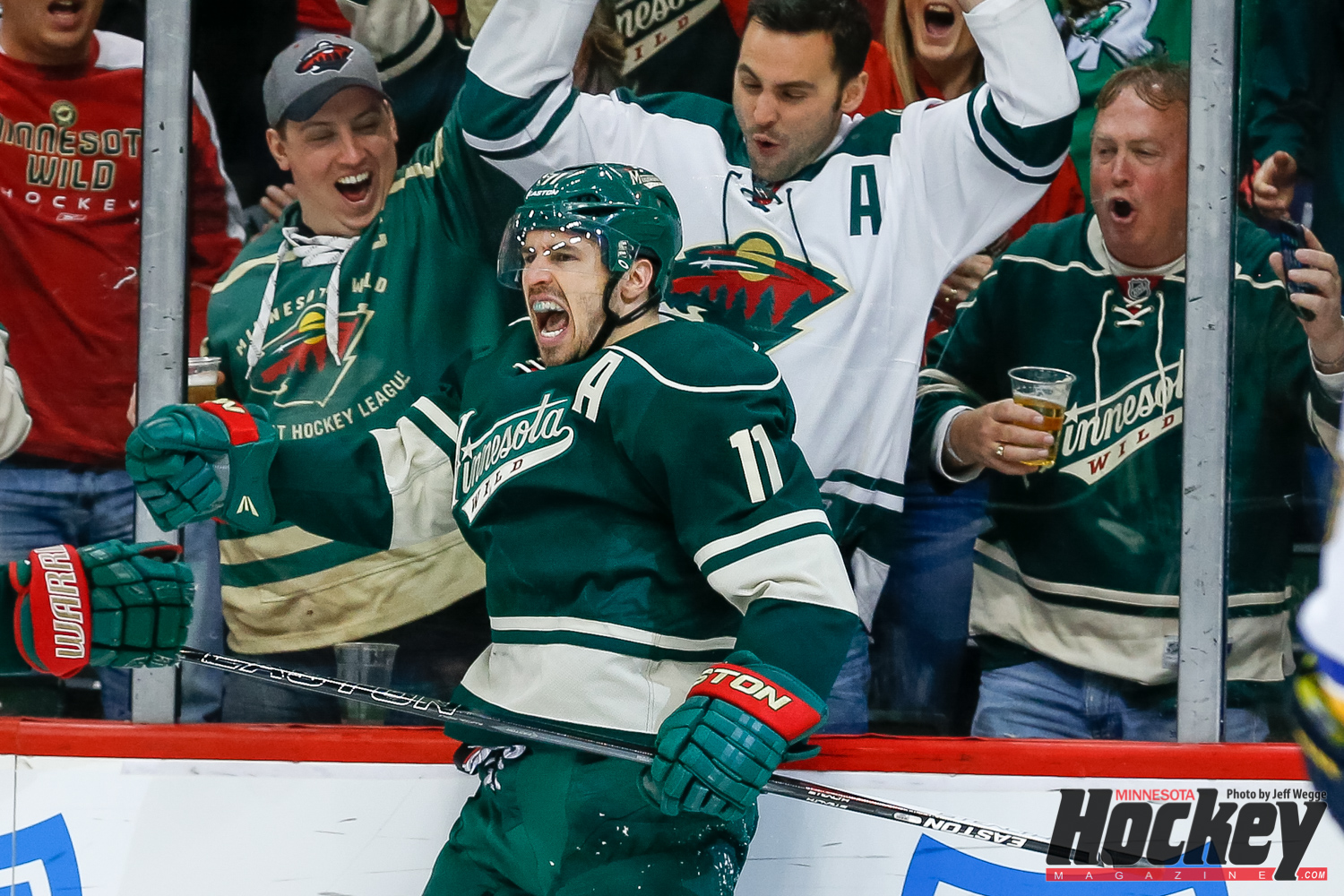 St. Paul – The Wild took a gigantic Stanley Cup Playoff step on Sunday, ousting the division champion St. Louis Blues 4-1 to advance to the Western Conference semifinals in front of 19,318 at the rocking Xcel Energy Center.

It was the first time Minnesota wrapped up a Cup series on home ice, but no one in the dressing room seemed ready to celebrate.

“We know that with this group we can continue to go even further,” Wild goaltender Devan Dubnyk explained. “That’s what everybody’s focused on right now.”

Coach Mike Yeo, whose team appeared dazed and confused in mid-January and whose job security appeared equally blurred, added perspective after the Wild had eliminated the Blues four games to two in the best-of-7 series.

“It’s a great accomplishment,” Yeo said, pointing out that it came in his team’s third consecutive visit to the playoffs, came at home and sent Minnesota past the first round for the second consecutive season. “But,” he added, “nobody’s satisfied with that.”

Dubnyk produced 30 saves and Zach Parise scored two significant goals to lead the Wild, who were stalled with a record of 18-19-5 after a 7-2 loss to Pittsburgh on Jan. 13.

Dubnyk was acquired the next day.

Winning has become so ingrained since, captain Mikko Koivu noted on Sunday, that the mid-January malaise is now ancient history.

“I don’t think we really think about that any more,” Koivu said.

Dubnyk has built a 31-11-2 record since, while Parise has been the offensive catalyst with three goals and four assists in the playoffs on top of 18 goals and 32 assists over his final 29 regular-season games.

However, Yeo cautioned, don’t get carried away with praise for any particular guy.

“This is a time to be recognized not only individually, but collectively, too,” he noted.

Parise was again the spark Sunday, notching a dazzling short-handed goal to put his team up 1-0  in the first period and adding a rebound goal just 1:01 into the third period after St. Louis had cut the deficit to 2-1 in the final seconds of the second.

Justin Fontaine scored his team’s second goal – driving Blues starter Jake Allen from the net in the second period – and Nino Niederreiter scored an empty-netter for the final margin.

As well, Dubnyk earned the numerous, boisterous cheers of “Duuuuuuuub” by giving up practically nothing.

One of those Dubnyk saves came after a second-period Matt Dumba turnover.

The SRO crowd was so amped up that a close-up of Dubnyk during James Bohn’s terrific rendition of the National Anthem even elicited a few “Duuuuub” cheers.

Now the Wild will play the Chicago Blackhawks for the right to move on to the Western Conference finals, and Parise says all the players are eating it up.

“There’s a lot of hockey still to be played,” he said, “but I think any athlete wants to be a part of the big-stage games. Bottom line, I think, all the guys did a really good job.”

Parise, too, wants to focus on looking forward.

“Don’t get me wrong,” he said. “It’s great for us to win and beat a real good St. Louis team. We should enjoy it for a couple of days and now look forward to our series against Chicago. It’s the team that’s knocked us out the last couple of years and we’ve got to be ready for them.”