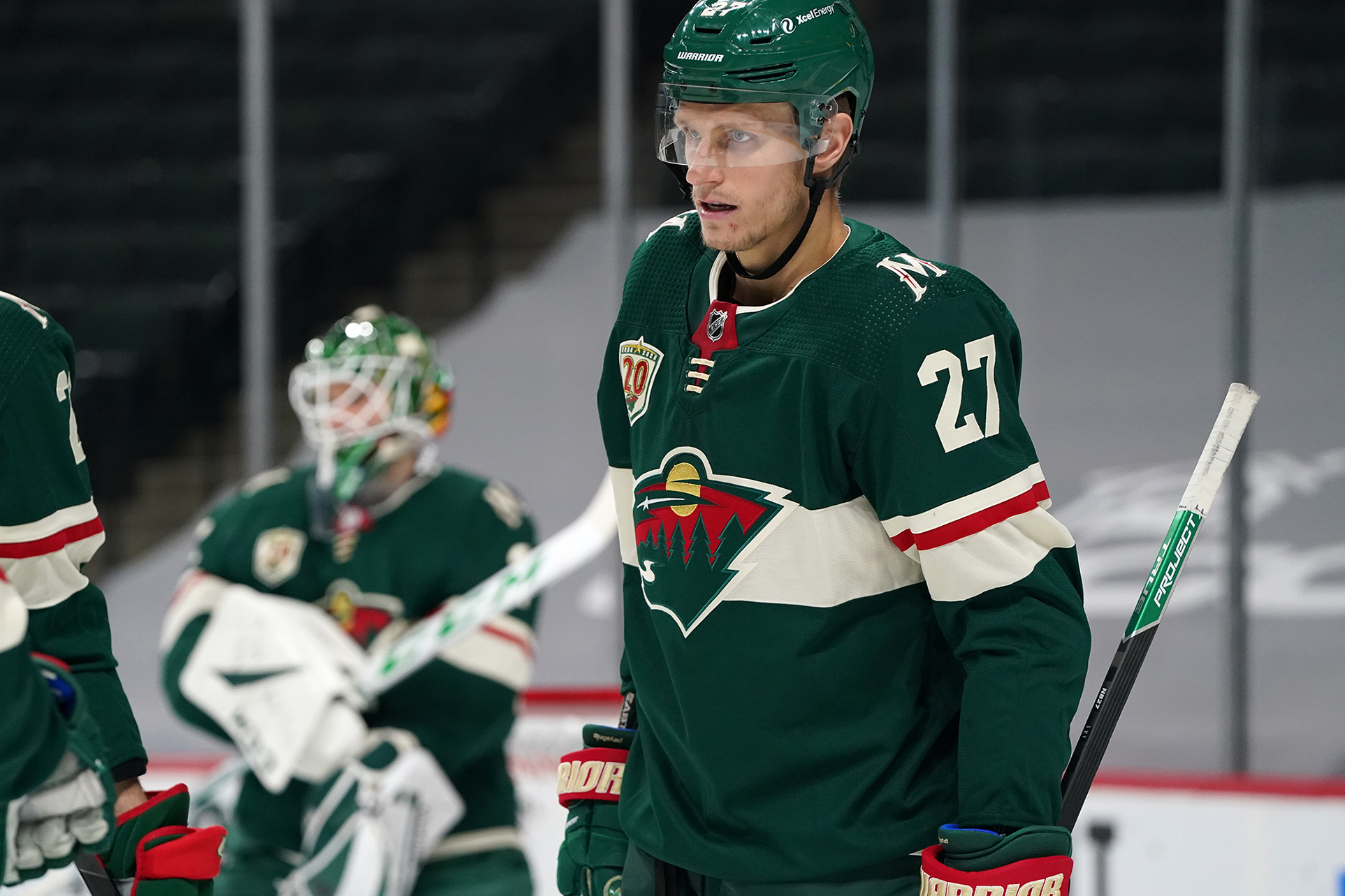 Nick Bjugstad has scored 9 of his 12 points this season on home ice. (MHM Photo / Rick Olson)

The last time the Wild played in St. Paul, it was riding a five-game winning streak with a perfect 5-0 homestand that included a trio of shutouts. They beat the first-place Vegas Golden Knights and then swept Arizona three straight games. Both Wild goaltenders hardly gave up any goals. Kaapo Kahkonen put up very solid numbers in his rookie season.

Despite a couple of dud games (the Wild got outscored 11-1) in Colorado that ended the overall streak, the Wild returned to its winning ways on home ice. A 2-1 win over the Anaheim Ducks on Monday pushed the team’s streak to nine consecutive victories at home, a new franchise record.

“It was a little bit sloppy, but not every game is going to be pretty,” said defenseman Carson Soucy. “We’re not going to have all these fancy goals. We know that we can stick with it though.”

Two goals ties the least amount the Wild has scored on its home winning streak. But every game won’t be scoring six goals with everybody all smiles, said defenseman Ryan Suter. They’ll have to grind out wins, too, he added.

“I think we’re going through a bit of a slump with energy, but we’re finding ways to win, which is important,” Suter said.

It’s true that Monday’s game wasn’t the prettiest. The first period alone seemed disjointed and saw one solid Wild scoring chance from Nico Sturm. The Wild took a pair of penalties and were outshot 10-5 in the first 20 minutes.

In the second, the Wild didn’t have a shot on goal until nearly five minutes into the period. It was more of the same type of play with not a lot of shots, not a lot of consistent offensive-zone time.

Then the Wild found themselves down 1-0 at 5:17 of the second on an unassisted goal from Troy Terry after Mats Zuccarello lost an edge with the puck at neutral ice. Terry roofed a backhander past goalie Cam Talbot.

The Wild were awarded three power plays in the second period though. Of course, that hasn’t seemed to matter much on the scoresheet for the league’s worst power play. The Wild rank 31st with a power play that came into the game 8-for-94 at 8.5%.

On the third power play, Kevin Fiala fanned on a shot. Zuccarello turned the puck over. But a minute into the advantage, Suter wound up for a shot from the point. It made it through traffic and into the back of the net, tying the game for his first goal and 10th point of the season.

Still tied in the third, the Wild generated a few strong shifts early on. Forward Nick Bjugstad tossed the puck out to neutral ice off the boards and carried the puck into the offensive zone. He passed the puck over to Nick Bonino, but that play was broken up, so Sturm took a shot that went off the end boards. Bjugstad tried to backhand the puck on net from the side. The puck went out to Soucy in the high slot who fired the puck.

“It starts in the D-zone,” Bjugstad said. “It was an all-around good shift.”

With Anaheim goaltender Ryan Miller way out of position and among bodies in front, the rebound drifted over to a waiting Bjugstad, who put the puck in the open net for the go-ahead and eventual game-winning goal.

Nine of Bjugstad’s 12 points this season have been scored on home ice. The pride of Blaine couldn’t put a finger on what exactly is so different playing at home versus on the road. Although being a fan of the rink growing up maybe helps.

“It’s nice being home, sleeping in your own bed, being around family,” Bjugstad said. “Maybe that’s it. I couldn’t tell you. It’s fun playing here. I’ve always loved the Xcel Energy Center since I was a young kid.”

In goal, which hasn’t been a problem at all for the Wild, Cam Talbot improved to 7-5-1 overall with 24 saves. He’s working on a home win streak of his own, going 5-0-0 with a 1.31 GAA and a .949 save percentage in the six games he’s played in St. Paul this season. He’s allowed one goal or less in five of those games.

Talbot came up with some big saves near the end of Monday’s second period to keep the game tied.

“Not only the saves, but his ability to recognize when we were reeling a little bit,” said Wild coach Dean Evason. “Just recognizing the feel of the team. His calming presence and leadership was very valuable tonight.”

The Wild’s nine-game winning streak started Jan. 31, with a 4-3 overtime victory over Colorado. The next one didn’t happen until nearly a month later, after the Wild sat out a couple of weeks due to a COVID-19 outbreak and had a six-game road trip.

The Wild has been one of the best teams in the NHL since mid-February and its return to play, with a big chunk of that coming during the recent 5-0 homestand.

“We’ve stressed on how we want to be dominant here,” Soucy said. “With nine in a row, we want to keep that going, keep those games, keep building off of them.”