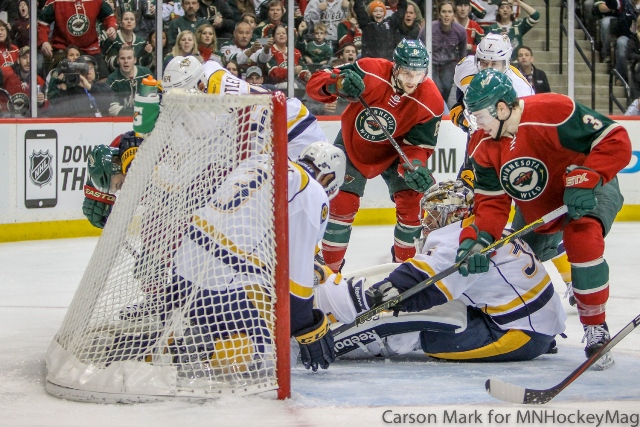 Minnesota’s Marco Scandella scored off of this scramble in the Nashville crease to tie the score 3-3 in the second period of the Predators’ overtime win over the Wild on Saturday at Xcel Energy Center. (MHM Photo / Carson Mark)

The Wild scored five goals against Nashville, including Thomas Vanek’s game-tying goal with an extra skater with 47.8 seconds remaining in regulation. Although it’s the most goals Predators goalie Pekka Rinne has given up to anyone this season, an unhappy Minnesota team was only able to take a point. The Wild was out-shot 44-27 – including a 17 minute stretch in the first and second period without a shot on goal – and lost for the third straight time, falling 6-5 in overtime.

Mattias Ekholm had the overtime winner 1:45 into the extra period. It’s the second consecutive overtime loss for Minnesota and the ninth time in 13 games the two teams have played to a one-goal game.

“That’s frustrating. You can’t give up (44) shots,” said Zach Parise, who scored twice Saturday. “You can’t do that. We gave them too many opportunities and too much zone time. We iced the puck a bunch. We had a bunch of face-offs in our own zone. They had a shooting mentality and got a lot of goals from that.”

Nashville chased Wild starting goaltender Darcy Kuemper, who had missed the previous two games because of an illness, with 3 goals on 14 shots in the first period. The last two were soft ones Kuemper likely wanted back.

He was replaced to begin the second period by Niklas Backstrom, who made 27 saves.

“I’m not going to sit here and say that it’s been good enough, but also I think that we’re not doing a great job in front of (our goaltenders) to help them get on top of their game,” Minnesota head coach Mike Yeo said about the team’s recent goaltending play. “So I think that I would say that it has been an issue, but at the same time we’ve compounded things.”

Minnesota got off a fast start 1:10 into Saturday’s game thanks to Jason Zucker’s 12th goal of the season. Playing on a line with Jason Pominville and Mikko Koivu, the22 year-old took a pass from Pominville and beat Rinne with a backhand on the team’s first shot.

The two teams spent the rest of the first period trading goals. Parise got his 12th of the season between goals by Calle Karnkrok and former Wild forward Matt Cullen. Craig Smith gave Nashville its first lead late in the first period with a backhand shot off a face-off that fooled Kuemper.

Marco Scandella tied the game at 3-3 7:18 in the second period on a strange sequence. With Mike Fisher in the box for two separate hooking penalties, Minnesota pestered the Predators with three shots. Rinne saved the first two by Charlie Coyle and appeared to have saved the third.

Initially the ruling on the ice was no-goal. After a long review, the Wild got a break. The referees determined that the puck had completely crossed the goal line and overturned their call.

Nashville got a literal bounce of its own, however. Filip Forsberg’s go-ahead goal began as a shot which went directly off the boards behind Niklas Backstrom and back to Forsberg, who buried the puck 1:48 into the third period.

Roman Josi gave the Predators a 5-3 lead on the power play eight minutes later before Minnesota came back. Parise got his second of the game and the team’s second power play goal when he tipped Jason Pominville’s shot from the point past Rinne with 9:14 remaining.

From there, it appeared the Predators would hold on before Vanek’s extra attacker goal got the announced Xcel Energy Center crowd of 19,017 believing in a comeback that was not to be.

“We have a lot of character on this team and this group and we have that,” Scandella said. “But we have to find a way to win the game and not just rally back.”

After the game, Vanek’s goal – his fifth of the season and biggest one since signing a 3 year, $18.5M contract in the offseason – was the furthest thing from anyone’s mind.

The Wild know what is at stake.  Entering Saturday’s game against the Predators, Minnesota (34 points) was eight points behind Nashville (42 points) and outside the playoff picture. It leaves Saturday discussing a message amongst one another that a 6-5 losing performance is not good enough and five points behind Los Angeles for a Western Conference wild card.

“We’re not hiding from this. We understand that this is not good enough and we’re not going to try to paint a pretty picture about it. We know that it is not good enough,” Yeo said. “Pretty simply we’re the ones who got ourselves into it.

“We need to get together here and play together and play the right way and get ourselves out of it.”

Other notes:
-Mikael Granlund (illness) was a late scratch Saturday. The Finnish forward skated in warm-ups before being replaced by Justin Fontaine.  Yeo said after the game that he had the illness which previously sidelined Kuemper instead of the mumps.

-Both Matt Cooke, out the previous 22 games with a lower body injury, and Ryan Carter, who missed the last three with an upper body injury, returned Saturday. Skating on a line with Erik Haula and Nino Niederreiter, Cooke went back to blocking shots on the penalty kill. He didn’t appear to miss a beat.

– Rinne made 22 saves for Nashville.

– With the loss, Minnesota is 3-3-2 in the month of December

– Minnesota next plays Tuesday when the Wild host Philadelphia.