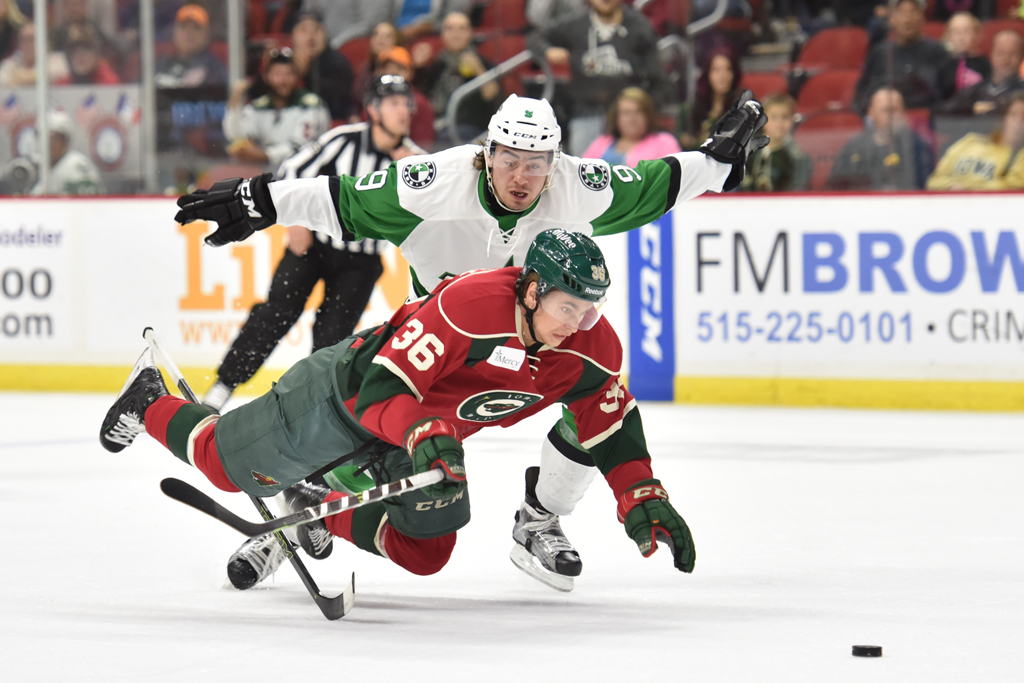 Iowa forward Michael Keranen was dragged down on a breakaway to earn a penalty shot against Texas on Saturday. His goal on the penalty shot gave the Wild a 2-1 lead to end the period. (PHOTO BY SHANE ABBOTT/IOWA WILD)

DES MOINES — After the season opener at Wells Fargo Arena in Des Moines for the Iowa Wild, coach John Torchetti said that they wanted to have around a .700 winning percentage at home this year. After losing each of their first three home games of the 2015-16 campaign, Iowa took its first step towards that on Saturday, Oct. 24 against the Texas Stars.

The Wild got their first win on their home ice and their second overall of the season with a 3-2 victory over the visiting Stars.

Torchetti said that it means “everything” to be able to win at home in front of the hometown fans.

“It’s for our fans,” said Torchetti. “This is what we play hockey for. You play for your fans and they deserve it. We could easily have three wins at home by now but we are what we are and we had to realize that and we’ve just got to keep winning and competing and once we get healthier we’re going to be a really good team and I think our fans are going to be happy with the product.”

The Wild followed the win up the next afternoon in a rematch with the Stars at Wells Fargo Arena with a 4-1 loss and saw their record drop to 2-4-1-1 (6 points).

One thing that has not struggled for Iowa so far this year is the goaltending between Leland Irving and Jeremy Smith. Smith, who is on loan from the Boston Bruins has a save percentage of .919 so far this year while Irving, who is also in his first year with Iowa, is fourth in the AHL with a .951 save percentage and allows 1.60 goals per game on average, fifth-best in the league.

Irving says it’s an extra advantage for the Wild having two goalies who are performing well as they had a back-to-back last weekend and will have three games in three nights this coming weekend.

“That’s the nice things about having two goalies that are playing well is not often do you get back-to-backs and you’re able to be fresh pretty much every time you step on the ice so I think that’s an advantage for our team for sure,” said Irving.

Irving picked up the win in Saturday’s contest against the Stars, stopping 29-of-31 Texas shots while Smith took the loss in Sunday’s game, stopping 37-of-41 Texas shots.

“Leland (Irving) really battled and he had to work because they were shooting from everywhere and you know that takes a wear and tear on you,” said Torchetti of Irving’s performance on Saturday night. “He did a great job. He made some big saves with some challenging plays.”

A player who stood out on the offensive side last weekend was Christoph Bertschy, who is in his first year as an AHL player. Bertschy had three assists through two games this weekend and leads the team with six points (2 goals, 4 assists) so far this year.

His first assist of the weekend came in the last minute of the first period against Texas on Saturday night. He stole the puck from a Texas player, made a pass to the slot and Iowa defenseman Zach Palmquist fired the one-timer home.

With the momentum Bertschy helped Iowa grab at the end of the period, Michael Keranen was awarded a penalty shot with no time left on the clock after being dragged down on a breakaway. He scored and the Wild took a 2-1 lead into the first intermission.

Bertschy notched his second assist of the night when he made a pass to Jordan Schroeder, who fired a one-timer into the net on the power play to give the Wild a 3-2 lead in the third period.

“When you finish a period like that, I mean, of course you get some confidence in the locker room,” said Bertschy. “So we try to keep on going hard and I think we did good.”

The Wild, who are in fifth place in the Central Division with the Chicago Wolves and the Lake Erie Monsters tied for first place at 3-1-0-1.

Iowa will play three games against two Central Division opponents this Friday through Sunday. They will travel on Friday to take on the Rockford Ice Hogs on Friday and then they will host Milwaukee in Des Moines on Saturday and Sunday.