Wild do gallop when they get on their offensive horse 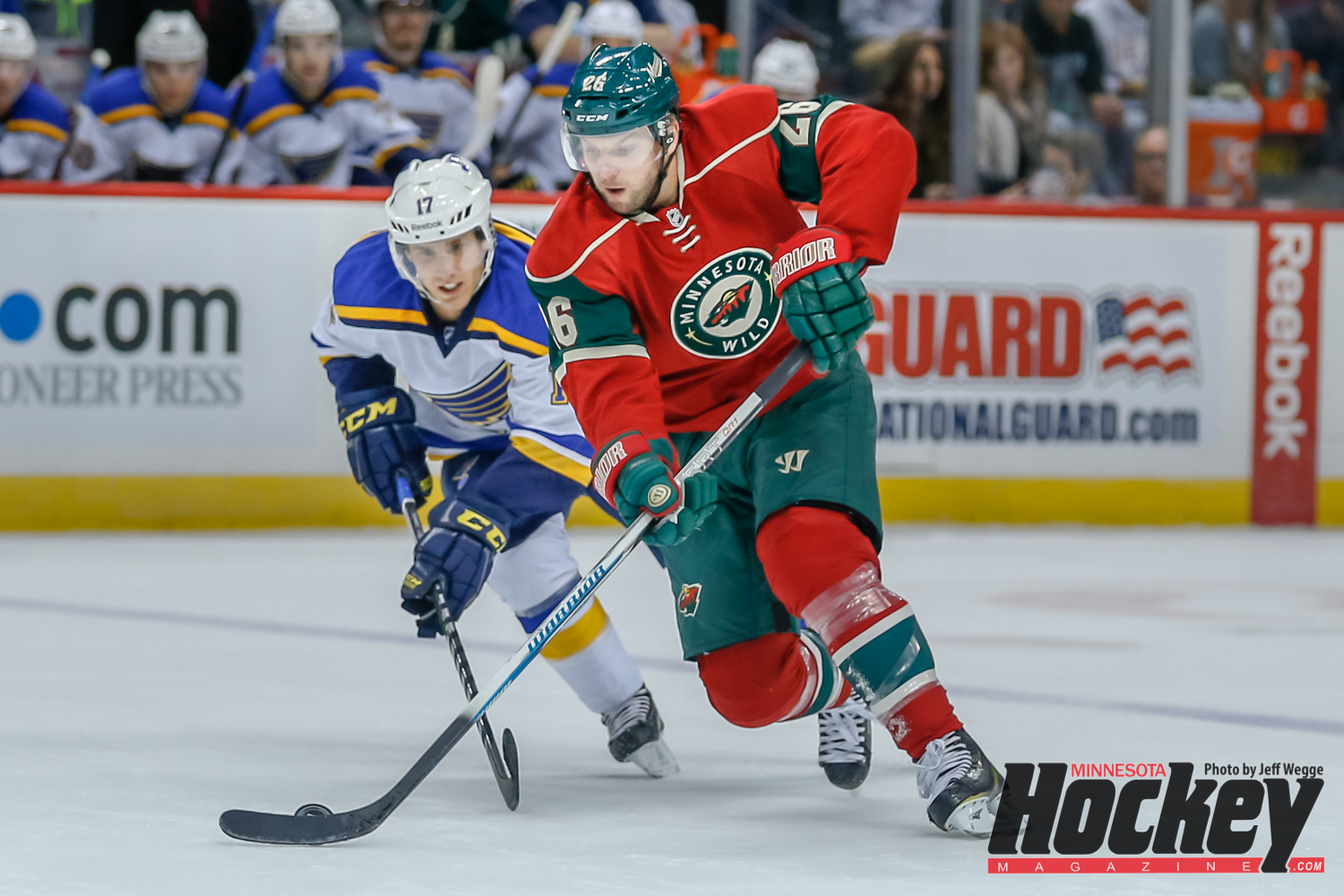 Key offseason signee Thomas Vanek is tied for second in team scoring nearing the quarter mark of the season but has yet to exhibit the goal-scoring prowess Minnesota expected when it acquired him. (MHM Photo / Jeff Wegge)

Wild do gallop when they get on their offensive horse

With Zach Parise, Jared Spurgeon and Marco Scandella back in the Minnesota lineup Sunday afternoon, the Wild did not seem to have many holes.

Heck, the back-on-track Wild displayed an interesting third line of Erik Haula, Thomas Vanek and Jason Zucker for their 4-3 home overtime victory over the Winnipeg Jets.

As the Wild inch toward the quarter pole of the 2014-15 season in the coming week, they mostly look like the potential contender that partisans were musing about after last spring’s mini-playoff run and the offseason signing of Vanek.

Two X factors are health, of course, and penalties.

The Wild dropped three of five games that Parise missed with a concussion, while Spurgeon, Scandella, Matt Cooke, Keith Ballard and Christian Folin have also been sidelined so far, not to mention No. 3 goalie Josh Harding.

Through 17 games, the Wild have lost 44 man-games to illness and injury, but this team has persevered.

While Spurgeon missed five games because of a shoulder injury and Scandella two because of illness, players such as Ryan Carter, fellow PK-specialist Kyle Brodziak and youngsters Nino Niederreiter, Haula and several others have chipped in. 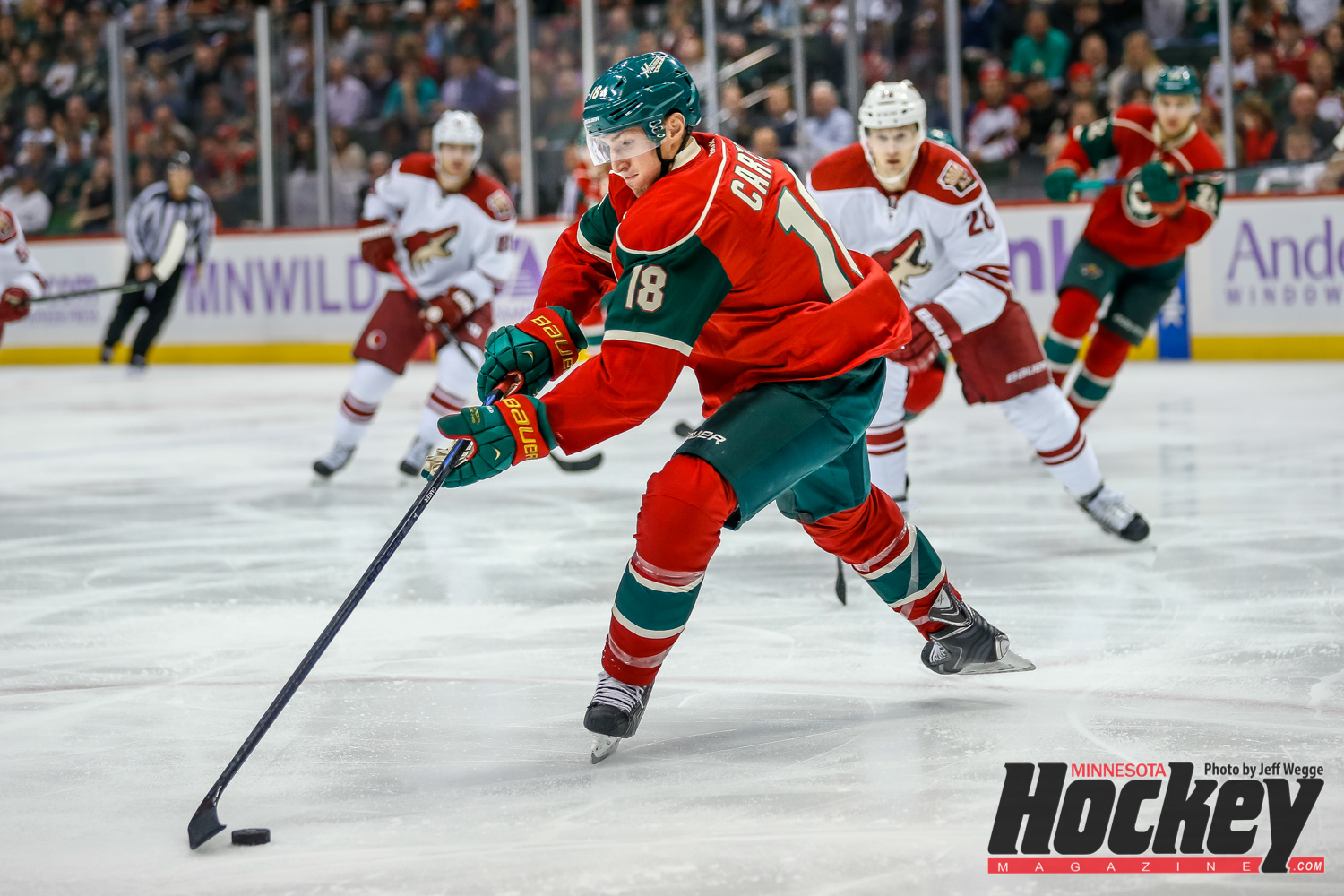 Ryan Carter has played a strong two-way game since the Wild signed him days before the season opener. (MHM Photo / Jeff Wegge)

Who figured Carter would turn into an offensive force?

The White Bear Lake product has become the surprising offseason pickup and went into Sunday’s game against the Jets tied with Vanek, Niedlerreiter, Ryan Suter, Charlie Coyle and Jason Pominville for second in team scoring with nine points, just one behind Parise.

Carter’s setup of Haula for a short-handed goal in a 2-1 road victory over the Dallas Stars on Saturday turned that game around.

Vanek picked up another assist Sunday to give him nine assists and 10 points, and most folks who watched him tear up the offensive zone when he was a University of Minnesota player for two seasons expect him to resume finding the net in his adopted home town.

His lack of goals puts him in good company – Mikko Koivu, Mikael Granlund and Coyle each have just two.

Nevertheless, Vanek, Koivu, Granlund, Coyle and others remain key ingredients in an offense that controls the puck, outshoots nearly every opponent and gives a breather to an able defense anchored by Ryan Suter, Spurgeon, Scandella and Jonas Brodin plus goaltenders Darcy Kuemper and Nik Backstrom.

The other team can’t score if it doesn’t have the puck.

One key to this, of course, is Parise. The former North Dakota star plays in nothing but high gear, rarely loses a puck battle and sets the intensity bar on 10 every time he’s on the ice.

His two goals Sunday gave him a team-high 12 points in 12 games played.

The math on that is pretty easy.

Wild coach Mike Yeo noted that it hardly matters that Parise scored two goals without using his stick Sunday, because Parise gets rewarded for doing things the right way.

“He doesn’t take short cuts,” Yeo said. “When we talked about doing something before the game and draw it up on the board, and then that first goal goes in because he does exactly what we were talking about.

The Wild took eight penalties in the second period to waylay their momentum and put themselves in a five-on-three disadvantage three times Sunday, which helped the Jets rally.

But Scandella stepped in to contribute his first overtime goal and third of the season to end it.

Parise watched the Wild stumble some while he was sidelined.

Sunday, their stumbling was less noticeable.

“At least tonight, when we weren’t penalty killing, when we weren’t in the box, we played fast, we pressured them, we forced them into mistakes,” he said. “And then we got into penalty trouble.”

“Things happen,” Yeo said. “I like that we re-grouped and went after it. We got back on the attack, and that’s the way we have to play the game. We’re a team that dictates and initiates. When we play that way we’re effective and when we don’t, we’re not so much.”

With 65 games remaining, how those factors develop will reveal a lot.