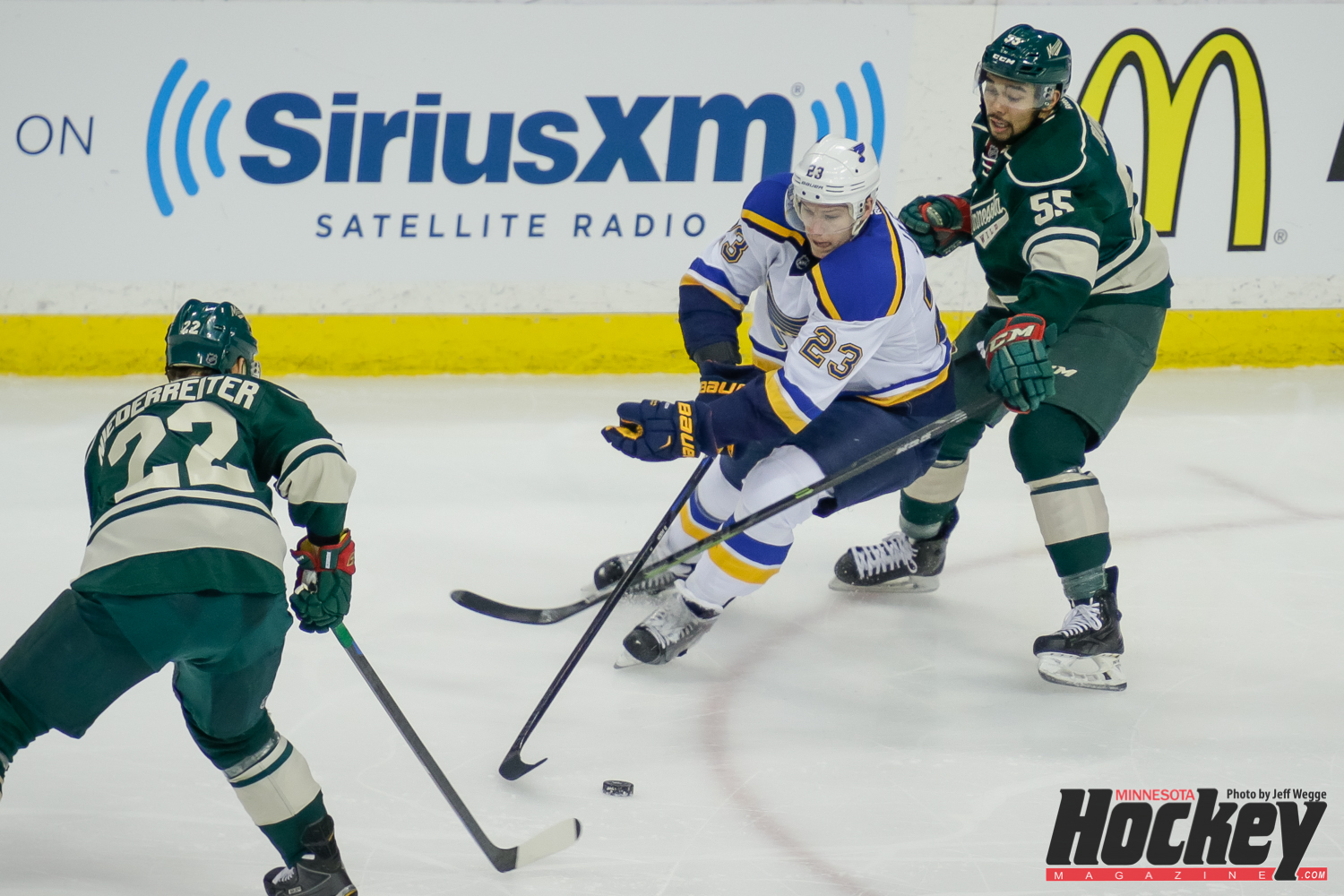 St. Paul — Through three games of the Minnesota Wild’s best-of-7 Stanley Cup Playoff opening round series against St. Louis, the Wild has mostly ignored repeated attempts by the Blues to provoke them into engaging in the post-whistle shenanigans their opponents so enjoy.

Minnesota coach Mike Yeo practiced what he’s been preaching to his team when he met the media after a convincing 3-0 Game 3 win over St. Louis on Monday night at Xcel Energy Center.  Like his players, Yeo refused to take the bait when reporters cast a particular adjective his way to describe the win.

“I’m not going to use the word dominant, but it was a good game,” Yeo said. “We knew we were going to have to be on top of things tonight and we were ready to start the right way.”

Starting the right way included holding the NHL’s fifth-ranked regular season offense to just four shots on goal in the first period and only 17 for the game in a shutout win to give the Wild a 2-1 series lead.

The Blues’ top line of Vladamir Taresenko, Alexander Steen and Jori Lehtera, which torched Minnesota for six points (3-3–6)  and nine shots in Saturday’s 4-1 Game 2 loss in St. Louis, was held without a shot through two periods and just two overall on Monday.

To make bad things worse, the trio was also a combined minus-9 on the night, spending much of their time matched up against the Wild’s top line of Zach Parise, Mikael Granlund and Jason Pominville.

With a healthy Justin Fontaine back in the Minnesota lineup, Yeo was able to reunite the fourth line of Fontaine, Kyle Brodziak and Sean Bergenheim which was so effective in the Wild’s 4-2 win in Game 1.

Again, Yeo was cautious with his words and was reluctant to single out individual players or lines for praise, but did acknowledge his fourth line’s contribution.

“I thought we were four lines deep and I thought all the D did a good job tonight,” Yeo said. “But, for sure, we need that line to bring us some good energy and they had a couple really good shifts that got the crowd going and that’s what we’re looking for from those guys.”

The Wild’s speed advantage was clear in this one, giving the Blues precious little time and space while racking up 17 takeaways to create multiple opportunities in transition.

Impressively, this was accomplished without recording a single penalty with the league’s fourth best power play (22.3 percent) poised to capitalize.

“When we play like that I don’t think there’s one team that can avoid turning the puck over,” Wild goaltender Devan Dubnyk said. “Every time there’s a pass made, our guy’s there and we’re just reading off each other … It forces turnovers and then we try to capitalize after that.

“Every single line, every pairing tonight was on top of the puck.”

Parise said from Dubnyk on out his team didn’t have any “passengers” and everyone contributed in their own way making Minnesota “tough to play against.”

“I thought our forwards did a good job of coming back and pushing them into our D and when we do that our D can stand up and have good gaps,” Parise said. “Once we do that we can get back on the counter-attack and that was a big part of the reason why we had the puck a lot.”

St. Louis defenseman Barrett Jackman said getting pucks behind the defensemen is critical having success against Minnesota and he lamented his team’s inability to do so in the loss.

“They like to have a tight gap and feed their transition, and we were feeding right into it,” he said. “We were trying to make plays in front of them instead of putting pucks behind them and that just fed to their offense and let them get the momentum in the first period.”

Minnesota made life miserable for the Blues all night, forcing them to fight for every square inch of ice between the dots.

But even when St. Louis managed to get the puck into the slot area Wild players did an outstanding job of getting in front of pucks and protecting Dubnyk to the tune of 18 blocked shots.

“Our guys are all-in for each other right now,” Yeo said. “We know that we’re playing a very good hockey team but we are a very motivated group and we have pretty decent confidence that we’ve been working for for a long time here. So again, we feel good about this game and now we’ll just get ready for the next one.”