Wild grind out another win 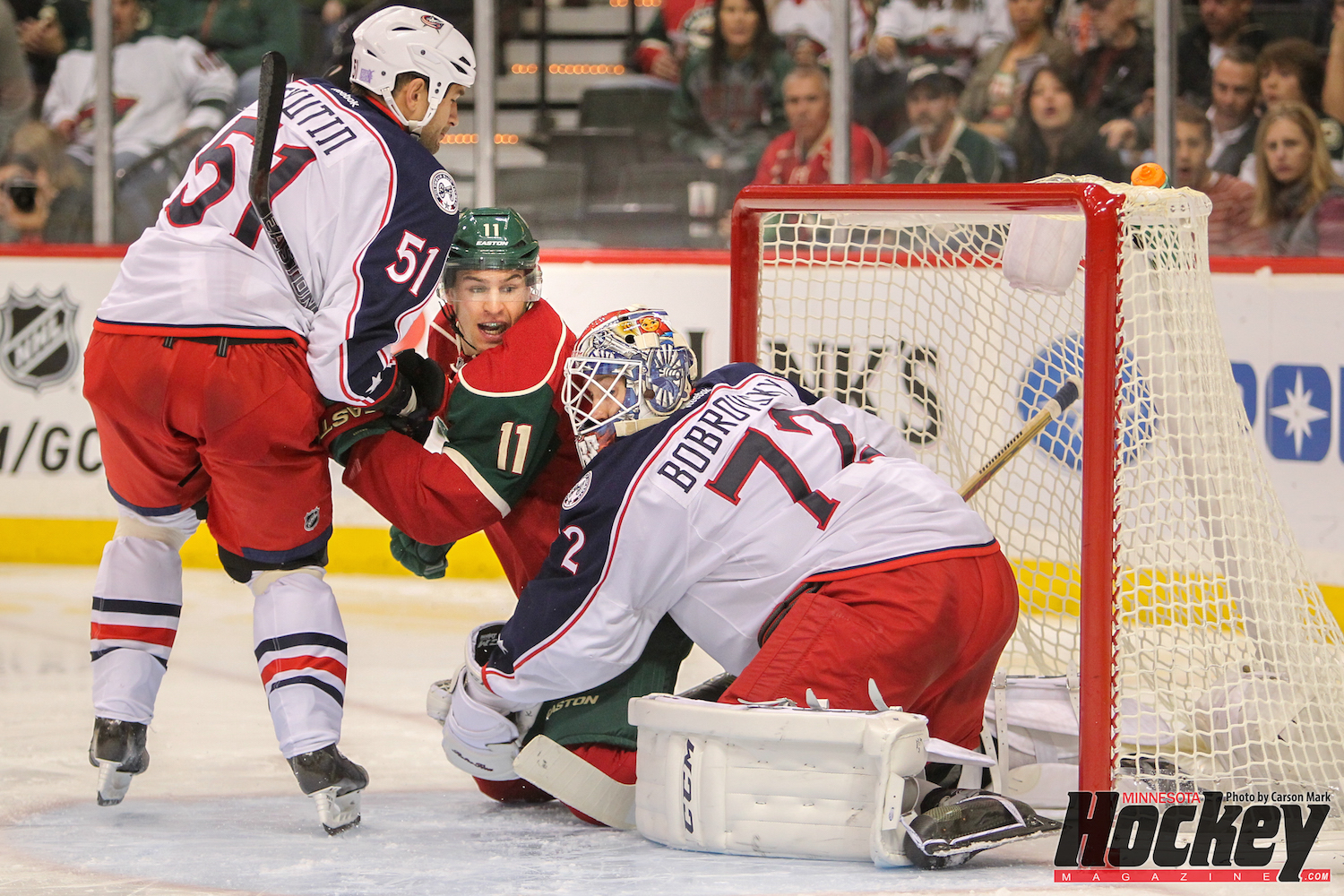 Following a pair of road losses to previously winless teams, Minnesota appeared poised to complete the hat trick against 0-7-0 Columbus. With new coach John Tortorella behind the Blue Jackets’ bench for the first time, having just replaced fired former Wild coach and Gopher defenseman Todd Richards, Columbus scored twice in the second half of the opening period to lead 2-1 at the break.

Minnesota coach Mike Yeo said he stressed to his team the importance of being ready for a hard game against a desperate team auditioning for a new coach and that’s exactly what the Wild got.

“Obviously the first period is not the way we drew it up,” Yeo said. “But what was important is we didn’t let that get to us, we found our game, we got to it and got a big win.”

After falling behind early, the Blue Jackets outshot Minnesota 13-6 through 20 minutes and played with a bit more jump in their step than did the Wild after another long layoff. But Minnesota revisited its early-season penchant for grinding out a win despite being outplayed for significant stretches. second period goals by Nino Niederreiter and Thomas Vanek turned out to be the difference.

Coming into the game, Minnesota had played just three games in 11 days with breaks of four and three days, respectively. Yeo said the current stretch of six games in 10 nights beginning with Columbus will help breed consistency.

“There’s parts of every game that are good but we’re not playing a complete full 60 minutes,” Yeo said. “We’re not unlike 29 other teams in the league right now but we’ve had all these long breaks and we just need to get into games and we have to make sure we use these games to continue to get better.”

Wild goaltender Devan Dubnyk continues to struggle to regain the form he exhibited last season through five starts, despite his 4-1-0 record which belies his 2.81 goals against average and .896 saves percentage.  Handed an early lead, Dubnyk allowed the Blue Jackets to knot the score at 1-1 midway through the opening period on a soft goal from a sharp angle.

Dubnyk got caught out high above his crease and could not recover in time and Columbus forward Alexander Wennberg’s shot from the bottom of the left circle banked off Dubnyk’s right pad and in.

“I didn’t get a good rotation, I blew my edge twice on the push,” Dubnyk said. “Those are just things I’ve got to sharpen up on and that’ll come with getting more comfortable as we go.”

Dubnyk recovered to finish with 27 saves, including a remarkable stop with his outstretched right pad on Wennberg late in the second period after saving Cam Atkinson’s original shot from the right circle. Dubnyk said the final two periods were all about positioning for him which should help in the games ahead.

“I wanted to get back in my depth a little bit as far as where I was playing,” Dubnyk said. “I kind of got back to where I wanted to be in my net in the second and third period and it gave me a chance to feel good about my game.”

The Wild’s top paid players, Ryan Suter and Parise hooked up to give Minnesota the early lead, each taking advantage of a miscue by Columbus defenseman Jack Johnson, whose first impression on Tortorella was not a good one.

Johnson carried the puck behind his own net before sending the puck up the boards where Suter picked it up in stride just inside the blue line. As Johnson drifted into the slot, his eyes fixated on Suter stickhandling into the left corner, he never saw Parise barreling toward the right post behind him.

Suter did, however, and fired a pass through the crease just as Parise arrived and he buried his league-leading sixth goal of the season behind Blue Jackets’ goaltender Sergei Bobrovsky just 5:14 into the game. Suter’s sixth assist of the year ties him for second among the league’s defensemen.

Was it a case of two long-time buddies being on the same page?

“It was more luck than anything,” Parise admitted. “I’d love to say it was chemistry or clicking but he was just throwing it in front and it hit my shin pad and it was a lucky one.”

Suter was not done assisting his close friend, coming to Parise’s aid at a critical moment midway through the third period. With Minnesota leading 3-2 and pressing to extend its lead, Parise turned the puck over to dangerous Columbus forward Nick Foligno high in the Blue Jackets’ zone.

Foligno broke through the neutral zone alone but Suter raced rink wide to chase Foligno down and ride him harmlessly into the boards to erase the threat.

“I don’t know what happened there,” Parise said of his turnover. “Yeah, he bailed me out on one there.”