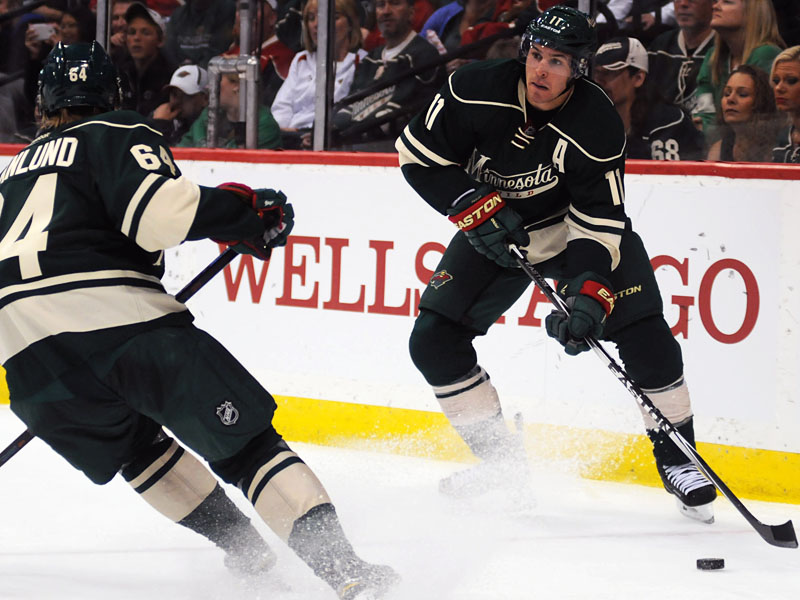 With a goal and two assists Zach Parise netted his 29th career three-point game as the Wild buried the Avalanche 5-0 at Xcel Energy Center in the season opener for both teams. (MHM Photo / Jeff Wegge)

Minnesota’s top line of Mikael Granlund centering Zach Parise and Jason Pominville skated circles around the bewildered Colorado Avalanche all evening in a 5-0 victory that was, as they say, not as close as the score might indicate.

Vanek, playing his first game for the Wild, had a couple decent chances but was most impressive by pulling the puck off the goal line behind Darcy Kuemper in the first period when the outcome was still in doubt.

Kuemper needed just 16 saves for his third career shutout and said the way Minnesota’s offense controlled the puck made the experience pretty cushy for him.

“I didn’t have to do too much tonight,” Kuemper said. “Hats off to them. What a game.”

Vanek and White Bear Lake native Ryan Carter, who was also making his debut with the Wild, were also impressed with everything they witnessed from their new team.

“I thought we played good from the first shift,” Vanek said.

Carter, a fourth-line winger who took three penalties during the game plus a facial wound from a second-period scrum at the corner of the Colorado net, was wowed by the wheeling he saw from the top line.

“You’ve got to look away every once in awhile, you know,” he said with a grin. “You can get dizzy. It’s a good problem to have.”

Even though Granlund, Parise and Pominville were a dynamic combo at the end of last season, Yeo said that when training camp began, he was not afraid to tinker with his line combinations.

The need to mess with the Granlund trio, however, simply never arose.

“They really didn’t give me a choice,” Yeo explained. “They looked even better than they did last year.”
Although the lead was 1-0 after a period, this game wasn’t in doubt for long.

The Wild ripped 21 shots on net in the second period and seized a 5-0 lead, driving Avs goalie Semyon Varlamov out of the net after 40 minutes.

But Minnesota fans need to temper their enthusiasm – it’s one of 82 games.

Certainly the Wild delivered a terrific performance to the sold-out house. Shots were 17-5 in favor of the home team in the first period and the Wild eventually approached the 50 mark, finishing with a team record 48.

“It’s a combination of us playing well, and I don’t think that they played very well,” Parise said. “Those games are fun.”

Yeo said you could query him about any Minnesota player on the ice and he’d have no trouble offering much-deserved praise.

The defense was a force throughout, led as usual by Ryan Suter, who played 25 ½ minutes and contributed a goal and an assist. He was typical of the Wild blue-liners who seemed to have no qualms about carrying the puck deep into the offensive zone, a practice encouraged by Yeo but facilitated by the forwards.

“Our offensive lines were doing a great job of making plays so we could jump into the offense,” Suter said. “It was a fun game to be out there for.”

Suter, too, wanted to inject a bit of perspective.

Yeo was alluding to the Wild’s next outing, which happens to arrive Saturday night in Denver against an Avs contingent that may be a bit angry.

“We have to be ready for a different game,” Yeo said. “That’s still a very good hockey team over there.”

The idea, Vanek pointed out, is to enjoy this win and move on.

That said, the levels of enjoyment seemed darn high all around on Thursday night.