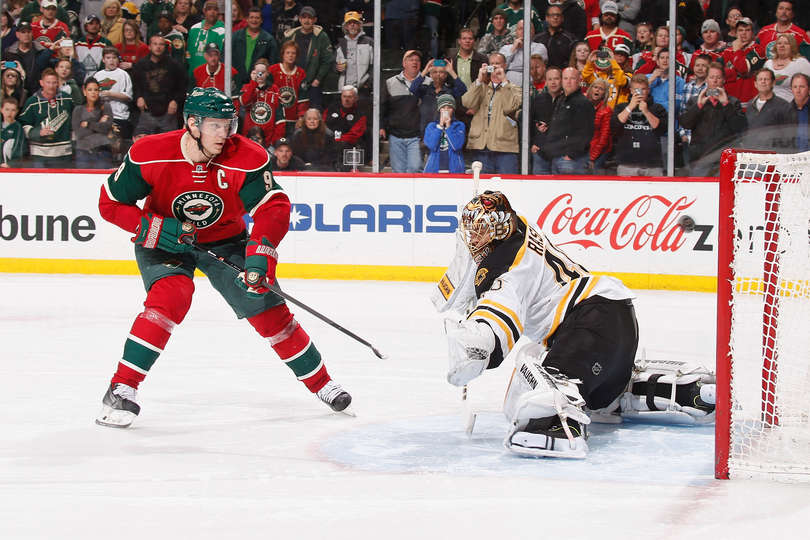 Mikko Koivu #9 of the Minnesota Wild scores the game winning overtime shootout goal against Tuukka Rask #40 of the Boston Bruins on April 8, 2014 at the Xcel Energy Center in St. Paul, Minnesota. (Photo by Bruce Kluckhohn/NHLI via Getty Images)

SAINT PAUL – An anti-climatic entrance to the second season wasn’t the whole story Tuesday for the Minnesota Wild in front of 18,893 fans on Fan Appreciation Night at Xcel Energy Center. Not even close.

That it’s not is the bigger story.

Despite Boston getting two power play goals, including Loui Eriksson’s go-ahead one late in the second, Ryan Suter’s goal with 1:05 remaining in regulation tied the game at 3 and Jason Pominville scored twice beforehand in a 4-3 shootout win over the Bruins.

“We talked about the resiliency of our group this morning and that was another good example of it right there,” a joyous Minnesota head coach Mike Yeo said after the game.

The two points were enough for the Wild to make the postseason for the second consecutive year and clinch the first Western Conference wild card spot.

The berth was no surprise, however. Needing a single point or a win by either Columbus or Nashville for its fifth trip to the postseason in franchise history, Minnesota got the good news during the second intermission following Blue Jacket Ryan Johansen’s overtime winner against Phoenix.

“Yeosie told us after the second that we were in the playoffs, but I think for us it was more about us being in on our own terms,” said Suter, whose team was trailing for all but 1:55. “I thought we went out and played a good third period … we came back and fought, Bryz played great in net.”

At that point in the game the Wild trailed Boston 3-2 despite Yeo’s team not being able to have gotten off to a better start. Following a Milan Lucic penalty 41 seconds into the game, Pominville got Minnesota on the board 1:05 into the game with a slap shot that beat Bruins goalie Tuuka Rask on the power play.

It wasn’t to last, though. The Bruins, missing Jarome Iginla and David Krejci, came back with a power play goal by Reilly Smith to snap Ilya Bryzgalov’s 145:15 shutout streak spanning parts of four games on the first Boston shot. Patrice Bergeron made it 2-1 10:28 into the first before Pominville scored his second, and 29th goal of the season, 28 seconds later.

“We did a good job staying even-keeled and not getting frustrated when times were tough,” said Pominville, who finished the night with three points and the team scoring lead with 57.

Minnesota, playing its third game in four nights, did not back down even when knowing it was in the playoffs. That’s been the way the team has played lately, going 5-0-1 over the last six games. Passes that came easy to the Bruins in the first period were stopped and Rask, who made 21 saves, was forced to make a couple of his best late.

However, Pominville, who wasn’t able to celebrate last year when Minnesota clinched a playoff berth on the final game of the season, started the scoring play that Suter finished for his eighth goal of the season.

That seemed to spark the Wild. Minnesota nearly ended the game in overtime with Massachusetts native Charlie Coyle and Matt Moulson both coming close in an exciting overtime that featured everything besides a winning goal.

Bryzgalov, who made 21 saves and hasn’t lost in regulation since Jan. 24, stopped all three Boston shooters. Rask couldn’t get a glove on Mikko Koivu’s patented shootout backhand for the only scoring in the skill competition.

The Wild still have two regular-season games against St. Louis and the Predators, but all eyes turn to a postseason which will begin next week against an opponent to be determined.

At the same time, it is entering the playoffs on a high note. Missing Mikael Granlund and having Brzygalov, the team’s fourth goalie in net this season may not be the best case scenario, but right now the 33 year-old Russian goaltender producing. So are the top players at this point in April.

“As much as we want to get to the playoffs, that’s important of course, but we want to build our game right now,” Yeo said. “I said at the time I’m glad we’re playing teams like Boston and Pittsburgh and LA and all these teams that give us a glimpse. If we want to have a chance, we’re going to have to beat good teams and we’re going to have to be at our best. We’ve put ourselves in a position where we know what our game is and there’s confidence in it.

“Like I said, I think we’re ready for the playoffs.”

But Tuesday’s shootout win remains a celebration prior to the postseason,which saw the Wild lose in the opening round to eventual Stanley Cup champion Chicago in five games. It’s a celebration, one which Minnesota blasted Macklemore’s “Thrift Shop” in the locker room; a song the team played during its first win of the year back in October. It has to be, as Parise said after the game, “getting ready for the second season is going to be a lot of fun.”