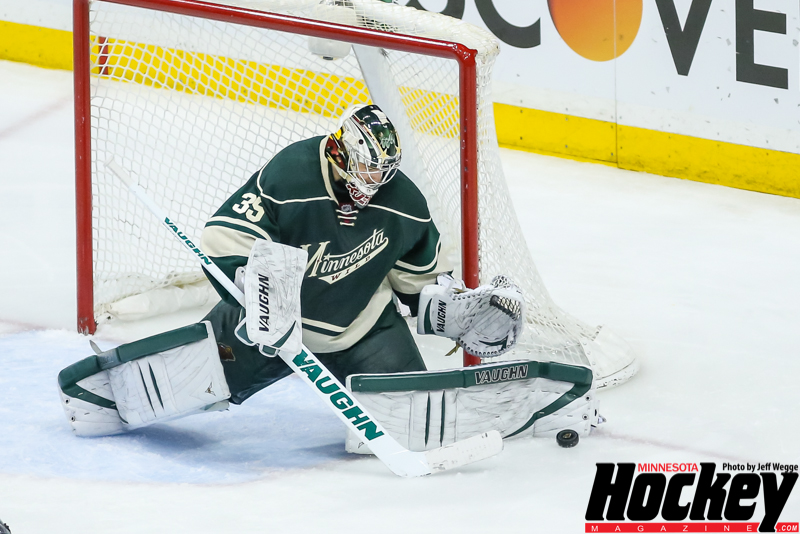 Darcy Kuemper makes one of his 11 saves in the Wild’s 2-1 win over the Colorado Avalanche in Game 4 of their Stanley Cup Playoff first round series on April 24, 2014 at Xcel Energy Center in St. Paul. (MHM Photo / Jeff Wegge)

The Minnesota Wild announced late Thursday night that the team and goaltender Darcy Kuemper have agreed to terms on a two-year contract. The one-way deal, first reported via Twitter by TSN’s Bob McKenzie, is worth $2.5 million overall and pays Kuemper $1 million this season and $1.5 million in 2015-16.

Earlier in the day, according to the Minneapolis StarTribune’s Michael Russo, Wild GM Chuck Fletcher made the decision to suspend injured goaltender Josh Harding due to the nature of his off-ice injury. Harding, who reportedly broke his right foot kicking a wall during an altercation with a teammate, will not be paid during his indefinite injury absence and his salary will not count against the team’s salary cap. Kuemper, on the other hand, will be paid and possibly more than he otherwise would have.

Kuemper appeared destined to be a training camp holdout with each side digging its heels in over the type of contract the Wild’s sixth-round selection (No. 161 overall) in the 2009 NHL Entry Draft would sign. Minnesota had been offering a two-way contract meaning Kuemper would earn less playing for the Wild’s AHL affiliate in Iowa than he would in St. Paul. Kuemper and his agent felt the 6-foot-5, 205-pound Saskatoon, Sask. native had done enough in his 32 overall NHL appearances with the Wild (13-10-4 with a 2.37 GAA, a .915 SV%) to earn a one-way deal and the guaranteed NHL salary it represented.

But with Kuemper not requiring waivers to be sent down at this stage of his young career, the two-way offer made perfect sense to GM Chuck Fletcher considering both Niklas Backstrom and Josh Harding were expected to arrive at training camp healthy. Harding’s injury, however, necessitated a change of plan despite the Wild’s signing of free-agent Ilya Bryzgalov to a professional tryout contract.

He ranked second in starts, tied for third in shutouts, fourth in SV% and tied for fourth in wins and GAA amongst rookie goalies that appeared in at least 10 games last season. Kuemper was named the NHL Third Star of the Week on March 3 after going 3-0-0 with a .970 GAA, .960 SV% and a shutout in three starts.

Wild players and coaches skate together for the first time this season tomorrow with the first group taking the ice at 8:30 a.m. at Xcel Energy Center.